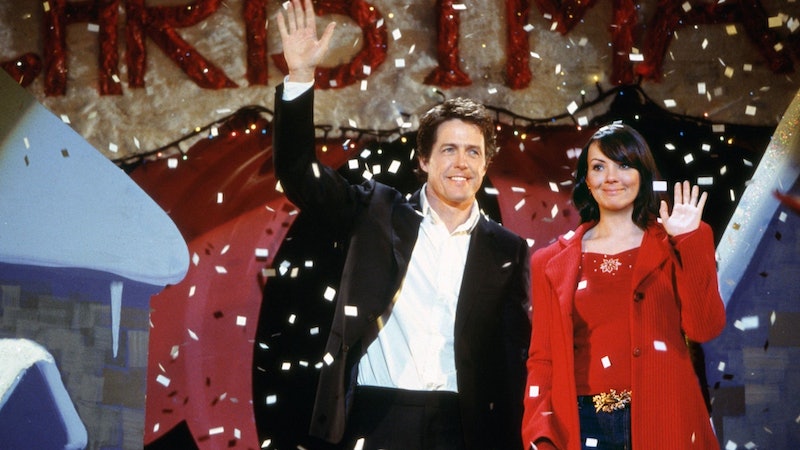 Love actually is all around. This is what I've learned from watching Love Actually every Christmas for the past dozen or so years. I also learned that Laura Linney should have never answered that phone call from her brother, that American girls do indeed love British accents (and threesomes?), and surprise orchestras playing Beatles cover songs are the perfect addition to any wedding.

According to the holiday classic, all these things are as good as facts. But despite these truisms, there are a handful of fun facts I never knew about the holiday classic. Like what, exactly, makes Billy Bob Thornton squirm, and why does the name Bernard appear in all of director Richard Curtis' screenplays? The answer to these questions, and more little known tidbits are below.

1. Billy Bob Thornton really hates antique furniture, according to The New York Times. So much so, that Love Actually co-star Hugh Grant would allegedly taunt Thornton with a piece of antique just before the director yelled "Action!" and watch him squirm in amusement.

2. There Is An Age Inconsistency

In the film, David (Hugh Grant) is the big brother of Karen (Emma Thompson), but the actress is actually 17 months older than Grant.

3. There Was An Unconventional Casting

Colin Firth's love interest in the film, Portuguese actress Lucia Moniz, was allegedly never supposed to be in the film. According to IMDB trivia, her friend sent the movie's casting director her photos, and that's how she allegedly ended up being chosen for the role.

4. The Film Was A Huge Success

Love Actually was the most rented DVD in the UK in 2004.

5. The Tiny Details Were Important

Allegedly, Director Richard Curtis and his team had a 45 minute debate to decide what color underwear Lucia's character should be wearing for the scene where she strips down and jumps in the lake, according to IMDB and Cosmopolitan.

“I wore a fat suit for Love Actually ,” she told the Telegraph in 2005. The very slender actor had to wear a fat suit to make her appear heavier.

7. Battle Of The Beers

In the Milwaukee scene, Colin's character orders a Budweiser. Ironically, Milwaukee is the home to three of Budweiser's major competitors: Miller, Pabst, and Schlitz.

The "Lake" that Lucia Moniz and Colin Firth jump into was actually only 18 inches deep, according to IMDB. Unfortunately for Firth, the water was supposedly covered with mosquitoes. The actor was allegedly badly bitten, and had to seek medical attention for his elbow, which allegedly swelled to the size of an avocado, according to The Daily Beast.

9. This Actor Didn't Want To Be Paid

Kris Mashall allegedly handed back his paycheck for the day he got to have three American girls undress him for a scene, according to BuzzFeed. He allegedly said he had such a good time, he was willing to do it for free. Atta boy!

10. Andrew Lincoln Added A Personal Touch To This Famous Scene

In the infamous scene where Andrew Lincoln's character holds up signs to tell Keira Knightley's character that he loves her, the signs were actually written by Lincoln. He told EW:

"It is my handwriting! It’s funny, because the art department did it, and then I said, “Well, can I do it?” because I like to think that my handwriting is really good."

While his character is hell bent on learning how to play the drums, actor Thomas Brodie-Sangster allegedly didn't know how to play. Luckily, his dad, Mark Sangster, plays the drums and showed his son the ropes, according to IMDB.

The word "actually" is spoken twenty-two times in the film.

13. Every Richard Curtis Screenplay Has A Man Named Bernard

When director Richard Curtis was in college, his girlfriend left him for a man named Bernard. As a literary form of revenge, Curtis writes an unpopular character named Bernard into each of his screenplays, according to The Independent. In Love Actually, Bernard is Emma Thompson and Alan Rickman's "horrid son."

In one scene, Colin accidentally insults the caterer's food to her face when he's attempting to flirt. This scene was allegedly originally written for Hugh Grant's role in Four Weddings and a Funeral, but was cut in the final edits, according to IMDB.

15. Laura Linney Was The Only Option For Sarah

Richard Curtis auditioned many actors for the part of Sarah, but allegedly kept saying he wanted someone "like Laura Linney," according to IMDB. Eventually, the casting director snapped and allegedly said: "Oh for f*ck's sake, get Laura Linney then." She auditioned, and as we know, the rest is romcom history.

16. The Airport Embraces Are Real

The airport footage at the Heathrow airport is real. A team of cameramen hung out at the airport for a week, and filmed real families, friends and lovers reuniting, according to IMDB.

17. This Actor Was Too Good At Singing

The young actor who played Joanna, Olivia Olson, actually sang "All I Want for Christmas is You" during the Christmas concert. But she had such a phenomenal voice, Curtis had to edit it in post-production to make her voice appear more child-like, according to IMDB.

18. The Nudity Had To Be Edited Out For TV

Liam Neeson is seen several times with a toothpick hanging out of his mouth. This is supposedly because after he quit smoking, he was never without a toothpick to take its place, according to IMDB.

20. Hugh Grant Did Not Want To Dance

According to director Richard Curtis in an interview with The Daily Beast, Hugh Grant did not want to do that dancing scene. Curtis said:

[Hugh] was HUGELY grumpy about it... The fault line was the dance, because there was no way he could do that in a prime ministerial manner. He kept on putting it off, and he didn’t like the song—it was originally a Jackson 5 song, but we couldn’t get it—so he was hugely unhappy about it. We didn’t shoot it until the final day and it went so well that when we edited it, it had gone too well, and he was singing along with the words. When you edit a dance sequence like that, it’s going to be a third of the length, and the bit he’s singing the words to isn’t going to be the bit of that moment, so it was incredibly hard to edit."

21. They Weren't Barbies At All

When Emma Thompson holds up two Barbie dolls for her daughter's friends Christmas presents, they weren't really Barbies. The dolls were Ken dolls dressed in drag, according to IMDB.

Unless otherwise noted, all information via IMDB.