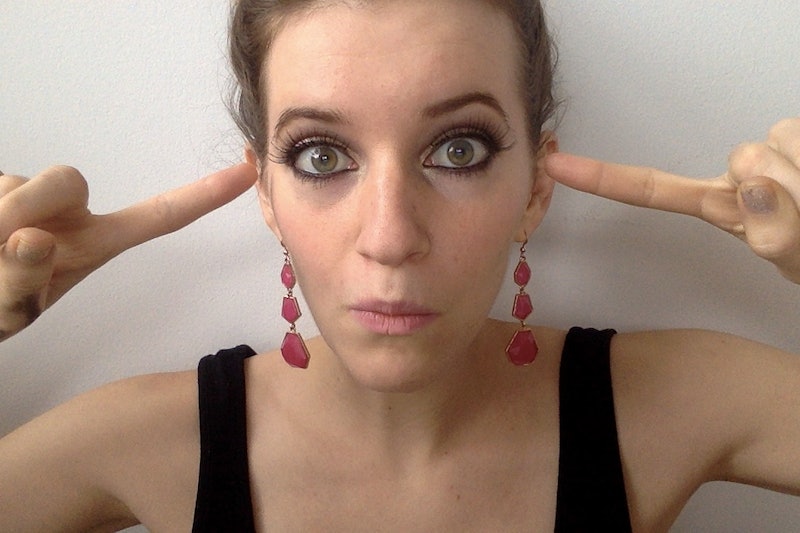 One of my great guilty pleasures in life is stalking the Kardashian/Jenner girls' Instagram accounts. Even in the most casual of their selfies, their eyes are breathtakingly huge. We're talking lashes to the moon, 360-degree eyeliner, and amazing almond-shaped contouring. The examples are numerous, and just in case you've forgotten how gorgeous they are, I've included some below.

Clearly, genetics play a large role in the girls' breathtaking eyes, but normal people have got to be able to at least mimic them, right, guys? Right? A quick Google search revealed numerous Kardashian eye makeup tutorials, but I decided to go straight to the goddess of contouring and fake lashes herself: Kim. I found a four-part video tutorial (one, two, three, four) in which her makeup artist, Stephen Moleski, demonstrates how to get the huge smoky eyes that she wore on Jimmy Kimmel Live.

I followed along religiously, stopping occasionally to take selfies.

Step one: Apply a neutral, shimmery base color over the eyelid and slightly above the crease, but leave the brow bones bare. Pretend that you're using Dior and Lancôme instead of Wet 'n' Wild.

Step two: Using a dark eyeshadow (mine was a purple-brown), start in the outer corners of each eye and blend into the entire crease, creating a sort of apostrophe shape. I had to wipe off a lot of excess, because I had way too much powder on my brush the first time, but eventually it looked vaguely Kardashian-worthy. Learn from my mistakes and wipe your brush on your hand several times before applying to your eye.

Step three: Black eyeliner all across the waterline, yo. Feel the sting.

Step four: Take the same shade of eyeshadow that you used in your crease, apply it to a q-tip or a tiny makeup brush, and smudge it along the bottom lash line. While you're at it, dab some highlighter in the corner of each eye to brighten things up. By the way, this is what my hand looked like at this stage in the process, which is great because it makes me feel like a makeup pro:

Tip: Continue to blend and re-apply as you go. For example, I realized that I hadn't blended the dark eyeshadow far enough into the crease, nor had I done the best job with covering my entire waterline, so I kept tweaking things. In the tutorial, Moleski points out that this look requires a lot of blending in order to look klassy.

Step five: Using either black eyeliner or black eyeshadow on a tiny brush, work the color into your upper lash line, sweeping it up a bit at the ends, à la a cat eye.

Tip: Since my eyeliner was so cheap, I actually held it over a candle flame for approximately half a second to get it a little more smeary/waxy. It made the eyeliner application much more smooth, but make sure to test on your hand before you accidentally scald your eyelid.

Step six: Darken and/or fill in those brows. I used a weird combo of brown eyeshadow and brown eyeliner, because who has time for appropriate "brow powder" or whatever when they're hellbent on Kardashian nirvana?

...fake eyelashes! I went above and beyond in my search for authenticity, if I do say so myself, and bought Kardashian brand lashes. And no one was more shocked than I when they turned out to be the best false lashes I have ever used. First of all, the lashes are attached to a clear strip, instead of a black one, so they look much more natural against the lash line. The adhesive is shimmery, so it's easy to see where you're applying it, but it dries clear in seconds. And the lashes are so lightweight that they slide naturally against your own lash-line and stay in place easily. Ten out of 10 stars, ladies!

After applying the lashes, I fixed any little mistakes with more black eyeliner.

I may not have a perfume deal or a mountain-sized diamond on my ring finger, but my eyes look about twice the size they normally do. I'll take it!