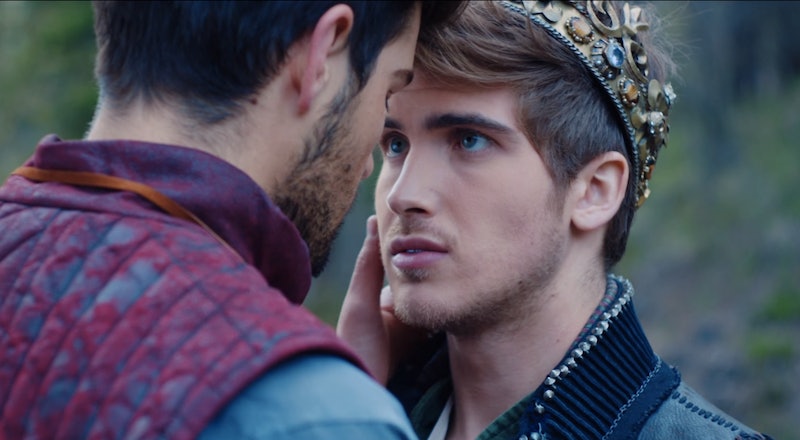 There's been a ridonk amount of hype for Taylor Swift's "Bad Blood" music video, because duh, who doesn't want to watch Meredith Grey and Olivia Benson kick some butt? But while we've been dazzled by Taylor Swift's celeb-fest, one of the most groundbreaking and adorable videos of the year snuck up on the internet and is about to steal your heart forever. YouTube star Joey Graceffa came out in his music video for "Don't Wait," which was released this past Saturday, a few days after the song hit iTunes. The song was already catchy, but holy guacamole, guys, this video will have you feeling feels you've never felt before.

The story of Joey Graceffa's character and his love interest flits artfully in and out of fantasy and reality, depicting the very real struggles he faced growing up. Playground bullies become armored goblins, his alcoholic mother becomes a well-intentioned witch, and in the end, the thing that stops him from saving his prince is a villain...who is none other than Joey himself. It all comes to a satisfying end, though, when his prince is rescued and the two of them share a steamy woodland kiss that pretty much put every other steamy woodland kiss that came before it to shame.

BOW CHICKA WHAT. Better yet, it was Graceffa's birthday yesterday when the video was released, so there were plenty more reasons to celebrate. (But really, I'd argue that this is an early birthday present to us all.)

But the best news of all is that "Don't Wait" has already hit #76 on iTunes, just in time for the release of Graceffa's memoir In Real Life: My Journey Through A Pixelated World, due May 19. In the book, the 24-year-old says that he recounts past struggles and triumphs, including childhood instances of bullying, feeling as though he didn't fit in, and finding his niche on the internet. "I feel like I am very, very fortunate to have the audience that I do, and I wanted to make the most of that and try and make a difference in this world," he said in a recent video, explaining his reasons for writing the book.

Here's the full video, but fair warning, this song is about to get stuck in your head until the LITERAL END OF DAYS (in the best way):

And just in case Graceffa didn't launch enough cute into the world this week, here's a heart-stopping photo of the stars with their mini-mes on set.

I AM SLAIN. Congrats to Joey on his insane and mounting internet success. If anybody needs me I'll be hitting the "replay" button on this video into the next dimension.