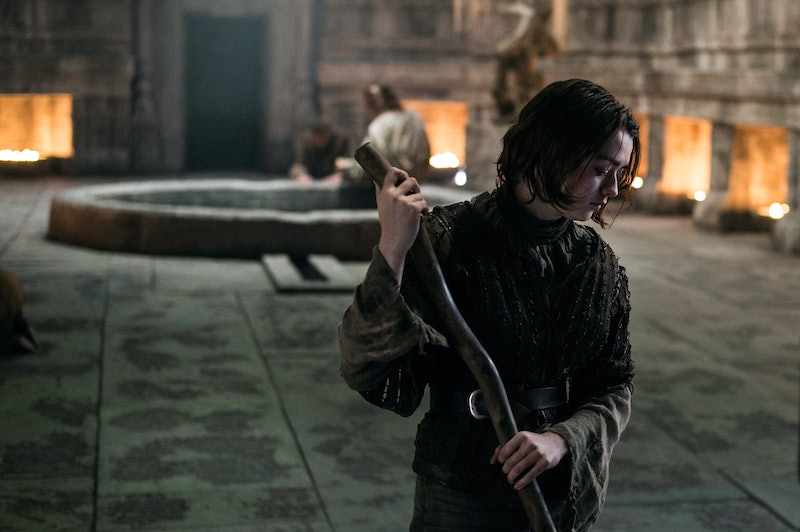 We knew that Arya Stark's journey to becoming a member of the Faceless Men wasn't going to be easy. What we didn't expect that part of her training was going to consist of cleaning dead bodies one right after the other. (Kinda makes all of our childhood chores of taking out the trash and cleaning our rooms not seem like such a big deal, right?) However, during Sunday night's Game of Thrones episode "Unbowed, Unbent, Unbroken," we got a closer look at what her other duties would entail and what continues to make these bodies pile up. First of all, let's talk about that Many-Faced God fountain which contains poisonous water, as I'm sure most of you have guessed by now.

However, unlike many other dangers that lurk throughout this show, this fountain is used as a form of mercy rather than a torture device. And it seems to be a pivotal part of Arya's training. A young child was brought to the House of Black and White by a man who had done all that he could to save his dying daughter. But after many failed attempts, all we wanted was to end her suffering — a task that Arya herself was charged with undertaking. She went to the child and lied, claiming that her father (the deceased Ned Stark) had brought her here when she was ill and that the waters had cured her. And while this did give the child false hope, it also allowed this young girl to die a painless death, just as her father wished.

It was a heartbreaking scene to watch. (Seeing a child die is always difficult, no matter how painless it may be.) However, it served as a fundamental stepping stone in Arya's transition to becoming No One. After all, Jaqen may be able to catch Arya in a fib when they play the Game of Faces, but in this case of this child, the student became the teacher. Moments later, we see Arya cleaning the child's body, now at peace after a long while of suffering, while Jaqen watched on in approval.

From there he takes her down to the Hall of Faces, which is hands down the scariest room I've ever seen. It's basically just as it sounds: a massive room full of preserved corpse faces. (Hence the faces all the Faceless Men use.) And while I'm not entirely sure how this will end up configuring into Arya's quest for vengeance, the fact that she's being let into the Faceless Men's inner circle of trust proves she's one step closer to achieving that goal.