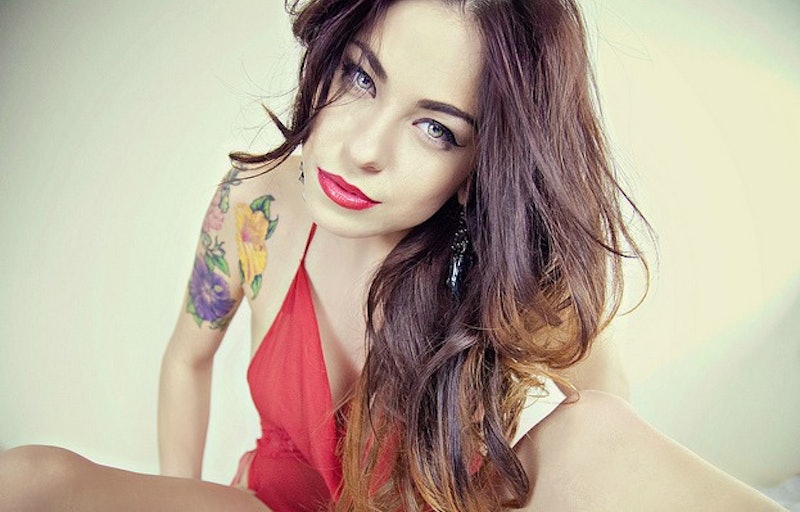 I got my first tattoo when I was 18. It was a silly little thing: A daisy on the inside of my ankle. Daisies were and are my favorite flower, so in my 18-year-old mind a daisy on my ankle, for all eternity, seemed like a brilliant idea. Since then, despite absurd opinion pieces branding tattooed women as "broken," I’ve gotten over 15 more ― tattoos, not daisies. I have literary tattoos of Fitzgerald and Hemingway quotes on my left arm, an Anais Nin quote on my rib cage, a half sleeve that’s inspired by a Vladimir Nabokov book cover, my dog’s name (because of course!), and a few more. I’m officially a tattooed girl.

As a woman with a bunch of tattoos, I find that a lot of stereotypes come a long with it. A man sees my arms all tattooed up and, if he’s the type of guy who doesn’t have any tattoos himself, he thinks I’m some sort of badass rebel, which is hardly the case once you take into consideration that I’m a walking ad for J.Crew and I wear pearl earrings from Tiffany. But as a woman who has committed herself to a lifetime of ink (and I’m hardly done, much to my mother’s disappointment), I do like to think that myself, and other women like me, are special in our own way because of our ink. Here are seven things to know about dating a woman with tattoos, aside from the fact that we’re sexy as hell.

1. She Plays By Her Own Rules

Although tattoos are far more mainstream than they ever were, it doesn’t make our individuality any less significant. And, honestly, I rarely run into women with as many tattoos as me. A woman with tattoos doesn’t care about fitting in, running with the pack, or playing by the rules others have written for her. She’s one of a kind in her thoughts and her actions. Who wouldn't want to date a woman like that?

It takes a certain brand of confidence to walk into a tattoo shop and ask to be inked with something ― anything at all, to be honest. A 2011 study found that both men and women, after getting a tattoo, had “significantly lower appearance anxiety … and significantly higher body appreciation, distinctive appearance investment, self-ascribed uniqueness, and self-esteem.”

Dating someone with healthy levels of self-esteem will not only make for a healthy relationship, but, if you’re the type who needs help in that area, you can maybe get some pointers.

3. She’s Not Afraid Of Taking Risks

Does this mean she’s going to jump out of a plane every chance she gets? Probably. I kid! But in all seriousness studies have found that people with tattoos are more likely to take risks, which also means, even if you’re not a risky sort, you’ll always have fun with her.

4. She’s Not Scared Of Pain

This isn’t to suggest each and every one of us wants to be locked up in some Red Room of Pain, but it does mean that we stare pain down and shrug it off. In other words, you break our heart, we’ll recover. However, the jury is still out on your recovery time.

5. She Doesn’t Waver In Her Beliefs

While her anti-conventionalism may keep her from wanting to get hitched or signing up for happily ever after with you, because face it, you’re probably not as awesome as any tattoo she has, an inked woman isn’t afraid to assert her conviction and stand by it. She's committed to things and doesn’t bow out when things get tough or shaky.

If you’re the type of person who dreads going to a party because you’ll have nothing to say, then you need to date a woman with tattoos. Although not every single woman gets a tattoo with some deep meaning to it, studies have found that men, especially, just love to approach women with tattoos and give them 30 questions. People also love to ask, “Did that hurt?” Yes, dumbest question of all time, but it never fails to get a conversation started.

7. She Doesn't Believe In Regret

Although we're asked over and over, "What if you regret your tattoos someday?" the fact we don't worry about such things. You don't get a tattoo with the notion of someday no longer wanting it; you get a tattoo because it's a beautiful piece of self-expression. You should never regret expressing yourself. In the words of Edith Piaf, "Non, je ne regrette rien," and that goes for all areas in our life, not just our tattoos.

More like this
Yes, You Can Buy Off-White’s New Beauty Range In The UK
By Tomi Otekunrin
Glossier’s New Olivia Rodrigo Campaign Is Giving ‘90s Groovy Chick
By Tomi Otekunrin
Kiehl’s Just Launched Eco-Friendly Cleansing Bars
By Jessica Morgan
Rihanna’s Makeup Artist Isamaya Ffrench Is Launching Her Own Makeup Line
By Tomi Otekunrin
Get Even More From Bustle — Sign Up For The Newsletter