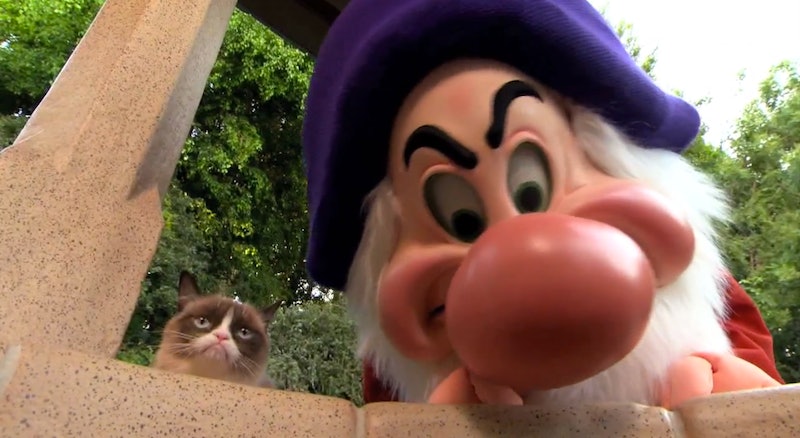 Do you ever think about how weird Grumpy Cat's life is? Featured on the front page of The Wall Street Journal and the cover of New York Magazine, hanging out a the offices of Buzzfeed, generally being one of the longer-lasting of the Internet's memes — and all because of an adorable case of feline dwarfism. Now Grumpy Cat's gone to Disneyland, and it's just as grumpy and cute as you'd expect.

In what feels like a long time coming, even though it never occurred to us before we saw this video, Grumpy Cat, aka Tarder Sauce, hung out with Snow White and the Seven Dwarves' Grumpy. They made some wishes at the wishing well, walked around in front of the castle, and just in general had a dreadful and delightful time.

You wanna know the best part, though? Grumpy Cat wasn't the only Internet meme present for the day — Ridiculously Photogenic Guy (aka Zeddie Little) was there, too. And he was just as photogenic as ever. A few dozen other Internet celebrities were there, too — it was a promotional day for the theme park — but really, who else matters?

I didn't know it was possible to ship two Internet memes together, but apparently it is, and now I kind of want to look up some G-rated fanfic about their day together.

More like this
EJ Marcus Runs The Most Wholesome Corner Of TikTok
By Alexis Morillo
Will Beyoncé Be At The BET Awards To Perform “Break My Soul” Or Attend The Show?
By Jake Viswanath
Fans React To Kelly Holmes’ “Extraordinary” ITV Documentary
By Sam Ramsden
Winter 'Love Island' Is Officially Coming Back & Twitter Has Thoughts
By Sam Ramsden
Get Even More From Bustle — Sign Up For The Newsletter