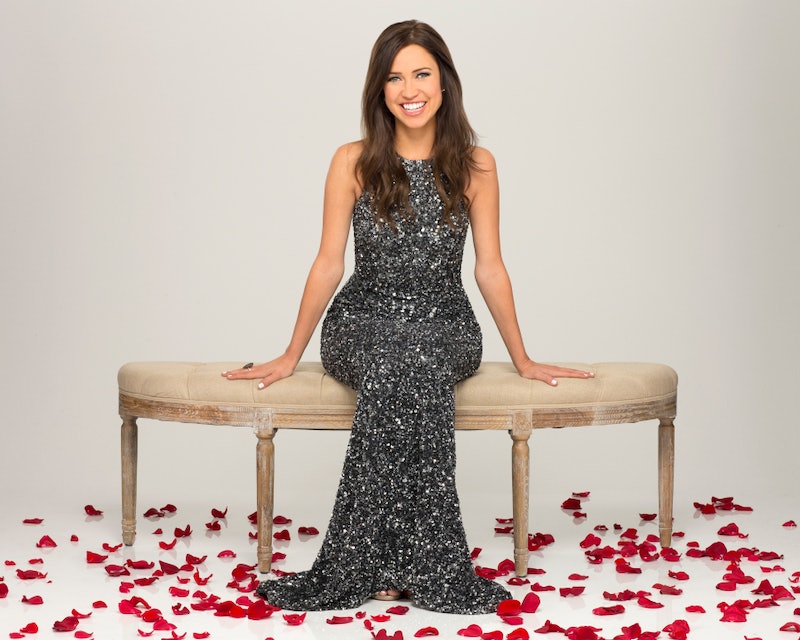 I've spent the weeks since The Bachelor finale looking forward to The Bachelorette for a lot of reasons, but mostly because it meant that Kaitlyn Bristowe would be returning to television. From the first time she got out of that limo to meet Chris Soules and made her famous joke about plowing his field, I instantly liked Kaitlyn, and through the rest of the season, she was often the comic relief, rolling her eyes at her fellow contestants anytime they acted ridiculous. And now that The Bachelorette is back, I assumed that the premiere would be littered with Kaitlyn's funny, wise comments, and I definitely wasn't disappointed. The Bachelorette premiere featured some of Kaitlyn's best quotes ever.

Because although limo arrivals are always kind of awkward, it's even more awkward when there are two of you and, based on your first impression, these guys are going to walk into that mansion behind you and vote on whether which one of you they'd rather date. And everybody knows the best way to handle an awkward situation is by cracking jokes, and nobody is better at cracking jokes at awkward moments than Kaitlyn — or being totally real, especially for reality TV.

I know it's up to the guys and not me if Kaitlyn or Britt is chosen as the bachelorette, but if I was voting? It'd totally be Kaitlyn, and these quotes are one of the biggest reasons why.

The limo introductions were ridiculously awkward to watch, so I can't imagine what it must have been like to actually live them.

"If I was going to give out a worst impression rose it would go to Ryan M."

And since he was a total douche who was falling down drunk, he basically deserved it.

This joke (which served as Kaitlyn's introduction to the guys) was way too real.

Because what else do you say when a drunk guy you just met tries to touch your butt? Ugh.

"I also enjoy your dimples, they're ridiculous."

"I know the type they pick for bachelorettes. It ain't some edgy Canadian who takes off her bikini bottoms"

But it totally could be. #TeamKaitlyn!

"I don't want to hide anything from anybody. I'm stressed."

Even though Kaitlyn met these guys in the same night, she had no problem admitting that letting them vote on whether or not she got to be the bachelorette was a super nerve wracking situation. Because duh — it is.

"Last season with Chris I really got to know him and he never even asked me about it once."

About her bird tattoo, of course.

They are pretty amazing — save Ryan the drunk guy. Fingers crossed for you, Kaitlyn!

More like this
Why Did Lace's Fake Her Birthday On 'Bachelor In Paradise'?
By Kadin Burnett
Here’s What Went Down Between Romeo, Jill, & Kira Before 'Bachelor In Paradise'
By Grace Wehniainen
Bachelorette Gabby Kissed Her New Fiancé On 'Dancing With The Stars'
By Jake Viswanath
Where Is Former Bachelor Host Chris Harrison Now & What Is His Net Worth?
By Hugh McIntyre
Get Even More From Bustle — Sign Up For The Newsletter