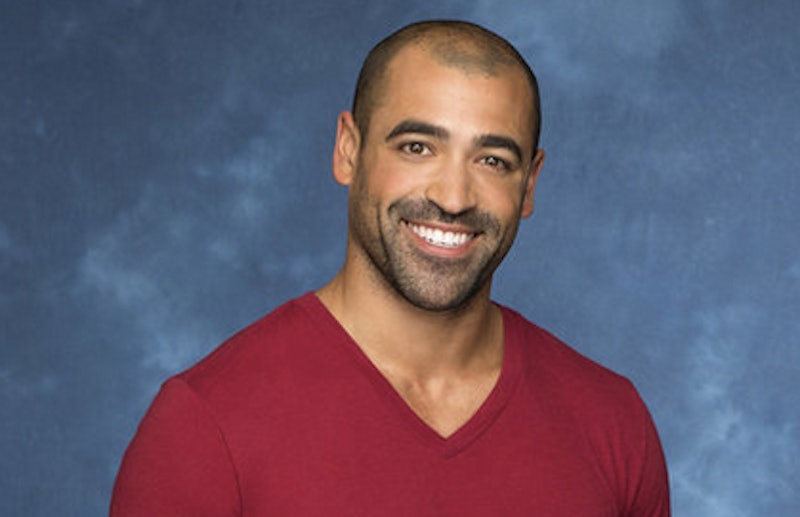 He may not have shown up in a literal car pool, or a motorized cupcake, but 2015 Bachelorette contestant Ian on Britt and Kaitlyn's season is an early frontrunner after Monday night's Season 11 premiere. Lemme rattle off some stats for you: 6'4". From L.A. Went to Princeton. Thinks marriage means honesty, openness, and vulnerability. Looks stellar in a maroon V-neck, as well as shirtless. Big time into running. Was once left for dead by side of the road. Listen, what I'm trying to say is that Ian has it all. And Bachelor Nation recognizes that. Twitter was twitterpated with love for the tall, dark, and handsome 28-year-old with a smile so bright, you could see its reflection in the universally recognizable wet entry way into the Bachelorette mansion.

Can you blame the fans for the way they feel? The rest of the cast looks lackluster next to Ian's shining star. There's drunk Ryan (no thanks), there's the weird healer who looks like he's half-dead (strong pass), and there's Jared, some self-declared Bachelorette love hero (keep walking, my man) — Ian can't help but seem like the best option. But he would stand out, even if his competition was stellar. The dude is a born competitor — he was an athlete and ran track at an Ivy. He's used to winner.

But during the opening of the premiere, Ian shared his story that he was hit by a car and left for dead. He woke up a day and half later from a coma, in the hospital. He explained that he used what he learned as an athlete to teach himself how to rebuild his body after the terrible accident. Ok Ian. You win.

But enough about that. That's in the past. What's in Ian's future? Many think he's in it to win it.

And then, well, there's this. This lady speaks the truth. Ian, please don't be too good to be true?

More like this
Bachelor Nation's Blake Horstmann Is Dating 'Love Is Blind' Star Giannina Gibelli
By Jake Viswanath and Radhika Menon
Everything We Could Expect In Gabby & Rachel’s Season Of The Bachelorette
By Kadin Burnett
‘The Bachelorette’s Michelle Young & Nayte Olukoya Explained Their Breakup
By Stephanie Topacio Long
Howard Stern's Net Worth: Is He The Richest Man In Radio?
By Hugh McIntyre
Get Even More From Bustle — Sign Up For The Newsletter