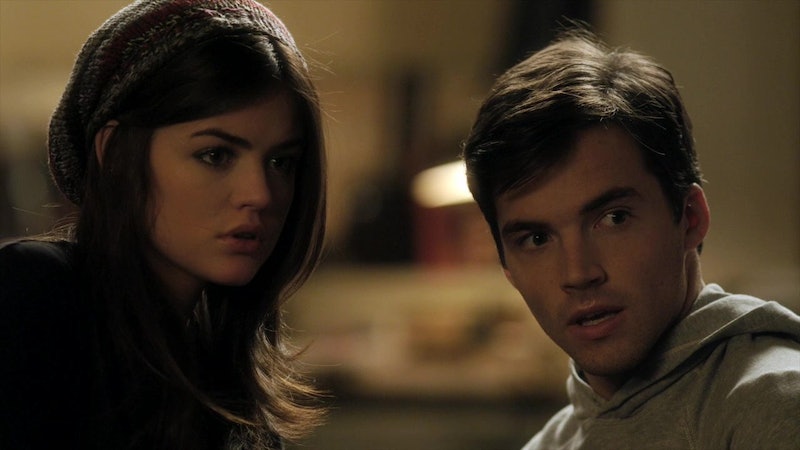 Let's not mince words here, technically, one of Pretty Little Liars' biggest 'ships, Ezria, is creepy (and illegal). I don't care how handsome Ian Harding is, how nicely he can pull off the whole sexy Santa look, or that he and Lucy Hale are actually less than three years apart in age. From the moment Mr. Fitz was revealed to be Aria's high school English teacher, I found their relationship just plain icky.

Unfortunately for us non-Ezria 'shippers though, Aria and Ezra kind of make up one of the most important relationships on PLL. They were the first to get together (they go all the way back to the pilot episode), and they've broken up and gotten back together more times than I can count. In a nutshell, it seems like the show really, really wants us all to be rooting for them — but I just... can't.

Look, I love a good forbidden love story as much as the next girl — but the bottom line is, I'm just never going to be on board with a high school teacher dating his student, no matter how many times he changes jobs, and I know I'm not the only one. So here are a few of the struggles those of us who consider Aria and Ezra to be PLL's biggest NOTP have to face every Tuesday night.

1. You Feel A Little Uncomfortable Every Time They Kiss

2. Sex Scenes Are Even Harder To Get Through

They just up the creepiness factor.

3. You Were Straight-Up Horrified When You Found Out He Dated Ali Too

At least the Aria thing started off as an investigation for Ezra's true crime novel (wait, does that make this better or worse?), but the fact that he also dated Ali when she was 15 is just too much. Sure, he might not have known about her age at first, but he basically said he was upset to learn the truth because he liked her so much.

4. You Haven't Forgiven Him For Those True Crime Shenanigans

Sure, Ezra loves Aria now, but can you think of anything creepier than a grown man seducing a high school junior in the hopes of spying on her and her friends? I think not.

5. You Weren't OK With Talia Either

One Liar in a relationship with an adult is already one too many.

6. You Roll Your Eyes Every Time Someone Calls Aria An "Old Soul"

I don't care how old your soul is, you have still been alive for 17 years!

Look, we all know Byron doesn't have a leg to stand on when it comes to the whole dating students thing, but when he forbid Aria and Ezra from seeing each other? Yeah, that actually seemed completely reasonable, seeing as he was her English teacher.

8. ...And You're Surprised Ella Is So Chill With It

She was pissed at first, but came around to her daughter's illegal relationship very quickly.

9. You Have Trouble Caring When They Break Up

10. But You Take Solace In One Of The Many Other PLL 'Ships

Whether Paily, Spoby, Haleb, Emison, or another couple entirely, you know there are plenty of other 'ships in the PLL sea.