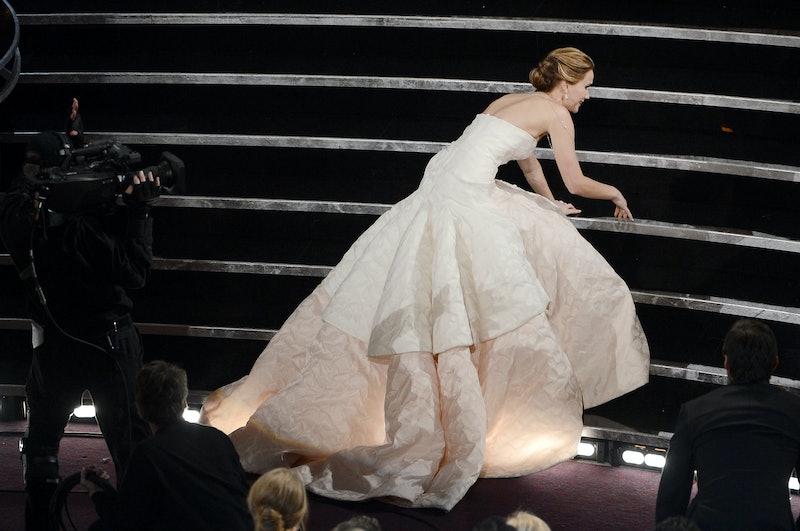 Most of us find clumsiness adorable ... in other people. Jennifer Lawrence at the Oscars, a panda falling adorably off a perch onto its head: the clumsy are the cute clowns of the world. If you happen to suffer from clumsiness yourself, however, this is not exactly a laughing matter. Some brands of extreme clumsiness are actually a sign of deeper motor problems in the brain — a sudden onset of weird knocking-stuff-off-tables can be a sign of developing Parkinson's Disease, multiple sclerosis, or a stroke. (Or, of course, just being really hungover.)

If you've just been clumsy all your life, however, it's more of a perpetual annoyance than a serious health alert — but it may make you feel better to know that you're not imagining it. Some people really are clumsier than others, and there are certain periods of life that are prime time for clumsiness. But what causes clumsiness — and can you cure it?

Clumsiness in history is linked strongly with ineptitude. The eletrocution of Charles Becker, a corrupt police officer in New York, in 1915 was known as "the clumsiest execution in the history of Sing Sing" for decades because it took an excruciating nine minutes. Interestingly, left-handers were often associated with clumsiness: the Oxford English Dictionary lists "left-handed" as also meaning clumsy, awkward, or crippled. Clumsy people don't have the greatest of reputations, it seems.

So let's take a (bruised, uncoordinated, accident-prone) journey through the science of clumsiness, and what you could do to make it go away.

Back in 2007, there was a breakthrough in the scientific understanding of clumsiness. Professor Charles "Buz" Swanik and a research team at the University of Delaware worked with athletes to discover why certain people seemed much more prone to developing accidental injuries — and found out some pretty remarkable things.

They found 80 athletes who, out of a pool of 1500, had clumsiness-related injuries (and note that these are athletes, so clumsiness due to lack of fitness or obesity was off the table). Their tests found several things that characterized the brains of the clumsy athletes: bad performance on both visual and verbal memory tests, poor equilibrium, slow reaction time, and slow "processing speed" (how fast the brain could understand new information and respond to it).

So it's not only about poor reaction time and reflexes. Clumsiness in the brain, it seems, manifests as a slower ability to pick up information from the world and make a decision about it — like, say, "move to the left to avoid that large hole" — and a seriously bad memory. We already knew that memory had something to do with clumsiness in children: a study in 1994 found that after a delay of just 15 seconds clumsy children started to forget a pattern they'd been shown, while non-clumsy children didn't. The athletes, however, confirmed it's an adult problem as well.

The processing speed difficulty, however, can be a little more complicated. Other research has found that poor processing speed and clumsiness are related to distraction: how well you cope with blocking out distracting factors, and if you can process several things at once. If you can't focus your attention, you're more likely to forget or "not see" things in your environment that could cause a problem — and crash straight into 'em.

Are There More Clumsy Times In Life?

It also seems that there are two times in life where clumsiness comes to the fore: your teenage years, and that time when you're definitely past the bloom of your twenties and thirties and heading into middle age.

Teenage clumsiness, not surprisingly, has to do with growing into a new body. It's like our mothers always told us: the sudden growth spurts leave us with long limbs and a self-perception that hasn't quite caught up yet. We're burdened with a new body that moves through space in a new way, and it often takes the teenage brain a while to catch up — particularly because they're often incredibly self-conscious and awkward in their movements. Hence: running into things. So far, so normal.

But once you get past that, you still have another clumsiness hurdle to go during young adulthood— and how well you do has to do with your "frames of reference," or what you focus on during an action. A 2013 study from Washington University found that young and older adults pay attention to different things while they're doing something: Say you're reaching for a cupcake. A young adult will focus on whatever's doing the action — in this case, their moving hand — and hence what's in its way. An older adult, on the other hand, will just focus on their own body and the object itself. So they don't tend to pay as much attention to what could bash into their hand — and crack it on the table edge.

Basically, as you get older, you shift from a frame of reference based around movements to a simpler one based around your own body and what's near it, because you're a selfish old coot. (Or because the bit of your brain devoted to framing your attention declines as you get older. Either one.)

So ... Can You Cure Clumsiness?

One of the easiest ways to change the brain habits of the chronically clumsy, it seems, is to adopt more mindfulness — which means doing every action purposefully, and giving it your full attention. Sounds hippy-dippy, but it's actually a way of focusing that frame of reference we heard about, and eliminating distraction. It's a variation on being in the zone, what psychologists call "flow" — being actively, fully immersed in an activity.

Beyond that, some scientists think the brain can be trained to be less clumsy by fixing the various aspects that seem to contribute to the problem. Improving your memory is one method, while reducing stress is another. (Stress and anxiety are massive contributors to greater distraction, so lowering them is a good idea.) There are various theories as to how to improve brain processing times, including a specialized program that "trains" the brain to react faster to stimuli — and improves memory as part of the bargain.

So you'll be a lean, mean, reacting machine — and perhaps less likely to trip when you're taking off your own jeans.