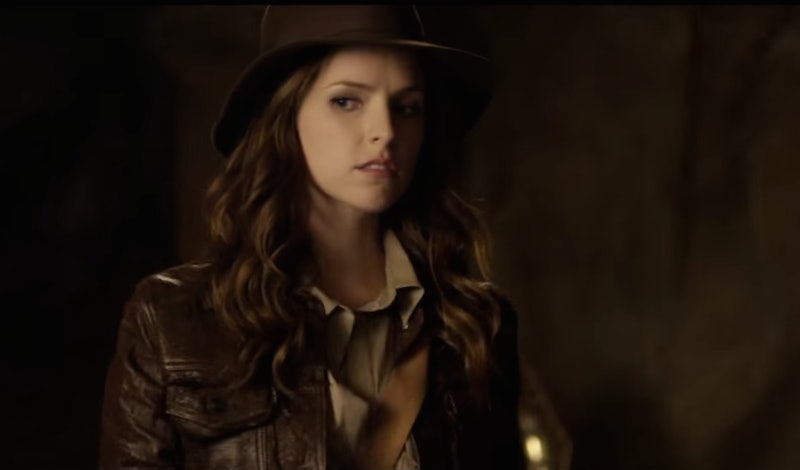 Sometimes, the Internet is a very cruel place to be. At no point was that more true than this week, when Anna Kendrick starred in an Indiana Jones parody that made my hopes rocket sky high only to dash them completely. The parody was filmed in support of Red Nose Day, a "campaign dedicated to raising money for children and young people living in poverty by simply having fun and making people laugh," according to the official website. If you watch the clip, called "Reboot: Indiana Jones with Anna Kendrick," it becomes immediately clear that this is nothing but a parody. However, my question is why? We've all heard the rumors that another Indiana Jones film is coming, so why isn't Kendrick's name on the short list of actors to play the role alongside Chris Pratt's? Why isn't the world ready for a female Indiana Jones movie?

I know what you're thinking — or, at least, from my experience with the female Ghostbusters reboot, I know what sexists are thinking. "Kadeen, why don't women get their own original stories instead of trying to ruin every little boy's dream hero by turning them into a woman?" The first half of that question is something I spend almost every day of my life asking Hollywood, but the second half of that question is something that makes me snort every time. I can speak from experience that many a woman grew up idolizing male heroes like Indiana Jones, like James Bond, like Batman, like Superman, like Captain America.

Little girls idolize these male action heroes, partially out of lack of female action heroes but mostly because they're cool. So what, exactly, is so wrong with little boys idolizing female action heroes (or the same heroes, but female)? Would society collapse? Would buildings crumble into the sea? Would my feminist agenda tear the patriarchy asunder? (OK, I'm kind of hoping for the latter...) The fact of the matter is that there is nothing — absolutely nothing — about Indiana Jones that is unique to men. I repeat: there is nothing about Indiana Jones that makes it a requirement that you have to be male to play the role, except that the original character was male. Do you know what you would have to change about his personality/story/adventures in order to make him female? Nothing.

Once again, I am relating the concept of a female Indiana Jones back to my experience with the backlash surrounding the female Ghostbusters movie. When the film was first announced, fans of the original movies were upset that Hollywood would trash the franchise by daring to cast ladies as the Ghostbusters. They questioned the need for a female Ghostbusters. They asked why there wasn't a male Ghostbusters movie being made (you know, besides the first two) or why Hollywood couldn't be more gender equal by making half the team female and half the team male. It was maddening that, after receiving two films that shut women out entirely for an all-male team, the instant the idea of an all female team was on the table, people were crying, "SEXISM!" Even worse, the sexists got their wish, as there is now another all male Ghostbusters movie in development.

But I don't think any of that is a good reason to deny the world something like a female Indiana Jones. The fight for women to get their own original stories, and their own original heroines, that aren't just subplots or co-leads in an otherwise male-led film... well, that's an entirely different fight for an entirely different day. But I believe that part of normalizing the Hollywood landscape to achieve true gender equality is making the same films that have been made and remade or even rebooted into an alternate universe — and just changing the gender of the hero to female. We've had a thousand Indiana Jones adaptations and parodies that changed everything but the hero's gender. Why should that change be the one people have the biggest problem with?