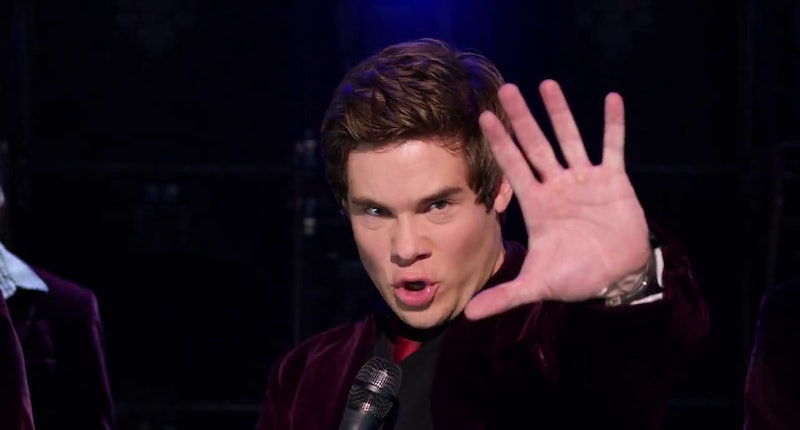 I don't want to exaggerate how much I enjoyed the movie, but it is my opinion that Pitch Perfect 2 isn't actually a Hollywood film. It is, instead, a cinematic masterpiece sent directly from the heavens to fill our hearts with toe-tapping joy, and Fat Amy one-liners. I've been singing Snoop Dog-inspired Christmas song mashups ever since I left the theatre, and can't help but giggle to myself every time I think about Fat Amy flashing her undies at the Obamas. Unfortunately, now that I've seen it, I can't help but want more, and that means I've been coming up with potential plots for Pitch Perfect 3. What will it be about the next time around? Now that I've neuroticized and fanboy'd over the idea for a few days, I believe that one hidden scene at the end of the sequel may have a clue.

One of the best things about Pitch Perfect 2 was that it went all out with the celebrity cameos. Some, however, were a little more hidden than others... While there was no missing former Bella Robin Roberts, or a capella death battle instigator David Cross, you may have checked out for the post-credits scene where Bumper auditions for The Voice.

In the scene, Bumper seems to have somehow made it onto the hit NBC singing competition, and he's actually kinda killing the song. That's when we see the real Blake Shelton, Pharrell Wiliams, Adam Levine, and Christina Aguilera with their backs to him in their judging chairs. Shelton, impressed with Bumper's skills, hits the big red button and turns his chair. Unfortunately, Bumper spazzes out, and Shelton immediately turns back around.

Fanatically obsessed with the possibilities for the third movie as I am, this has me thinking — what if the Pitch Perfect 3 was about Bumper actually making it onto The Voice? Like, what if he (or any of the characters) tried again and actually made it? Granted, there's a decent chance this is simple wishful thinking on my part. I mean, you wouldn't believe the volume of the high pitched gasp that came out of my mouth when I saw The Voice judges on the screen. Beyond my personal desire for the third movie to incorporate as much of The Voice as much as humanly possible, it also makes a lot of sense.

Much like Pitch Perfect 2 won the weekend box office, The Voice continues to pull in crazy ratings week after week, usually ranking as one of the most watched shows on TV. Not only do the numbers support the idea of further combining the two franchises, but the personalities involved are perfect for the Pitch Perfect universe. Shelton, Aguilera, Williams, and Levine love to make fun of themselves, and each other, and, if they were written to be anywhere near as scathing or hilarious as Elizabeth Banks' a capella commentator, it would be comedic perfection. (Think Bill Murray in Zombieland).

The biggest argument to pursue a plot line in which Bumper, or any of the characters, make it on to The Voice is that a good handful of the characters are desperate to legitimately make it into the music business — not the least of which is Anna Kendrick's Beca. Just imagine it. Christina Aguilera could train Beca on how to dress. Blake Shelton could teach Bumper how not to be a huge tool all the time. Pharell Williams could marry Fat Amy. Finding professional, mainstream success could be a satisfying conclusion for the characters in the series, assuming the next one is the last (and I'm totally fine if it's not).