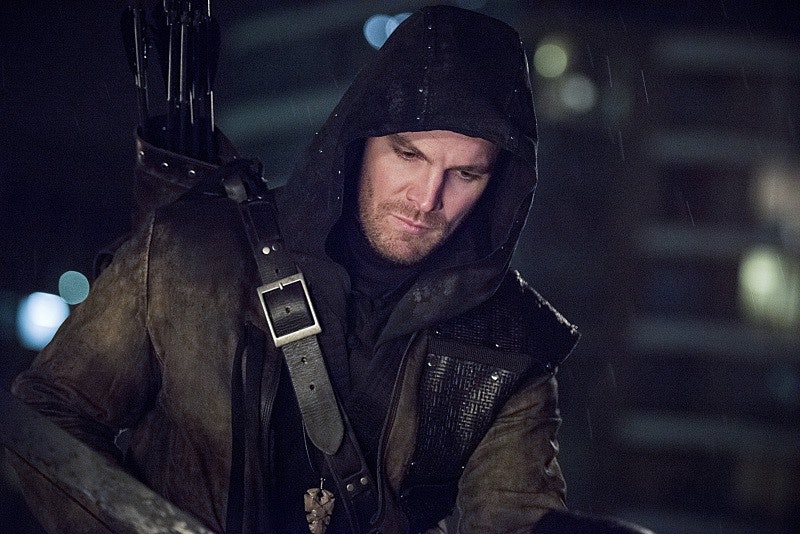 I think we can all agree that Arrow's third season had a very different feel to it than Seasons 1 and 2. Not only did it see Oliver transform into Al Sah-Him, but it also brought about a massive change to the show's entire format after the Arrow's identity became compromised. Oliver can no longer be the vigilante he once was — a fact that the Arrow Season 3 finale made sure to indicate. And while I'm eager to see where this will all lead in Season 4, I'm also just as eager to go back and re-watch some of the epic moments that this season has wrought. But in order to do that, we need to know when Arrow Season 3 will be available on Netflix. And unfortunately, for everyone involved, we have quite the wait ahead of us. Update: Netflix announced in a press release that Arrow Season 3 will be available to stream on Oct. 7.

As of now, no official release date has been announced, however, if the past is any indicator, Arrow's third installment should be up and streaming sometime in early October. You see, Netflix likes to synchronize its release dates for a show, which means Season 3 most likely won't be available until Season 4 is gearing up to premiere. And given that Arrow's last three premieres didn't happen until early October, I think it's safe to assume that's when Netflix will do us a solid and give its subscribers access to our latest Starling City adventures. It's not an ideal situation, but given that this is Oliver & Co. we're talking about, they're well worth the wait.

But just in case you're feeling a little impatient about the whole thing, I've rounded up a few pivotal episodes we have to look forward to when that glorious release date finally comes to pass. Trust me when I say, these moments deserve a second (and maybe even a third) look.

Not only were we introduced to Ray Palmer (aka The Atom), but this episode also served as a rare moment when everyone was on pretty great terms with each another. Oliver and Felicity even ended up going on their very first date. And while the end of the hour resulted in a devastating tragedy (RIP Sara Lance), it served as a crucial turning point for Team Arrow and helped launch our characters into their Season 3 story arcs.

Given how lovable Felicity has become throughout the years, it was great to finally get a bit of backstory on her character and what she was like before arriving in Starling City. This included getting our first look at Donna Smoak, Felicity's mother. Plus, we also got a few pretty great Felicity-centric flashbacks, which show our techy blonde in full goth attire. So basically, this episode was a win-win.

I only have three words for you: Arrow/Flash crossover. Nuff said.

Yes, this is the episode where we were left to believe that Oliver was dead. And while I don't necessarily revel at the thought of reliving that horrifying nightmare, it did prove to be a very great episode overall. Sara's killer was finally revealed and we were treated to a shirtless showdown between Oliver and Ra's al Ghul. Did I mention that Oliver was shirtless? Yeah, this is definitely worth a re-watch.

Nothing signifies a good episode better than a brother and sister training session on a deserted island. Well, almost deserted island, that is. Oliver and Thea encounter Season 2's big bad Slade Wilson on Lian Yu and let me just say it was a very welcome reunion. Seriously, can we bring this guy back? I love to hate him.

Aka, "The One Where Oliver and Felicity Have Sex." It was the moment all Olicity 'shippers had been waiting for and boy-oh-boy did it not disappoint. Now, if you'll excuse me, I believe there's a cold shower with my name on it.