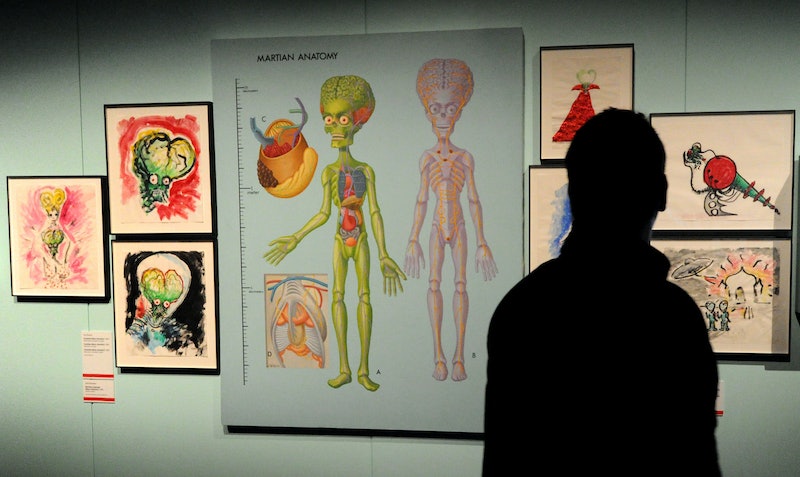 It's a great big universe out there, and scientists have now given us one more reason to be both awestruck and simultaneously a little bit freaked out. In a new study published this week out of the University of Barcelona, one cosmologist has estimated that calculations of what alien life outside our world might look like is actually off. Rather than the skinny, bulb-headed green guys or oversized flying androids that have always been portrayed in movies and television he suggested, real aliens would more likely be heavy, "bear-sized" life-forms — that is, if his math is all correct (which it very likely could be).

Fergus Simpson, a post-doctoral researcher at the University of Barcelona's Institute of Cosmos Sciences, indicated in his study that relatively unexplored planetary variables could account for a much different physical build than previously anticipated.

"Earth-like planets are expected to provide the greatest opportunity for the detection of life beyond the Solar System," wrote Simpson in his extrapolation. "This notion stems from an assumption that the Earth constitutes a simple random sample amongst inhabited planets. However, in the event that other intelligent species exist, our planet should not be considered a fair sample."

Taking into consideration Simpson's estimate that the majority of planets outside our solar system capable of sustaining life are likely Mars-sized, it's probable that any extraterrestrial life will be massive — somewhere in the range of 700 pounds, he estimated.

"Earth is our only example of an inhabited planet, so its physical characteristics appear to provide a natural template for finding life elsewhere," wrote Simpson. However, that automatic estimate is flawed, he said:

Throughout the animal kingdom, species which are physically larger invariably possess a lower population density, possibly due to their enhanced energy demands. As a result, we should expect humans to be physically smaller than most other advanced species. By marginalising over a feasible range of standard deviations, we conclude that most species are expected to exceed 300 kg in body mass. The median body mass is similar to that of a polar bear.

In layman's terms, Simpson theorized that it was far more likely that Earth is the exception rather than the rule when it comes to habitable planets in the universe. And going off of the assumption that similarly sustainable locations would be less packed, it's increasingly probable that a particular planet's life-forms would be allowed to grow much larger than humans.

But don't let their size fool you: Just because these hypothetical aliens have physically larger brains than us, it doesn't necessarily mean that they're smarter — or even capable of reaching out to us, Simpson explained.

"While larger species possess larger brains, the correlation between brain size and intelligence is weak," he wrote. "[And] higher intelligence enables the development of technologies which can sustain larger population sizes."

Basically, don't be worried about a giant army of alien polar bears hacking into our Wi-Fi and taking control of the planet — they're probably just moseying around, wondering which alien ice float is hiding the tastiest alien seals.

Bernard Bates, a professor of physics at the University of Puget Sound has his own theories on what aliens look like. Speaking with Popular Mechanics last August, Bates explained that it was likely that evolutionary biology would require life on any planet to be able to adapt to watery surroundings — but still be intelligent enough not to get eaten right away.

"An octopus is a good example of advanced-alien analogue [as they're] probably human-level intelligent and live in a totally alien environment compared to ours," Bates said. "Evolution has had to find novel solutions to the pressures they're under — pressures completely different than those that shaped mammals on land."

If you're keeping track of these horrifying suggestions, you now have to consider the possibility of giant cephalopods suctioning your face off.

Despite Hollywood's general insistence that aliens will look like Zachary Quinto or Tricia Helfer's blonde-bombshell Cylon vixen from Battlestar Galactica, it's much more probable that they won't. "Most aliens in science fiction are humanoid because humans produce science fiction," said NASA Astrobiology Discipline Specialist Michael H. New in an interview with io9 last September. "While we are interested in the 'other,' our conception of otherness is often limited."

Simpson stressed the fact that as much as humans like to believe that they're special and unique, they probably are — just not in the way we think.

"The degree to which mankind and the Earth are atypical hinges on the level of diversity among advanced life-forms," he wrote in his study. "As we have repeatedly learned from the discoveries of distant planets, and the exploration of life on our own, nature is invariably more diverse than we anticipate, not less."