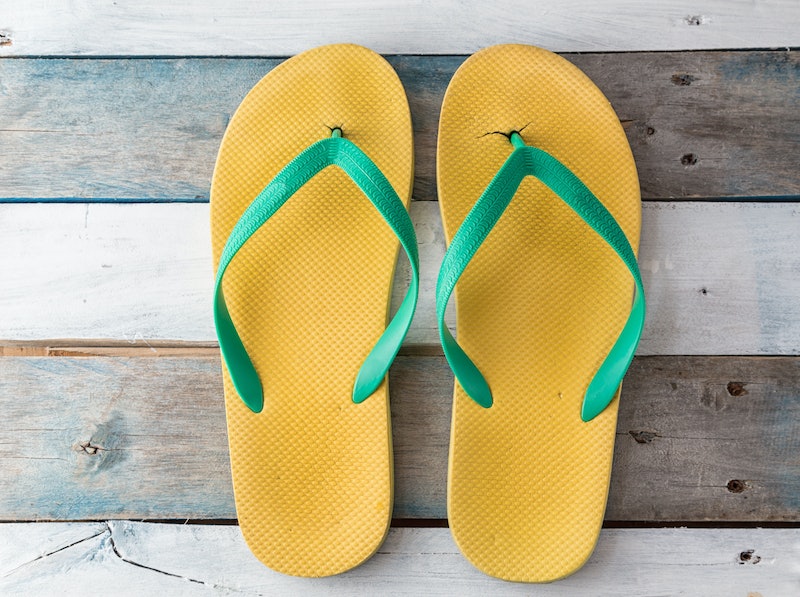 After a long day of sightseeing or running errands in your favorite flip flops, you regret not throwing on your sneakers instead. While there's never been a scientific study on the longterm effects of wearing flip flops, healthcare professionals like Dr. Arnold Raverick, a foot specialist at Washington, D.C.'s Capital Podiatry Clinic, say wearing flip flops can cause pain in the short-term.

"Flip flops weren't designed for walking around a lot," says Ravick. "Your toes buckle up to keep them on and your arches aren't being supported."

That doesn't mean you should avoid flip flops altogether. Ravick recognizes their appeal: "They're inexpensive and you can buy them in at least 12 different colors."

Though the definition of "flip flop" is pretty broad, the cheap foam ones pose the most problems, with blisters between the toes among the least of your concerns. Ravick says thicker straps and thicker heels minimize your risk for pain and injury, though you don't have to go all the way up to a wedge to avoid killing your feet. (Can you say Gwen Stefani platform sandals?) The more arch support, the better. Sandals by Fitflop, Sketchers, and Merrell, while pricier than flip flops from surf shops and bargain stores, typically fit the bill.

Even if you're not hankering to wear flip flops day to day, there's a time most people cave: vacation.

"I've had patients who said they walked all around Paris in flip flops," says Ravick. "They're going to pay for that in their feet, knees, backs, and hips."

He recommends alternating between sneakers and flip flops when playing tourist to avoid tendinitis, or inflammation of the tissue that connects your muscle to your bone. If you already suffer from chronic pain in your back or knees, wearing flip flops for long periods of time will only make it worse.

"I'll have D.C. tourists come to my practice while they're on vacation because they've spent the whole trip wearing flip flops and they got a stress fracture," he says.

He adds that the clumsiness that comes with trying to keep flip flops on your feet is also a public health concern, especially in unfamiliar territory.

"Every year, tourists wearing flip flops will get their shoes caught on Metro escalators and they'll get cut or see some other injury occur," he says.

According to Ravick, the reason a company or institution hasn't launched a scientific study on flip flops is because restricting your time in them should be common sense: "If someone paid for a study on flip flops, all they'd prove is that athletic shoes are better for your feet than flip flops, but what help is that? We know that already."

Flip flops may not cause as much pain as, say, stilettos or pointy-toed shoes, but they're still not a podiatrist favorite. If they're your favorite kind of shoe, think twice about living in them.