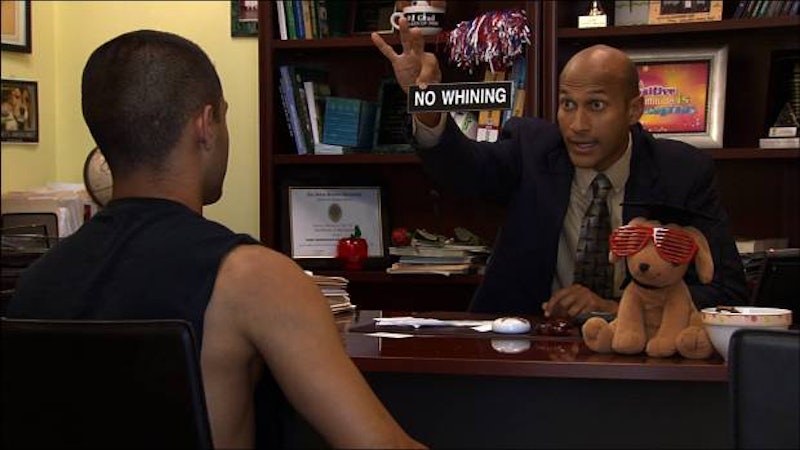 When funding fell through for the project filmmaker Jason Strouse was hoping to shoot, he got creative — very creative. A teacher at the time, the father and comedian was offered a chance to use his workplace environment as the backdrop for a film. "I wasn’t planning on making a movie about teaching at all," Strouse says. But when the opportunity was handed to him, with the intention that the film would create work/study opportunities for the school's students, he agreed, and Teacher of the Year was born.

"Matt Skala, our DP, is a real perfectionist, and when I told him his second AC would be a sixteen-year-old, he went berserk," Strouse says. "He was telling me he wouldn’t let the kid do anything. I knew this wasn’t just any kid. He’s one of the smartest high school students I’ve ever been around. Sure enough, by the third day of production, Matt had him carrying the camera. He even let him shoot some footage, and then he hired him as an intern after we wrapped."

Teacher of the Year surrounds the eccentric — yet somehow relatable — faculty of a fictional southern California high school. When Mitch Carter wins the state's Teacher of the Year award, he must decide to climb the ranks and take a tempting offer out of state, or stay at the job with the students and co-workers he (sort of) loves.

"The kids weren’t compensated at all, but you wouldn’t have known it from their effort. The pros couldn’t believe what a good job they were doing," the teacher says. "I loved having the kids on the set. They were so enthusiastic, and their excitement really rubbed off on the actors and the crew."

The film offers a handful of hearty laughs, thanks in large part to the movie's comedic co-stars — notably Keegan-Michael Key, the Sklar brothers, Larry Joe Campbell, and Jamie Kaler.

"I’ve known Jamie Kaler and the Sklar Brothers forever," the director says, explaining that Key, who plays the school's upbeat and no nonsense principle, had seen Strouse's previous work and was impressed. "He told me to let him know when I had something good for him. Once I wrote the script, I called him. Initially, he said he couldn’t do it because it interfered with the Key & Peele production schedule," he says. "I said, 'Just read it. If you do, you’re gonna agree to be in it.' I sent it to him, and he called me that night and said he’d move around the Key & Peele schedule so he could do the film. I’ll always be grateful to him for that.”

So how did the seasoned actors mesh with the kids? "We had a lot of veteran talent working with us, and everyone was having a great time hanging out with the students," Strouse says. "I was a much warmer set than you usually see. I think it’s a big reason why everyone involved with the film has such a strong emotional attachment to it."

See Teacher of the Year, available on most digital platforms, now. Watch the trailer below: