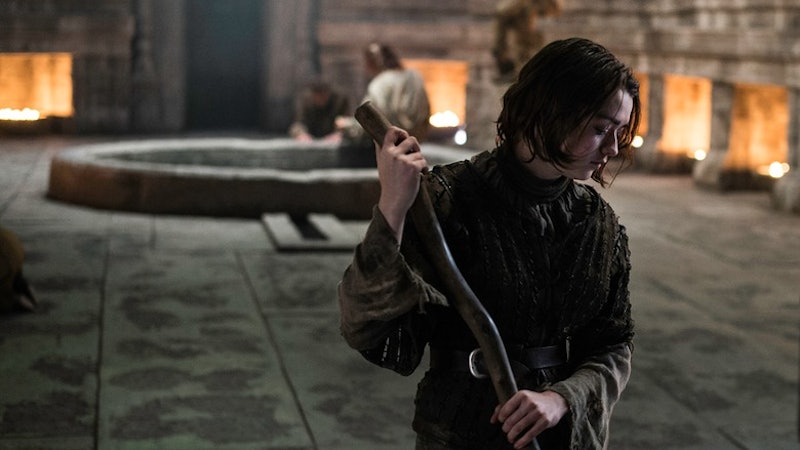 Game of Thrones writers have done a pretty damn good job of making about 99 percent of the characters that appear on the show either "meh" at best or detestable at worst. The other one percent I'm referring to is made up pretty much entirely of Arya Stark, the youngest daughter of the murdered Ned Stark and the bravest, smartest, strongest willed girl this side of Westeros, and perhaps in the entire known world. While her older sister Sansa has inarguably gone through just as much as Arya, if not more (especially after last week's brutal episode), Arya has somehow managed to do more than survive — she's taking control of her own destiny and attempting to thrive. Not particularly easy to do in the Game of Thrones universe.

Of course, Arya's current plot line revolves around little more than her polishing dead bodies, presumably part of the initiation period towards becoming one of the Faceless Men at the House of Black and White. Taken under Jaqen H'ghar's wing, she is attempting to become "no one". But the problem is, Arya has never been no one. She is herself, and she's fierce, and that has to mean something in the grand scheme of things.

While she has no royal blood and therefore no rightful claim to the throne — not to mention the fact that she currently finds herself across the narrow seas in Essos — there's nothing I'd love to see more on this show than Arya on the Iron Throne when all is said and done. Clearly the current system of primogeniture isn't working, nor is the ongoing war between families who swear they've got claim to the kingship, so let's switch it up a bit and put Arya there. She'd make a great leader, you have to admit.

She's not afraid to stand up for what's right

Regardless of who's in power, Arya is not keen to just let them decide what's right and wrong. When someone does something she doesn't agree with, she speaks up about it, and attempts to make the situation better in any way she can. Mind you, she's had to be careful about it thus far, but it's a great quality for a leader to have.

She will never run away from a fight

Arya isn't cruel, but she's also not a coward. She certainly wouldn't leave her soldiers on the battlefield to run back to her parents (even if they were alive). If someone wants a fight, they'll get one from Arya.

She does what's necessary to survive

After her father was beheaded, Arya was forced to go on the run from King's Landing in order to stay alive. She then posed as a boy, traveled the length of Westeros with The Hound, and eventually made off on a merchant ship to Braavos. Not many people would have had the tenacity, especially not someone her age, but here we are.

The fact that she's even wanting to become one of the Faceless Men shows her keenness to learn, to become something different, and something more than she already is. Can you think of any better skill to have?

She is loyal and fair

When Arya develops a bond, she doesn't soon forget it. Of course, most of the people she's bonded with thus far have been killed, but no matter. As Queen, Arya would remain true to those who served her honestly.

She's not bogged down by convention

Arya is smart and perceptive, meaning she'd likely find solutions to problems other leaders would never consider. Has a young girl ever sat upon the Iron Throne? Maybe, but not as far as we know. Arya could be the first, and she'd be so good at it.

It would change everything

Wouldn't it, though? Now that's a show I'd be dying to watch every week.