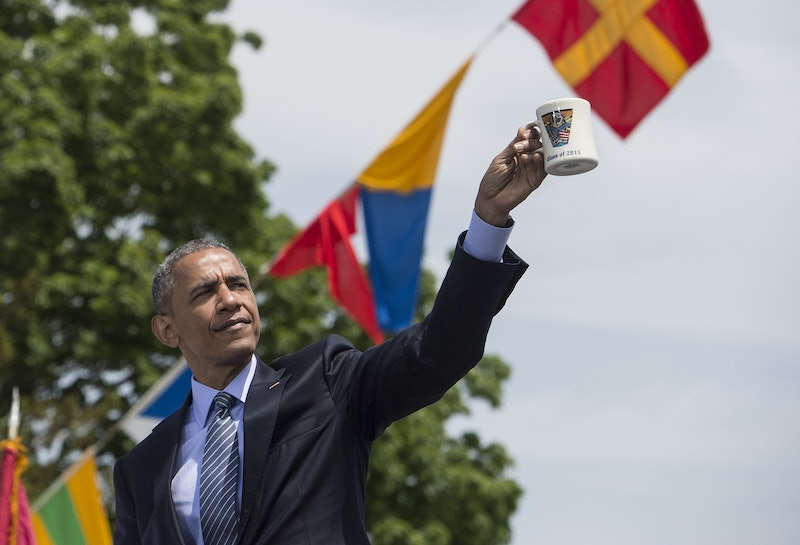 President Obama noted this week that climate change is not just an environmental issue, but a threat to national security and a factor in the political unrest seen in Nigeria and Syria. The President’s new message — delivered at a commencement address to cadets at the U.S. Coast Guard Academy in Connecticut — echoes a growing opinion that that climate change is at the root of global conflict and terrorism. President Obama has been trying for several months to cast a wider net to win support for his environmental agenda, including framing global warming as a public health issue. But this new way of thinking could allow him to reach a small number of moderate Republicans who are both concerned about political conflict and coming around to the idea that climate change is real.

The Department of Defense previewed this major shift in thinking last December with a report laying out the department’s plan for adapting to climate change. According to that plan, rising temperatures and more extreme climates would influence the military's response to everything from disease eradication to terrorism.

A changing climate will have real impacts on our military and the way it executes its missions. The military could be called upon more often to support civil authorities, and provide humanitarian assistance and disaster relief in the face of more frequent and more intense natural disasters. Our coastal installations are vulnerable to rising sea levels and increased flooding, while droughts, wildfires, and more extreme temperatures could threaten many of our training activities. Our supply chains could be impacted, and we will need to ensure our critical equipment works under more extreme weather conditions. Weather has always affected military operations, and as the climate changes, the way we execute operations may be altered or constrained.

Wednesday's speech and companion report from the White House doubles down on that message and draws a roadmap of how climate change can cause political unrest.

Here are the biggest takeaways from the White House report:

1) Extreme heat, flooding, and drought will lead to higher food costs and food shortages. Areas where water and food are scarce are more likely to see political instability and unrest. The report also predicts more civil conflict as people migrate to neighboring regions to escape political upheaval and disease.

2) It will be tougher for military leaders to find navigable routes to move military resources to address conflicts or deliver aid. Military leaders will have to consider rising costs of electricity, water, food, and fuel when managing military installations abroad. And more civil unrest in developing countries will mean more nations looking to the U.S. for military support.

3) Higher temperatures will cause a net increase in demands for electricity worldwide and put a strain on electricity production. According to the report, more demand will mean higher prices in wealthier countries and more outages in the poorest countries. Military leaders will have to factor in those demands in decisions about troop movement and support.

According to the White House, scarcity in the basic availability of food, water, and safe shelter creates an environment that allows extremist political groups and terrorist organizations to amass power.

Understand, climate change did not cause the conflicts we see around the world. Yet what we also know is that severe drought helped to create the instability in Nigeria that was exploited by the terrorist group Boko Haram. It’s now believed that drought and crop failures and high food prices helped fuel the early unrest in Syria, which descended into civil war in the heart of the Middle East. So, increasingly, our military and our combatant commands, our services -- including the Coast Guard -- will need to factor climate change into plans and operations, because you need to be ready.

The President's statements are backed up by recent findings from the first in-depth study of the events that led to civil war in Syria. In an interview with Mashable, study author and University of California at Santa Barbara researcher Colin Kelley said that a three-year drought that forced 1.5 million farmers and herders to travel to other areas in search of food and work helped to fuel the conflict that led to civil war.

A lot of these farming communities abandoned their villages and went to the cities at the same time that Iraqi refugees were coming in ... There was a very big population shock to these urban areas.

Indeed, given the immediacy of armed conflicts in Syria and elsewhere, the President’s remarks on global warming sparked immediate criticism from Republicans. Staunch climate change denier Sen. Jim Inhofe quickly issued a statement saying that the speech was evidence of a “severe disconnect from reality.” But, in that same statement, he seemed to agree that global instability should be the President’s primary concern.

On the day he delivered the speech, the leading headline in the press was North Korea’s announcement that it now has the ability to miniaturize nuclear weapons and place it on the tip of a ballistic missile. This comes at a time when the Obama Administration is negotiating a bad deal with Iran, which many - including myself - have expressed concern could lead to a global nuclear arms race. […] When I talk to military personnel, whether in Oklahoma or overseas, their greatest concern is not climate change. Instead, what I hear is their concern for global instability, the disarming of America and the lack of vision from their commander-in-chief.

If Republicans are determined to deny publicly that climate change exists, connecting it to issues of security and terrorism could be a way for President Obama to make quiet gains among conservative lawmakers who think climate change is real. That list is admittedly short— just 3 percent of 278 members of the House and Senate, according to Politifact — but some have argued that with the right political cover, other Republicans could make their common-sense views on climate change more public.

By invoking the dangers of resource scarcity as fuel for political extremists, the President may have finally hit upon a way for that small group of conservatives to talk to their colleagues about climate change— even if they can’t actually use the term.

More like this
Joe Lycett Just Took HIs David Beckham Qatar Protest To A Whole New Level
By Sophie McEvoy
Footballer Jake Daniels Shared His Thoughts On A World Cup Boycott
By Sam Ramsden
Iran Has Issued A Death Sentence Over Mahsa Amini Protests
By Catharina Cheung, Darshita Goyal and Maxine Harrison
Bustle Daily Newsletter: November 24, 2022
By Hayley Schueneman
Get Even More From Bustle — Sign Up For The Newsletter