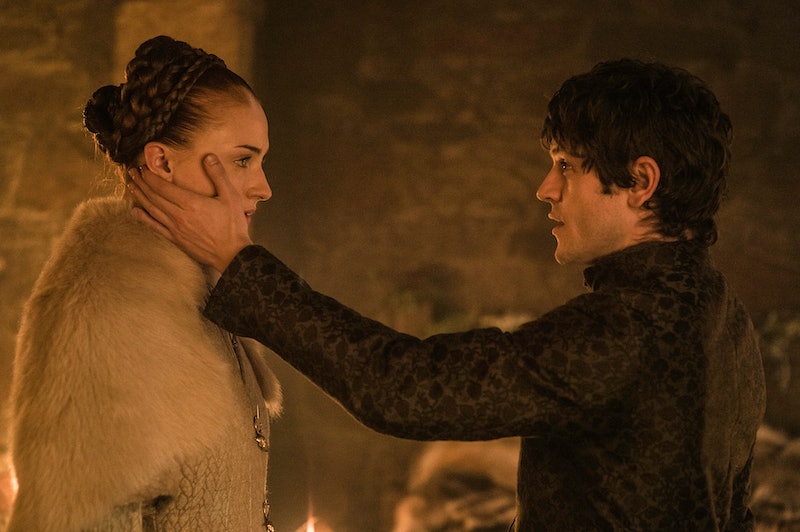 By now we all know that Sansa Stark's storyline was drastically changed for Season 5 of Game Of Thrones. While on the page, the character is still safely harbored in the Vale of Arryn under a false alias — Alayne, Littlefinger's own bastard daughter — on the show, she has ventured home to Winterfell to wed Ramsay, the psychopathic bastard of Bolton. If this particular change wasn't controversial before, it certainly is now: Last Sunday's episode ended with Sansa's wedding to Ramsay, after which Sansa was raped by her new husband, while Theon Greyjoy was forced to watch. Unlike other changes crafted by show runners David Benioff & D.B. Weiss (Jaime in Dorne, Barristan's death), this tragic plot isn't a wholesale invention. Rather, Sansa has co-opted the plot of another character entirely: Jeyne Poole. Right about now, non-book readers are likely wondering... Who is Jeyne Poole, and what happens to her in the books? (Spoilers ahead.)

In George R.R. Martin's A Song Of Ice And Fire, Jeyne is the daughter of Winterfell's steward, Vayon Poole, and Sansa's closest childhood friend. As the head of Eddard's household, Vayon and his daughter made the trek to King's Landing with the Stark entourage when Ned was made Hand of the King. Vayon was slain along with the rest of the Stark tribe during the Lannister coup, and young Jeyne was sent to work in one of Littlefinger's brothels.

When the Lannisters needed a token to help solidify the Boltons' hold on the North, they seized on the idea of using Jeyne as a pawn. They dressed the girl in the Stark colors of grey and white, passed her off as Arya, and betrothed her to Ramsay. She actually met Jaime and Brienne on her journey from King's Landing to Winterfell, and Jaime instantly saw through the ruse, noticing that the girl was much too old to be Arya. He had to inform Brienne of the deception so she wouldn't go running off after the fake Stark daughter.

Once in Winterfell, Jeyne's life became a living hell. (As though it hadn't been bad enough already.) Just like Sansa on the show, she wed the Bastard of Bolton. "Reek" gave her away at the ceremony, the idea being that since Theon and Arya knew each other as children, his presence would help legitimize the ruse. That night, Ramsay ordered Reek to stay in the room for the bedding... but unlike on the show, he forced his servant to take a more active role in the proceedings. Theon was commanded to strip Jeyne (noticing the whip lashes on her back as he did so) and then to perform oral sex on the terrified girl to "ready" her for her husband.

The horrors for poor Jeyne didn't end there. Ramsay kept her constantly confined to her tower, where she was heard weeping all day and all night. She suffered through so much that she didn't believe Theon when he told Jeyne he wanted to help her escape. (Mance Rayder, who's still alive in the books, had been dispatched from the Wall by Jon Snow and Melisandre to rescue the Lord Commander's "half-sister.") Her response to Theon's plan illuminated the depths of Ramsay's depravity:

Eventually, Theon and Jeyne did manage to escape Winterfell, although Mance was captured by Ramsay. A preview chapter from The Winds Of Winter describes their arrival at Stannis Baratheon's camp after trekking from the castle through a blizzard. (To add insult to devastating physical and psychological injury, Jeyne gets frostbite on her nose along the way and is told she'll have to lose it.) Theon urges Jeyne to keep up the "Arya" deception with Stannis' men, because otherwise she'll be "just a whore" to them. Stannis sends Jeyne to the Wall to be with her "brother," but he keeps Theon, planning to execute the man who "killed" the Stark boys as a morale booster for his army of Northmen.

Hopefully the parallels between the journeys of book-Jeyne and show-Sansa end at their marriage to Ramsay. After the outrage generated by last week's episode, it's almost impossible to imagine the firestorm that would ensue if viewers were subjected to the rest of the terror Ramsay wreaked on Jeyne. Fortunately, Sansa is a much savvier player of the game than Jeyne ever was. Jeyne only ever played a passive (even resistant, at times) role in her own rescue. Watching Sansa be an active agent of her own salvation will provide a much more satisfying conclusion to this tragic storyline... especially if she gets to inflict some serious damage on the Boltons along the way.