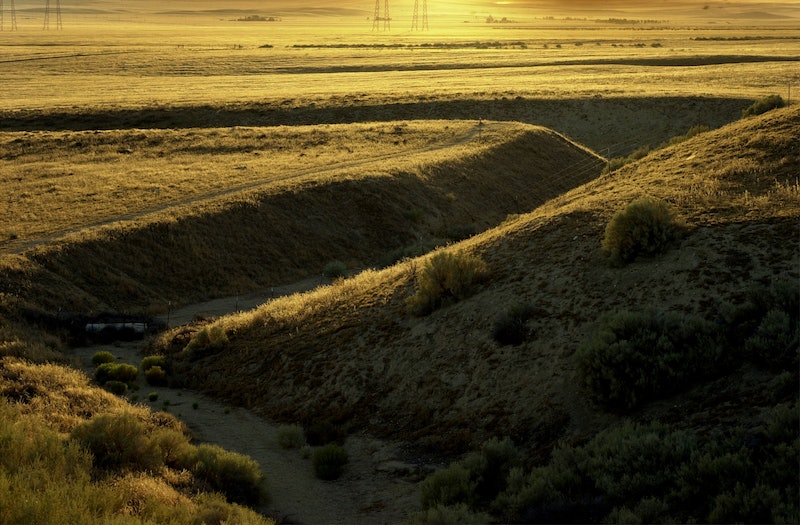 At this point, you've either seen the trailer for San Andreas (or at least heard of The Rock's film), but now you're probably wondering where exactly is the San Andreas fault. This is the big question, especially if you live in California (like me!) where earthquakes are aplenty. With all this talk about "The Big One," naturally you'll want to know whether your city is in its potentially destructive path.

Quick geology lesson: The Earth's crust is made up of tectonic plates that slowly move over its surface. Two of them meet in California, and that chasm is what we call the San Andreas fault. This is the same fault that caused the devastating 1906 San Francisco earthquake, a 7.8-magnitude beast that killed 3,000 people and destroyed nearly all of the city. There are a number of smaller faults throughout the state, but obviously the big one is going to be what causes "The Big One."

Let's get into specifics. According to the U.S. Geological Survey, the 800-mile long San Andreas fault extends down along the coast of northern California, with San Francisco, Silicon Valley, and San Jose all in close range. The fault then runs parallel to the west side of the 5 freeway. Once the fault hits Los Angeles County, it cuts slightly east to go right through San Bernardino and end around Cajon Pass, where the 15 freeway leaves Southern California.

So I hate to break it to you, but no matter where in California you live, you're going to feel the massive earthquake. That's because the San Andreas fault pretty much runs along the entire west side of California — which is actually where most of the state's population lives. Even if you aren't living directly near the fault, an earthquake with a magnitude 7 or higher can be felt hundreds of miles away.

But fellow Californians, don't freak out just yet. The best way to practice earthquake safety is being prepared, so make sure you're educated on what to do when "The Big One" actually comes. Make note of the heavy appliances and objects in your house, and secure them to the walls and ceiling. Stock up on essentials — bottled water, food, batteries — and figure out your exit route for safety. We all know the fault is down there, but we can always be ready for what happens above ground when an earthquake hits.

More like this
Why Experts Say Sleeping With A Fan On Isn’t Totally Risk-Free
By Sophie McEvoy
The 6 Best UV Umbrellas, According To A Dermatologist
By Rachael Green
The 8 Best Indoor Door Mats For Your Home
By Jenny White
Diesel’s 1DR Bag Is Peak Y2K
By Dominique Norman
Get Even More From Bustle — Sign Up For The Newsletter