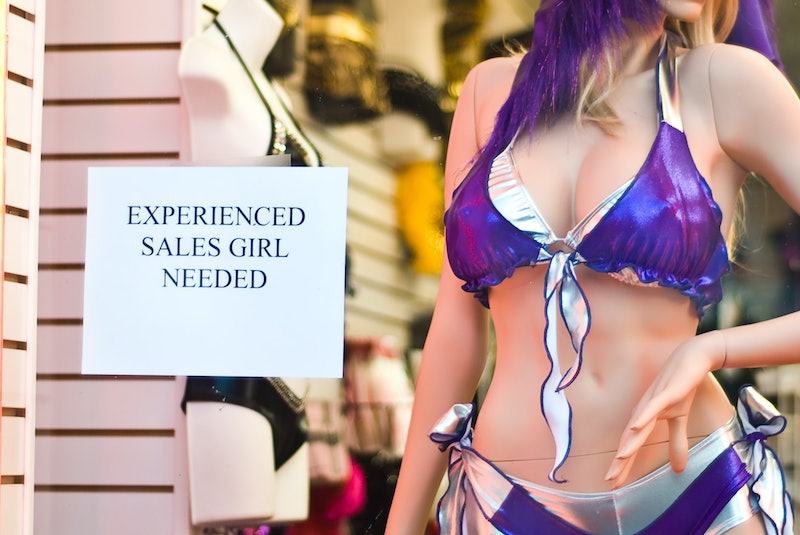 In the United States, no one would accuse store mannequins of promoting a healthy body image. Almost all of them are impossibly skinny and sometimes manufacturers add things like protruding spine bones — just for fun! Until today, in fact, I didn't realize we had much to be thankful for when it came to how American stores display clothes. Then I saw photos of mannequins in Venezuela and whoa. In addition to teeny-tiny waists and limbs, Venezuelan mannequins come with breasts the size of industrially-grown watermelons. In short: They look like a pre-breast-reduction Heidi Montag. You look at them and wonder how they're not toppling over.

In a country where plastic surgery (and breast enlargement in particular) is disturbingly common, it seems especially appalling that standard mannequins would be built this way. But in a New York Times article this week, mannequin manufacturer Eliezer Álvarez said he only created these oh-so-enhanced models to reflect the reality of Venezuelan women. Before making the adjustments his sales were slow, but "now his mannequins, and others like them, have become the standard in stores across Venezuela, serving as an exaggerated, sometimes polarizing, vision of the female form" in both fast fashion stores and fancy boutiques alike.

In England, department store Debenhams just rolled out a line of plus-size mannequins in order to more accurately reflect the bodies of many of its customers. So what's wrong with Venezuelan shops doing the same for its surgery-saturated clientele? Some say nothing — the mannequins are just 'art imitating life.' But unlike other adjustments, the boob jobs given to Venezuela's mannequins promote a version of life that can only be achieved through artificial means (and about $6,000) for the vast, vast majority of women. Life, in this case, is perhaps something that shouldn't be imitated.

More like this
Meghan Markle’s Favourite Skincare Brand Has Finally Landed In The UK
By Tomi Otekunrin
How To Master Baby Braids, According To TikTok
By Tomi Otekunrin
What Is “Jello Skin”? The Latest Viral Trend To Know About
By Tomi Otekunrin
Reviewers Are Obsessed With These 45 Things That Look Good On Everyone & Are So Damn Cheap
By Carina Finn
Get Even More From Bustle — Sign Up For The Newsletter