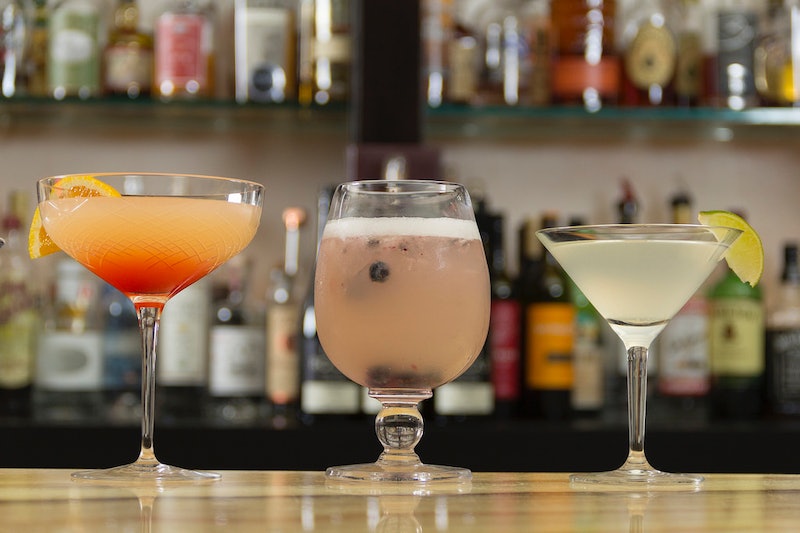 Do you love a good tipple? Then you're going to enjoy this one: Mode Glam just released a time-lapse video featuring bartender Adam Delany concocting "100 Years of Cocktails in Two Minutes" (one minute and 49 seconds, to be exact). The video starts off with a Manhattan in 1915 and continues all the way up to 2015, ironically with an Old Fashioned — and as it turns out, alcohol can be not only beautiful and delicious, but educational as well. Who would've known the Mai Tai was invented in the 1940s, or that a Bloody Mary could be served with a flower garnish?

Delany manages a San Francisco bar called Tradition, which considers itself "a classic American bar featuring menus that span the globe and the different eras of cocktails," so he knows a thing or two about booze throughout the decades. And now you can, too: The suggestions in this video will help you create a drink menu for any period-specific party — or, if you're very ambitious, perhaps a 20th-century party with several of the cocktails served all at once.

Since either the drink-making portions of the video are drastically sped up or Delany has broken a world record for bartending speed, I'll slow it down and tell you what exactly is in these concoctions and where they come from. Scroll down to watch the full video.

This concoction is not for drinkers who need their hard liquor drowned out with juice, soda, or other ingredients in "girly" (don't you just hate that word?) drinks. Made of whiskey, sweet vermouth, and bitters, the New York cocktail was a staple in Speakeasies during prohibition, when bars used Canadian whiskey due to a shortage of American ingredients. Though the Manhattan has several conflicting origin stories, its earliest known mention was in the 1891 guide The Flowing Bowl — What And When To Drink.

Though most contain sugar, Angostura bitters, champagne, and brandy, there are many variations under the umbrella of "champagne cocktail." You can also get creative with the garnishes, which sometimes include cherries, oranges, and lemon peels (which Delany appears to use here).

Perhaps as an artistic choice to illustrate the passage of time, splashes of color emerge at this point in the video. The classic Bloody Mary shown here includes tomato juice and vodka, but anyone immersed in the current trend of getting totally carried away with boozy brunches knows that "the world's most complex cocktail" can also include hot sauce, spices, and even vegetables and seafood. Some establishments have outdone themselves by creating make-your-own Bloody Mary bars for customers to overflow tall glasses with their ingredients of choice.

Per Wikipedia's warning, Mai Tai the drink is not to be confused with Mai Tai the music group, "Mai Tai Anoaʻi" the pro wrestler, or Muay Thai the martial art. When referring to the alcoholic beverage, the Mai Tai comes from "Maita'i," the Tahitian word for good, and includes rum, Curaçao liqueur, lime juice, and sometimes orange or pineapple juice. You also may have heard of the crowd-pleaser in this context: The "attack" referred to in the meme "I Came Out to Have a Good Time and I'm Honestly Feeling So Attacked Right Now" was originally "isn't that just pineapple and orange juice" in response to "I'm having a virgin Mai Tai." Well, now you know there was likely at least some lime juice in there as well.

Godiva chocolate martinis, blood orange martinis, s'mores martinis... the possibilities are endless. But the original recipe is just gin and vermouth, usually garnished with an olive and/or lemon twist (and olive brine or juice if it's a dirty martini) — ingredients mysteriously absent in many subsequent varieties, which, as far as I can tell, have simply attained martini status by virtue of being served in martini glasses.

Contrary to the name, this drink tends to be sweet, containing (not contrary to the name) whiskey, lemon juice, and sugar, yielding the taste of a lemon drop. Though chosen for this video's 1960 cocktail, the whiskey sour's earliest mention came almost a decade earlier in an 1870 issue of a Wisconsin newspaper.

Well, there's an interesting name. This one actually did rise to fame during its assigned decade in the video. Its signature ingredient, Galliano, migrated to California from Italy along with the Italian travelers who carried it to remind them of home during the Gold Rush. Rumor has it the Harvey Wallbanger's name (not sure what the "H" is doing in the video) stems from a surfer named Harvey in Manhattan Beach, California, who drank so much Galliano one night he banged his head against the wall. From there, stories diverge, but either way, vodka and orange juice somehow joined the Galliano to create the popular 70s cocktail.

It wasn't until he came on with his floral '80s shirt that I realized Delany had been changing clothes in keeping with the decades throughout the video. In his bright blue button-down, he introduces the B-52, named after the '80s band The B-52's, a name that in turn references a bomber used in the Vietnam war (who knew alcohol had so much history?). The drink contains coffee liqueur, Irish cream, and orange liqueur, which separate into three beautiful layers. In the video, Delany makes a flaming B-52 by lighting the top layer on fire.

Not to be confused with a Long Island iced tea, the Long Island contains tequila, gin, whiskey, white rum, vodka, sugar syrup, Coca-Cola, and orange juice. I suppose this plethora of ingredients is fitting for the excess that characterizes Long Island, the setting of The Great Gatsby.

Many of us were watching Carrie, Samantha, Miranda, and Charlotte sip these in various New York City bars in the late '90s-early 2000s TV series Sex and the City. Since then, the Cosmopolitan, which consists of vodka, triple sec, cranberry juice, and lime juice, has become a symbol of urban sophistication.

Time to hop off the cocktail time machine and enter into the present. This drink deserves its name, dating back to George J. Kappeler's 1895 book Modern American Drinks . Requiring a bit more culinary skill than the others, the Old Fashioned features sugar muddled with bitters and a hard liquor of choice, usually whiskey or brandy. And it comes in its own kind of glass called, appropriately, an old fashioned glass.

A suggestion for Mode Glam's next project: I can see a "100 Years of Cocktails" song to the tune of "The Twelve Days of Christmas," beginning, "On the first decade of the century, my bartender made for me..." You. Are. Welcome.

More like this
I Tried The $20 TikTok Viral Oishii Strawberries — Here's What I Thought
By Sophie Hanson
Trust Me, Pickle Martinis Are The New It Drink Of The Season
By Emma Carey
On TikTok, A ‘Snackle Box’ Is The Best Way To Pack Charcuterie On-The-Go
By Meguire Hennes
The 4 Best Blenders For Acai Bowls
By Ileana Morales Valentine
Get Even More From Bustle — Sign Up For The Newsletter