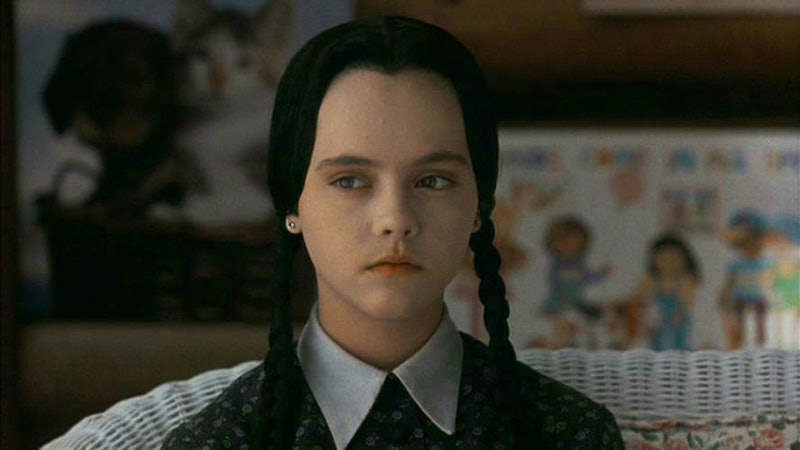 My favorite holiday isn't Christmas or New Years or even — the obvious guess — Halloween. It's the day of my people, World Goth Day, and, despite kicking off my striped tights six years ago, it's something I celebrate hard every year. Though I have a date with absinthe, black lipstick, and my Siouxsie and the Banshees vinyl, you're probably going to be a little more lax when it comes to honoring this splendiferous event. Well, how about we revisit the unlucky 13 most iconic goth characters that have both influenced, defined, parodied and broke ground for our little subculture?

...OK, not LITERALLY 13, becomes a lot of them come in dark little clusters, just like in real life. It probably clocks in under 20. Regardless, pop culture has gifted us with these incredible dark darlings. Some of them remain extremely obvious — raise your hand if you're wondering how long it takes me to get to Wednesday Addams — but nonetheless important. All of them have something to contribute to the fading dialogue of what constitutes gothdom, a dialogue that matters to no one but Gaby Moss and me.

Whatever. Listen up, children of the night. Here's the ultimate line-up of some of the most important goths from television, film, and the occasional book.

Allison Reynolds from The Breakfast Club

It's not that Allison appears blatantly as a goth, but she thoroughly embodies the '80s outsider, existing strongly as the "basket case" of the titular Breakfast Club. Or not. During the film's day-long detention, it's revealed that each one of the teens has a heavy load of baggage to carry. And that normalizes our token weird girl, even if she's the only one who will spruce up a sketch with her own dandruff.

Ultimately, Allison is great because she's the one of the first on-screen goth teens without really meaning to be. And, that said, we'll never truly forgive Claire for washing off her eyeliner.

Nancy Downs from The Craft

Some people will lump all of the coven as "goth girls," but, no, that's not how this works. With her oxblood lipstick and stark charcoal hair, Nancy epitomizes the look in its peak '90s variant. My biggest reservations about the upcoming Craft remake is that they'll water down her character, have her dwell in a softcore subculture. As it is, every picture of this photo on Tumblr urges young witches to follow for more pastel grunge.

Ellie Nash from Degrassi: The Next Generation

Forgive me if I didn't follow Degrassi deep into its later chapters... I more or less jumped ship once Drake became Wheelchair Jimmy. But Ellie was a fascinating character when she showed up in Season 2, because she dealt with real issues and situations that kids in the goth subculture ran into. Some of it was serious (cutting), and some less serious (dating a gay guy is a rite of passage we all go through, right?)

Moreover, Ellie's friendship with babygoth Ashley (that was a cute five episodes) was SO reminiscent of our relationships with the first alt girl we try to emulate. It's especially clear in that episode where Ashley tries to prove she's bad with a bellybutton piercing. Basically, you either were the Ellie in 9th grade, or you got your goth on BECAUSE of an Ellie.

Eric Draven from The Crow

The Crow — that is, the 1994 cult film — has a murky reputation in the goth community. After its screening, it was all too common for the Eric Draven look to pervade goth clubs, and that, like listening to a ton of Marilyn Manson, was a clear sign that you were new to the scene.

But Eric Draven himself, and the tragedy that befalls him, is pure goth poetry. And, in James O'Barr's original comic, Eric has the physicality of Iggy Pop, the hair of a subdued Robert Smith, and the soul of Joy Division's Ian Curtis. Oh, and he's based on Peter Murphy of Bauhaus, so, overall, the ultimate goth amalgam.

The significance of Abby? She shows that not all goth kids are kids, children simply scrambling around in their awkward phase. They can grow up to be badass forensic scientists with an abundance of perk... and that must be good news for mom and dad.

Though the two are pure parody, they're also spot on parody. The essence of being a goth teen is trying to paint yourself the Prince of Sorrows when you really work the register at Cinnabon.

Basically all of the Addams Family, but ESPECIALLY Wednesday

The Addams family are the originals, so I won't waste time elaborating, but Christina Ricci's take on Wednesday is TOTAL gloom inspiration. And don't forget that fabulous badass feminist Morticia.

Not the most mainstream pick, but it's a goth listicle, so why would it be? Stevie Nicks-obsessed Gypsy and gay BFF Clive are delightful, sharp-tongued and flamboyant. Incidentally, this is also the story of me, my friend Kyle, and the summer of 2005... hooking up with the Amish and what-not.

They are everything. God bless Trey Parker and Matt Stone for creating these characters. Originally conceived as a one-off joke, they've developed into little heroes, crusaders who recognize the (sometimes laughable) nuances between us and (shudder) the Emo kids.

For the record, "Henrietta" is the fake name I give out to creeps at IHOP.

Everything about Sam panders to the Fairly Odd Parents Deviantart community that was making uncharacteristically morbid fairies... not that I would know anything about that. Still, where else can you find a prominent goth character identify as a goth in a children's cartoon?

Not your average goth cliche, but our girl NAILS down the revenge fantasy we all harbor.

The one and only queen of the underworld, played with a melancholy only Winona Ryder can exude. She is everything we think of when we think of goth, from black lace veils to melodramatic platitudes.

Oh, and pretty much every character Jhonen Vasquez has created