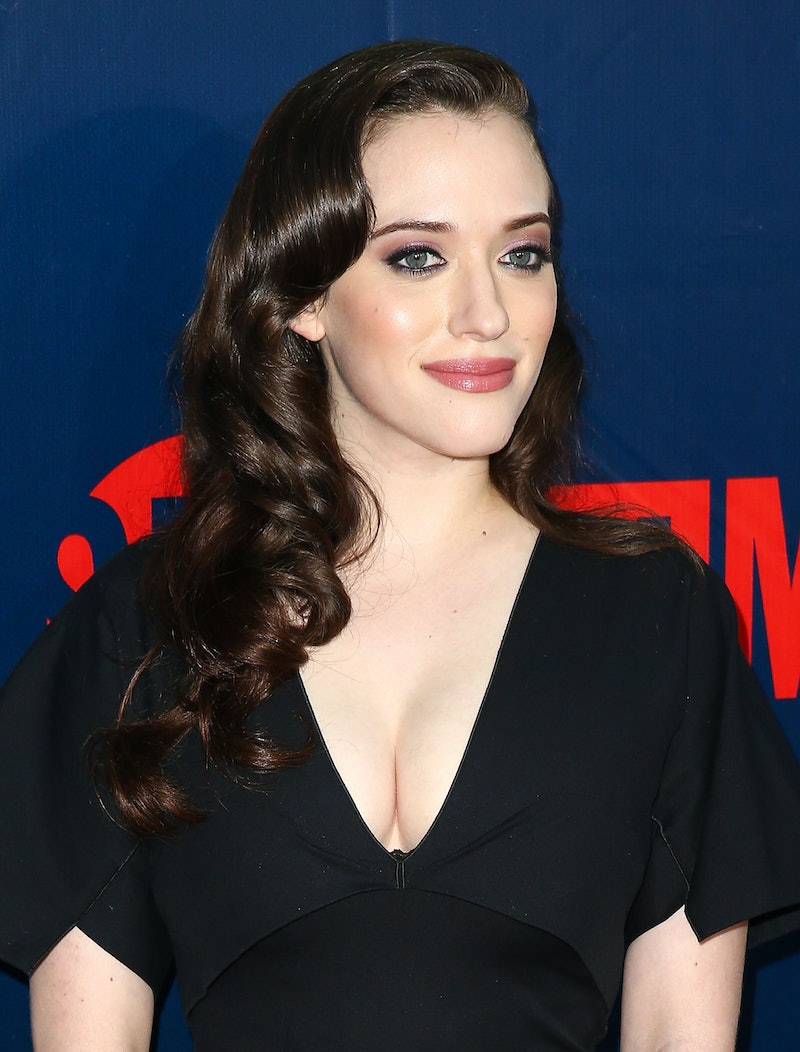 When sassy bombshell Kat Dennings told Conan O'Brien she used to be a goth kid, I was delighted. "I was kind of obsessed with the Addams Family, and I went through a phase where I thought I was Wednesday Addams," she said. That's so great, so did all of us! I was so ready to pull her to a night of dancing at QXT with Shailene Woodley when I had to pump the breaks.

When we see an image of little goth Dennings, she's five, and it's Halloween. That's... very much not the same as when I say I used to be a goth kid. Cut to me at 14, striped tights, black lipstick, ankh around my neck, reading Johnny the Homicidal Maniac at a pool party. The decision I made as a tween wasn't a throwaway joke, it wasn't a cute thing I did when I was little, it was a lifestyle choice.

Granted, I am NOT a celebrity. I still get excited every time I get a new Twitter follower. But I, from time to time, declare myself as both a former and current goth kid. And I don't know how cute that is considering the fact that I wear pink cocktail dresses and yoga pants, and make fun of goth kids on the regular (though the latter is more about my position of a satirist). Actually, to be honest, part of me threw in the goth kid line in my bio kind of as, well, a throwaway joke.

We live in a postmodern era where cultures and subcultures are seamlessly blended and adopted purely for aesthetics, and "goth" has by no means been left out of that. This is a flavor you could taste in the mainstream for a while now, but it hasn't stopped feeling weird to me. Look at every other MAC Cosmetics line in the past two years. Check out the "pastel goth" tags on Pinterest and Tumblr. Check any listicle that suggests and/or endorses celebrities "going goth."

The latter, of course, I find to be most offensive. It's very frustrating to see someone in a place of mainstream power get applause for putting on the same mulberry lipstick I got beat up for. Most celebrities have no concept of what it's like to dress like that in the hallways of your school, as a hopeful beacon to like-minded people, only to have ass-hat jocks ask if you if you're a Satanist. Even these days, my mom told me about one of her students, a goth and the best writer in her class, being in hysterics and asking to go to the nurse's office because she was "so miserable." And I started crying so hard because I got it.

Then you'll have someone like Katy Perry, who spent her youth recording gospel records, who I'm fairly certain does not "get it." I mean, she announces she's going to deliver a much "darker" album, releases music that are void of darkness, and throws on some purple hair and a black dress to top every celebrities-doing-goth list ever. I guess it shouldn't be baffling since inappropriate culture appropriation is her bag, but seeing her get brownie points for that still makes me feel weird.

What makes me feel even weirder, though, is when celebrities claim they used to be a goth kid. First of all, the listicles for THAT are even more mangled, including anyone who was ska, punk, or had a short haircut. NOT THE SAME THING. Then there's the part of me that loves it, because I'm a big fan of the goth kid success story.

Christina Hendricks, who's just as wonderful and voluptuous as Dennings, is actually the textbook example of a goth kid success story. In 2012, Hendricks told Mirror: “I was a goth kid. I dyed my hair about 42 different colours, shaved it at the back and wore black make-up. Kids can be pretty judgmental about people who are different. She also recounted feeling “ugly, awkward and horrible,” and wished she could have counseled her younger self:

If I could go back and tell my 14-year-old self anything it would be, "Don’t worry. You’re going to be doing exactly what you want to be doing and those people who are assholes now are still going to be assholes in 20 years. So let it go!”

Now where do I fall into this, on the spectrum of things?

And within that insecurity breeds a humbleness that pushes me to strive for excellence. There are so many days when I wake up thinking, "I'm smart, talented, and have the best boobs in town, nobody can stop me now." And there are other days where I still get that creeping anxiety of, "I feel so weird in my own skin, I'm not pretty, nobody likes me, I don't fit in anywhere." It's what keeps me on my toes, and forces me to be creative beyond the limits of modern journalism. Simply that adolescent feeling of, "I can't let the football players win."

There's this great moment in The Craft, where the bus driver tells the gang, "You girls watch out for those weirdos," and Nancy spins around and says, "We are the weirdos, mister." For those who have genuinely gone through it, being a goth is not easy or glamorous thing, and a burden you always live with, but we're in this together. We are the weirdos, mister. And when the time comes, you'll see just how powerful we really are.