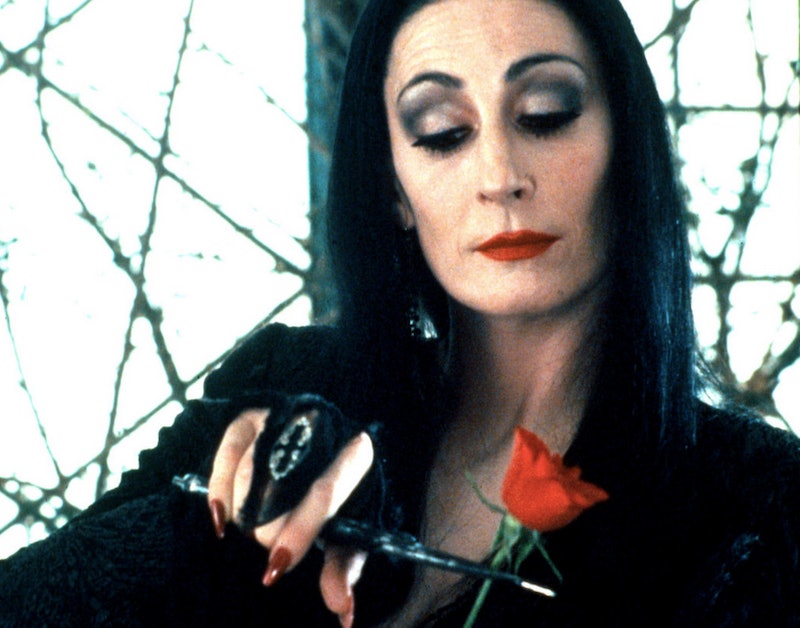 Halloween tends to inspire me to revisit my favorite gang of lovable monsters: The Addams Family (snap, snap). And that shouldn't come as a surprise. For decades, they've been an iconic bunch of creepy/kooky/mysterious/etc. and overall awesome folk. In fact, children of the '90s tend to worship Wednesday and her deadpan wit. But she's merely the princess of the Addams clan. It's the fully-actualized matriarch, Morticia, who reigns as queen.

To begin with, Morticia is drop-dead gorgeous. With that long black hair, the blood-red talons, and those ghoulishly captivating eyes, Morticia has a timeless look -- one that's since been co-opted by the likes of Vampira, Elvira, and, to a lesser extent, Lily Munster. She is the Chanel of girl ghouls: timeless and classic. That's not why I love her, though. Instead, it's her impenetrable spirit, her social graces, her sultry charm, her smooth intellect, and her progressive values that make her a role model.

Morticia and the clan have had many incarnations, beginning with Charles Addams' original illustrations in the New Yorker, starting in 1938. Other notable appearances have been in the black-and-white 1960s TV show (in which Tish is played by the doll-like Carolyn Jones), an animated series (a Saturday morning must-watch), and at least one baller pinball game. But when I think of Morticia Addams, I think of the statuesque Anjelica Huston in The Addams Family and Addams Family Values.

I recently rewatched the films, and it reminded me of how strong and forward-thinking she was. For proof, here are six Morticia quotes that solidify her status as the ultimate modern woman.

“Wednesday's great-aunt Calpurnia. She was burned as a witch in 1706. They said she danced naked in the town square and enslaved the minister … But don’t worry. We’ve told Wednesday: college first.”

Morticia knows the importance of a strong female role model, I mean, clearly, Aunt Calpurnia Addams was the Courtney Love of her time. Still, Morticia also realizes that Wednesday can't forego her education and pursue witchcraft all willy-nilly. You get your BFA in Spells and Hexes, Wednesday. Then we'll talk career options.

“And our credo: Sic gorgiamus allos subjectatos nunc. 'We gladly feast on those who would subdue us.' Not just pretty words.”

This is spoken to Uncle Fester when she suspects he's an impostor. Underneath her cool demeanor and macabre beauty, Morticia is a fighter who knows family comes first. She believes in loyalty and authenticity, and she is not above smiting anyone who tries to mess with that.

“Gomez, last night you were unhinged. You were like some desperate, howling demon. You frightened me. Do it again.”

Context is crucial here, so allow me to explain without sugarcoating: Gomez and Morticia basically have a consensual S&M relationship. That isn't something gently insinuated throughout the film; they actually use torture as foreplay. Now, why is that considered a plus?

Essentially, it shows that an older married couple can enjoy something outside of normative, vanilla sex, and it's presented in a way that seems respectful, and (here's that word again) consensual. Consider this: The BDSM community has been slandered by Fifty Shades of Grey, which showcases an abusive, controlling relationship that's actually separate from the pain in the bedroom. Way problematic. By contrast, at no point has anyone ever doubted the intense, passionate love between Gomez and Morticia. They bring kink back to a good place. So when Morticia says she'll get the ball and chain, I don't feel any legitimate reason to be concerned.

“Flora, Fauna, how can I compete? You're twice the woman I am.”

At one point, Morticia has to confront Gomez's two-faced ex-lovers Flora and Fauna, who playfully jab her about how she stole Gomez from them. Morticia, naturally, has her poker face on, because she is above all that petty stuff, and then sends a smooth compliment back at them. Well, a compliment or a literal observation, since they have a Bette-and-Dot situation going on there. My point is that Morticia works her hardest to be an ally to women, rather than an enemy. And above all, she's a fantastic hostess.

“You have gone too far. You have married Fester, you have destroyed his spirit, you have taken him from us. All that I could forgive. But Debbie... pastels?”

Morticia reserves a lot of judgement for the faults of other women, including psychopath Debbie Jellinksy-Addams. In fact, she can objectively recognize the positive qualities in someone she's at odds with, which is a genuinely rare thing. Women have the habit of mud-slinging each other senselessly. But Morticia, as we established, is not about girl-on-girl hate, and works to understand women different from herself.

That is, to a point. You cross a line, and she can throw shade better than anyone.

“I'm just like any modern woman trying to have it all. Loving husband, a family. It's just... I wish I had more time to seek out the dark forces and join their hellish crusade.”

Though she's perfectly satisfied with her life, when you get married, your priorities change, and it's hard to be as ambitious. Immediately after this, Gomez says, "You can! You shall! And so it must be!" because he is a wonderfully supportive husband, and the pair start hiring nannies so Morticia can return to her passions.

Liz Lemon be damned; Morticia Addams is, indeed, having it all.