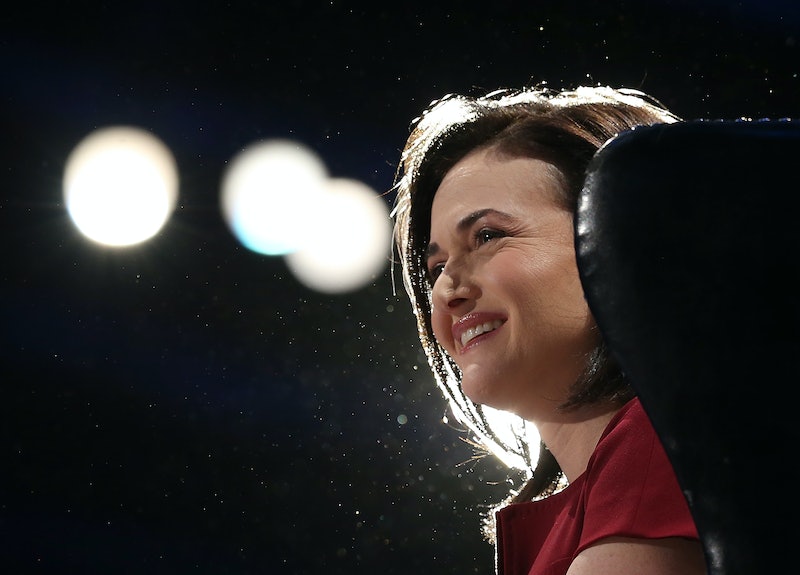 Ah, the all-time favorite tactic for dismissing feminist arguments: science! Where to even begin? Let's start with advice columnist Amy Alkon's claim about "leaning in." According to Alkon's reent piece in The New York Observer, no, we should not "lean in" because... because science. Or, specifically, because "the 'You go, career girl!' advice Ms. Sandberg does give is unrealistic and may even backfire on women who take it." You hear that, ladies? Watch out, because if you make the bold, unladylike decision of advancing in your careers, it could backfire!

[Evolution] leads to some 'very confusing' (and often ugly) relationships, with women as covert competitors, using tools including gossip and social exclusion to push down other women, especially any who dare to stand out. Men, on the other hand, are direct and domineering with one another from boyhood on in a way that women are not. Men come together in groups, while women form dyads — groups of two. Men love competition and contests to see who’s best, whereas women get insulted if one woman seems to be asserting herself as better than the others.

I have read many valid critiques of Sheryl Sandberg. I am not convinced by this one, though. As Jesse Singal points out in New York Magazine, Alkon's argument ignores the fact that culture has a huge influence on behavior — after all, people in different cultures exhibit drastically different behaviors despite having genes that are 99.9 percent the same. Singal exchanged emails with Bridgewater University psychologist Hunter Honeycutt, who expressed concern about Alkon's arguments:

Alkon supports her argument with quotes and research from Joyce Benenson, a psychologist at Emmanuel College, who told her, “No study has ever shown that the environment causes sex differences." While I don't doubt Benenson's qualifications, this particular claim is patently false; moreover, one individual's perspective certainly does not represent the majority of the academic community.

To name one prominent opinion to the contrary, Adam Grant, a well-respected psychologist at the University of Pennsylvania's Wharton School, threw his support behind Sandberg by teaming up with her to write a series for The New York Times on gender discrimination at work. In a piece on his motivations for becoming a gender equality advocate, he writes that "on virtually every attribute ever studied, men and women are remarkably similar — including intelligence, math and verbal abilities," but "even though there are more similarities than differences between the sexes, that doesn’t mean the world is fair to women."

As Honeycutt observed, the use of science to justify the status quo with regard to gender, race, sexuality, class, and virtually every hierarchical system is an old story. In retrospect, most of us look back at certain chapters of this story — e.g., "women shouldn't vote because science" — as outdated fallacies. Hopefully, that's how we'll look back at the belief that women don't share men's leadership abilities, as well as these other stereotypes supported by faulty science.

None of these claims are true — and here's why they're false:

1. Maybe there are fewer women in science for biological reasons.

Former Harvard President Larry Summers famously claimed in a speech at the university that "issues of intrinsic aptitude" may play a role in the gender disparity in the sciences, which led in part to his resignation. Again, this argument is old news; it was once applied to women in every field. And though it's generally less often used in the humanities (though there are certainly exceptions), beliefs that women have inferior spatial and mathematical reasoning persist. In fact, a recent study showed that people of both genders think women are worse at math, even when given evidence to the contrary. Yikes!

Actually, a wealth of research has shown that culture plays the primary, if not sole, role in gender gaps in STEM fields. One study found that gaps between boys and girls in mathematical standardized test scores was directly correlated with gender equality in the country where they lived.

You know what else causes fewer women to enter into STEM fields? People saying that women aren't as good at STEM fields. Another study showed that women are less likely to enter into a field when they're taught that mastering the subject matter requires inherent brilliance — because women don't believe they are brilliant.

Some have claimed Summers was just playing the devil's advocate, to which I'll respond with Mallory Ortberg's brilliant piece "Permission To Play Devil’s Advocate Denied," addressing those who think they're being super original with claims like "Maybe Men Score Better In Math For A Reason":

We would like to commend you for the excellent work you have done in the past year arguing for positions you have no real interest or stake in promoting... It is our hope that future holders of the devil’s advocate position will be able to carry on your legacy: smiling as they argue for positions they only half-believe themselves with people who are attempting to discuss something sincerely and in good faith.

2. If women and men would just "surrender to their nature," they'd stop having so many marital problems.

According to Fox News pundit Suzanne Venker, women rising in the workforce have incited a "war on men" that ruins relationships between men and women because "men want to love women, not compete with them. They want to provide for and protect their families – it’s in their DNA." The good news is, if women want men to stop feeling emasculated, "all they have to do is surrender to their nature – their femininity" and stop it with all this silly career business.

Yeah, OK. Venker makes a fuss about men being unjustly blamed for society's problems, yet she blames women for men's inability to deal with their success. And while she cites "men’s linear career goals" as a natural impediment to an equal division of labor in partnerships, I'm not sure what evidence would point to the biological nature of our career goals. She's probably vaguely referencing the notion that in early societies, men were the hunter-gatherers and women stayed back with the tribes to take care of the kids. But while whether women typically did the hunting is debated, they were at least doing the gathering. (And even if most didn't do the hunting, they should have been allowed to if they wanted to!) And research on remaining hunter-gatherer societies suggests that women in early human societies actually made decisions for their groups as often as men. Also, in case you haven't noticed, these cases are not exactly analogous. Gathering berries ≠ being the COO of Facebook.

3. Pop psychology is constantly claiming we are born to exhibit gender roles, when in reality no behavior is set in stone at birth.

The interaction of genes, brains, culture, and the slew of other steps in the chain of events determining human behavior is fascinatingly complex, and I highly recommend you read Sexing the Body by Anne Fausto-Sterling or Pink Brain, Blue Brain by Lise Eliot to learn more about it. In short, though, here's how it works. At conception, we have molecules of DNA in our cells which, as we develop and throughout our lives, get encoded into proteins, which in turn make up the cells in our brains and the rest of our bodies, which in turn execute decisions as we go about in the world. These transitions from genes to proteins, proteins to neurons, neurons to neural networks, and neural networks to behaviors are all susceptible to environmental influence. So, the environment is not an external force counteracting our "natural" instincts but rather a force in shaping "our nature," to use Venker's term.

Whew! That just got heavy. To give you a more concrete example of how behavior is context-dependent, Honeycutt shared a study with Singal showing that cats, thought to be natural rodent-killers, had no such inclination when they were raised alongside rats. Did this upbringing override the cats' natural instincts? Not exactly, because those instincts never developed. DNA molecules do not a proclivity make. So, does innate biology cause gender roles? Our genes don't "cause" anything on their own. And, even combined with other factors, they certainly don't cause women to fall behind in the workplace. But you know what does? Sexism. And that sexism is perpetuated every time someone says that women are not wired to lead companies or make scientific discoveries or enjoy an equal division of labor in their relationships. And without knowing it, people who make these claims are contributing to the very inequalities that they believe are natural.

More like this
Beyoncé & Madonna’s “Break My Soul” Remix Honors A Group Of Black Icons
By Stephanie Topacio Long
How To Use The Whatnot App To Thrift Vintage Items
By Emma Carey
The “Teenage Dirtbag” Trend Is TikTok's Latest Nostalgic Obsession
By Meguire Hennes
Your Daily Horoscope For August 17, 2022
By Alexandria Lettman
Get Even More From Bustle — Sign Up For The Newsletter