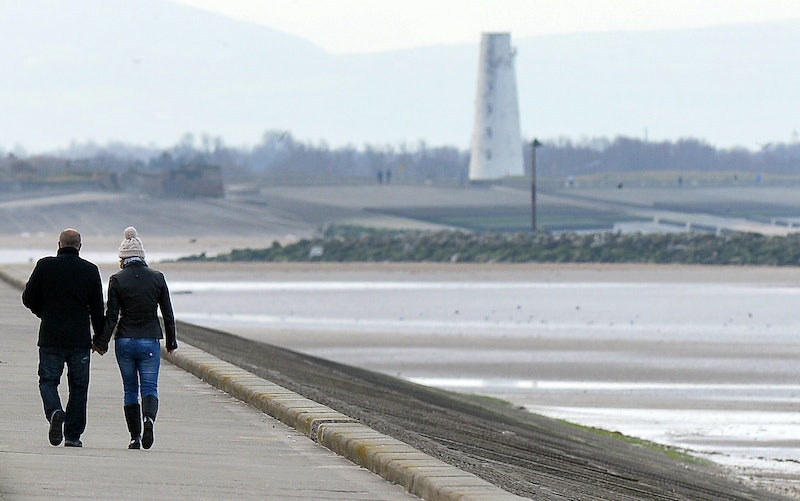 A woman in Atlanta snapped a picture of a man and woman walking together on the street. They're walking side by side, with the man on the left and the woman on the right, with the caption, "I'm sure half of you guys don't even know what's wrong with this picture. Smh". So, what's wrong with the picture? Is it that they aren't holding hands? No. It's that the man is walking on the wrong side of the street, and Emily Post wouldn't like it.

According to an excerpt Post wrote in 1922, a man should walk on the side closest to the street to protect the lady from general unpleasantness, lest a horse drawn carriage gallop by and get dirt of the lady's petticoats. In the chapter "On the Street and in Public" in Etiquette, Post writes:

A GENTLEMAN, whether walking with two ladies or one, takes the curb side of the pavement. He should never sandwich himself between them. A young man walking with a young woman should be careful that his manner in no way draws attention to her or to himself. Too devoted a manner is always conspicuous, and so is loud talking. Under no circumstances should he take her arm, or grasp her by or above the elbow, and shove her here and there, unless, of course, to save her from being run over!

The saga continues. Radio Station 91X - San Diego picked up the tweet and start asking men what they thought was "wrong" with the picture.

And while the men might not have guessed it, apparently Emily Post is still quite an influencer, because the photo on Twitter got more than 12,000 retweets. I'm telling you, if Emily Post were on Twitter, she'd have quite a following and would be verified as hell.I think it's great that the woman who posted the tweet has standards. It's 2015 and most of us are more concerned as to whether a guy is going to treat us well, not which side of the sidewalk he's walking on. But if you want to complain about what side of the street he's walking on, far be it from me to tell you my standards are better than yours. Though if you're going to stoke the fire of this debate, prepare to kiss a lot of frogs. And by frogs I mean perfectly good guys who haven't read Emily Post.

More like this
25 Things I've Reduced My Life To, In Addition To WFH In My PJs
By Ginny Hogan
Beyoncé & Madonna’s “Break My Soul” Remix Honors A Group Of Black Icons
By Stephanie Topacio Long
How To Use The Whatnot App To Thrift Vintage Items
By Emma Carey
The “Teenage Dirtbag” Trend Is TikTok's Latest Nostalgic Obsession
By Meguire Hennes
Get Even More From Bustle — Sign Up For The Newsletter