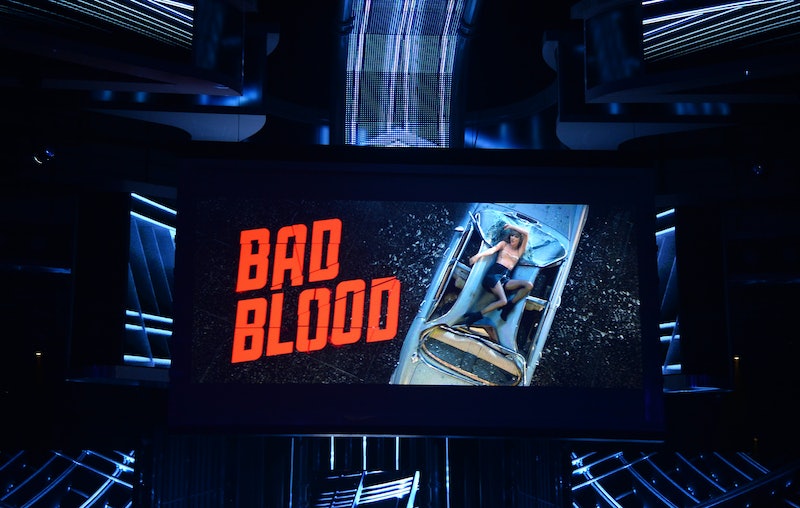 The world can finally rest easy now that Taylor Swift's "Bad Blood" video has, at long last, made its official debut, and now that we've all watched it a minimum of twenty times each, you may have noticed that the badass babes are all wearing some pretty stellar (and sexy) costumes. If you want to squeeze into some girl gang-approved latex of your own, you need look no further than your local adult product purveyor because according to the director of operations for The Stockshop, Shawn Gentry, Taylor Swift borrowed the "Bad Blood" costumes from a sex shop.

So, basically, every piece of latex and leather you can lay your eyes on in this 4-minute, star-studded affair came from the LA-based adult store. It actually makes sense. After all, it's not like you can just fabricate a latex blouse out of thin air. Of the $13,000 worth of borrowed items, Swift ended up keeping close to $5,000. It may sound like Tay is creating a top secret, super scandalous wardrobe for a certain Mr. Harris to enjoy in private, but, more likely, that's the total cost of the clothing that actually ended up being used in the video.

After all, in just the opening scene alone Swift's barely-there outfit retails for $235, while Selena Gomez's top comes in at a steep $360. Gentry announced that the store plans to produce a full run of all of the items shown in the video, which means that all you daring vixens out there can fight your arch enemies in some very, very chic fetish-wear in the near future.