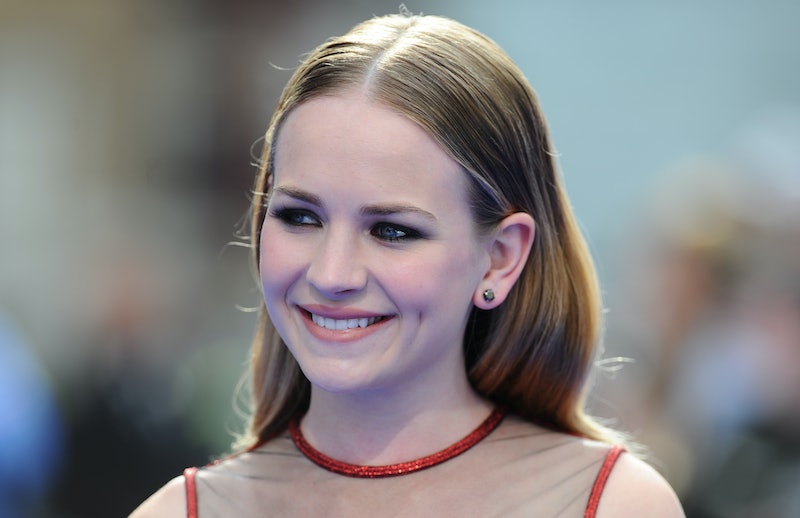 Important question: Have you fallen for Britt Robertson yet? If not, you should probably get on that, and quick: The young star is prepping to take Hollywood by storm thanks to her role as a science loving teen in Tomorrowland (which hit theaters Friday), so it won't be long until she's pretty much everywhere. Luckily, though, Robertson already has several interesting roles and projects to her name, so it shouldn't be too hard to get acquainted with her work quickly.

The 25-year-old actress has proven herself to be a chameleon on the small and big screen, and has played all sorts of characters — from quirky and sweet, to those with a harder edge. Case-in-point: Robertson was the romantic lead in The Longest Ride, a rebellious teen in Dan in Real Life, and a small, but key part of Jennifer Aniston's Cake.

Before she becomes the official next big thing, though, there are definitely a few performances of hers that are worth checking out ASAP. From a CW show you will not believe only got two seasons, to a trip Under the Dome, to a quick stop in the land of indie movies no one ever talks about, Robertson has done it all. Here are just a few of her must-see performances:

Life Unexpected only aired for two seasons on The CW beginning in 2010, and the fact that it did not go on longer is a travesty. Robertson's Lux was a young teen who grew up in foster care. Before she can become emancipated, Lux has to get signatures from her birth parents (played by Shiri Appleby and Kristoffer Polaha, in case you need more reasons to watch). The court decides to place Lux into her biological parents' custody, though, and from there the show becomes heartwarming, sad, and completely addictive. Robertson was a revelation as Lux — if you don't watch anything else on this list, at least make sure you watch Life Unexpected.

Jennifer Aniston is the undisputed star of Cake. Portraying a woman suffering from chronic pain, Aniston gave her best performance to date in this film. In contrast, Robertson's role as a runaway was just a small piece of the film — but it was an important piece. Her role as Becky is too spoiler-y to discuss in detail, but Cake is well worth checking out for Robertson and Aniston.

3. Angie, Under the Dome

Robertson was the MVP of Under the Dome Season 1. Angie was the quintessential small town girl who wanted to be anywhere but home — then she became physically trapped thanks to a giant dome. Robertson gave Angie a snarky edge to go along with her strong big sister instincts, and the results were a character no one wanted to mess with — not even the scariest people on the show.

In true Nicholas Sparks fashion, The Longest Ride is a super intense, cryfest of a movie. What makes it so important for Robertson, though, is that it's one of the few times she has gotten to play an adult onscreen. Robertson is usually cast as a teen, but, as Sophia, she was given the opportunity to play a woman who falls in love with a cowboy, and befriends an intriguing, older gentleman played by the great Alan Alda.

As the middle child of Steve Carell's Dan, Robertson went full-on lovelorn teen for the role of Cara. Interestingly, Cara spends the entire movie wondering if three days is long enough to fall in love, making her the perfect mirror to her father's predicament. As Dan falls for his brother's girlfriend, he begins to understand Cara better, leading to some sweet father/daughter scenes.

6. Katie, Ask Me Anything

Ask Me Anything is one of those perfect indie films worth seeking out. Katie is very much a character of this generation: she is a little lost and turns to the Internet for affirmation. Robertson takes Katie's imperfections and runs with them, ultimately giving the movie its soul.

I love supernatural dramas, and while The Secret Circle wasn't perfect, it was a fun CW show about a group of teens discovering they were witches. The show only lasted one season, but its atmospheric touches made it memorable. Cassie lost her mother at the start of the show, which gave Robertson a chance to delve into both the grief of losing a parent and the wonder of discovering her powers.

Made-for-TV Disney movies will always be my jam. In Avalon High, Robertson plays Allie, a young girl who becomes part of an elaborate retelling of Arthurian legend, high school-style. It's not Robertson's most challenging role, but Avalon High is a stellar popcorn movie.

Robertson and Teen Wolf's Dylan O'Brien star as teens falling in love over a long weekend — think Before Sunrise, the MTV years. Adorable and full of long talks and teen angst, The First Time is a treat for romance fans and Robertson fans alike.