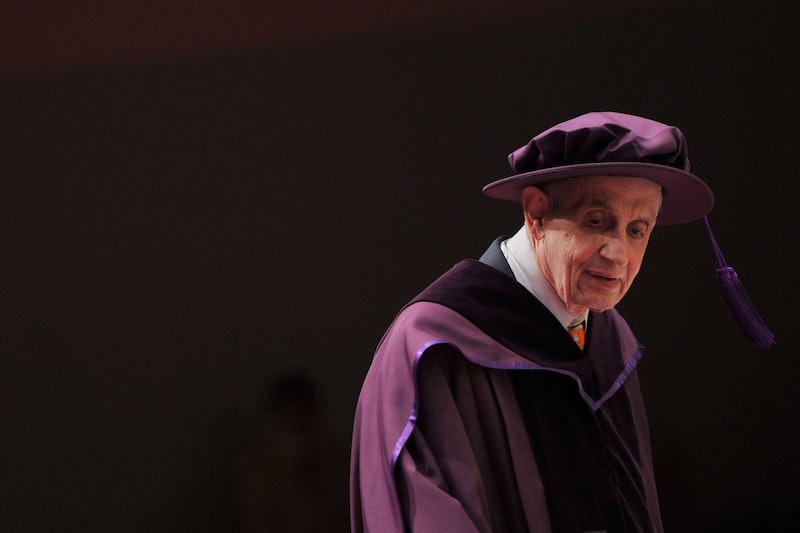 John Nash, the world renowned mathematician and subject of the film A Beautiful Mind, died in a car accident with his wife Alicia Nash on Sunday. The duo was returning from Norway before the crash, where Nash had received the Abel Prize for his work in partial differential equations, which are used to describe the basic laws of scientific phenomena, according to a statement from Princeton University. Nash has been a senior research mathematician at Princeton since 1995, and he taught a number of advanced-level math and game theory courses at Princeton. Students have described what Nash was like as a professor, saying his tests were hell but his quirks were unforgettable.

Nash was known for his original thinking and his determination to tackle problems that others didn't dare take on. According to The New York Times, a one-sentence letter written to help support his application to Princeton’s doctoral program in math only said, “This man is a genius.”

The Oscar-winning film A Beautiful Mind, featuring Russell Crowe as Nash, told the story of Nash's struggle with schizophrenia, which peaked during his time as a professor at Princeton. At one point, he gave a student what he said was an intergalactic driver's license, according to the Washington Post, and he believed the Times was publishing messages from extraterrestrials and that he could understand them. But, after hospitalization, severe electroshock therapy, and a number of medications, Nash decided to fight his delusions and hallucinations with their source and the source of his brilliance — his mind. He dropped all medication use and decided he was "going to think rationally," according to the Post.

Princeton University students have a number of interesting stories to tell about Nash, who was known for walking from his home to the school every day while talking to himself (probably about something brilliant). Here are a few things that make Nash a once-in-a-lifetime professor for students.

He Had A Love of Classical Music

If you visit Nash's Princeton website, there are links available to his current research interests. If you click through to the "Mezzanine.Directory/" link, there's a weird file called "Transfer.Elevator.and.Photos/." Within that are four mp3s to the Brandenburg Concertos, a collection of works presented by Johann Sebastian Bach. These files are lumped in with other examples of his current research and work, according to the site, so it's pretty likely that the concertos were a few of the tracks he listened to while research, and he wanted to share them with his students.

In a question/comment thread on Quora asking what Nash was like as a professor, many students did say Nash was a bit quirky. Jon Hersh, an economist who worked with Nash for a short time while working on his Ph.D., said "John Nash is normal math-genius eccentric, but not crazy crazy." He wrote that Nash was like what you'd imagine someone's favorite, nerdy math professor would be like:

John doesn't act like you or me. Then again, we don't possess the kind of brain-power he has and haven't spent a life creating abstract proofs alone in a library. Most really good mathematicians I know share this same trait: a limited, almost muted outward persona that masks mental fireworks happening somewhere inside.

Another student, Andrew Lazarus, was an undergraduate student at Princeton during the 1970s, when Nash was still struggling with his mental illness. He said that one day early in his freshman year, before he knew anything about Nash, he stopped in the corridor and asked Nash what time it was:

He said "It depends what you mean by time!" What followed made sense only to him and I backed away quickly.

He Was Extremely Passionate About His Work

Another former student, Brian Roemmele, described the acceleration of Nash's mind as "a run away freight train, picking up ideas and concepts and dropping off others." When Nash described something he was thinking or working on to people around him, the student said he could be very animated, using his hands and becoming "utterly consumed" by the progression of his thoughts.

He Had A Hell Of A Sense Of Humor

Hersh described Nash as a "world-class troll," on Quora. Hersh said Nash would sometimes do and say strange things and get away with them because people thought he was "crazy." For example, Hersh said that he attended a conference with Nash, and a student came up at one point and asked for a picture with Nash. Nash agreed and handed the camera to Hersh, but when Hersh raised the camera, Nash turned sideways so that the photo only captured his profile view. The student walked away confused, but then Nash winked at Hersh, acknowledging his sly joke.

On a separate occasion, Hersh said he was studying for an exam in one of his advanced economics classes. A lot of the material included things Nash had helped prove himself, so Hersh asked Nash if he could explain something that was particularly difficult. Nash responded in a characteristically dry way with "No. I have no idea how that's solved."

Jane Huang also shared a story on Quora about Nash's humor outside of the classroom. She wrote that her sister-in-law's friend who lives in Princeton, New Jersey, went to the movies one night, and the movie theater showing the film was particularly empty. Apparently Nash walked up to the woman, who was surrounded by empty seats, and said, "You are sitting in my seat."

His Tests Were Super Hard & Names Were A Big Deal

John O'Brien wrote on Quora that he was a freshman at the Massachusetts Institute of Technology, where Nash taught from 1951 to 1959. He said Nash's exams were mostly straightforward but the last question was always impossible:

When the term was over, a classmate asked why his exams were like that and he said, "the last question is always an important one in math that had not yet been solved; I hope someday a bright mind not yet filled with the conventional wisdom will solve it."

According to Sylvia Nasar's biography on Nash, which inspired the film about him, Nash also once gave a test with four questions, the first of which was "What is your name?" Even though the test booklets had a space for a name on the front, Nash wanted students to write "My name is... ." If they didn't they would lose 25 points.

He Was Brilliant In Other Areas Outside of Math & Economics

Roemmele wrote that the first time he saw Nash was in the 1950s at an L5 Society Space Studies Institute Seminar, which promoted ideas about space and resources. The student was sitting outside and eating ice cream with a group of students, Nash, Gerard K. O'Neill, who founded the L5 Society, and physicist and mathematician Freeman Dyson. He said O'Neill asked Dyson and Nash what they thought computers would mean to us in the next 50 years. Freeman said "everyone would have one or more to do many tasks so that humans could spend time doing more important things," which was a revolutionary idea.

But Nash showed his true brilliance with his response:

Freeman that is ridiculous, computers will be used to calculate better chances to date the pretty girl next door that does not notice you.