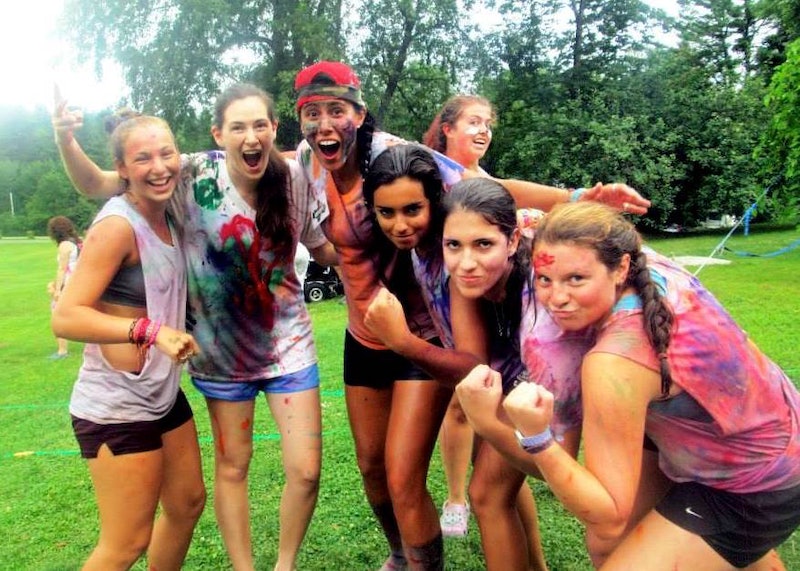 I’d be lying if I said that The Parent Trap and Bug Juice didn’t play a huge role in my decision to become a camp counselor. I didn’t expect to find a long-lost twin or to subsist on a mysterious sugary drink, but I wanted to be outside all day, sleep in a cabin, and avoid an internship that would have me organizing files eight hours a day. As silly as my reasoning was, I realized shortly into my first summer that I’d have more than bug bites and an embarrassing tennis tan to show for my experience.

Camp turned out not to just be fun, but also rewarding, and my summer in Maine grew into four. Still, friends and family were confused about why I’d want to commit almost three months of the year to living in a cabin (without electricity, mind you) in the middle of nowhere. To me, it was a chance to become a better version of myself. In between getting lost on winding, rough roads, growing accustomed to indecisive weather, and untying miles of knotted friendship bracelet string, I learned unexpected lessons about myself and dealing with challenges that life throws at you.

Here are eight essential life lessons I picked up as a camp counselor.

1. You Can Handle More Than You Think You Can

Just as camp pushes campers outside of their comfort zones, I found that being a counselor forced me to confront fears and learn how to handle new situations. For example, my natural reaction to seeing a mouse has always been to scream and immediately jump on the nearest chair. It doesn’t matter that I’m hundreds of times bigger than they are or that they can climb better than I can — my fear is as powerful as it is irrational.

I’d like to say that camp cured me of my phobia, but waking up to find a mouse scurrying alongside the wall within inches of my bed was just as nightmarish the third time as it was the first. In fact, it got worse when seven (yes, seven) mice were caught in traps set up around the perimeter of my bed one evening. My horrified reaction fanned the flames of panic in the bunk, and suddenly I had to figure out how to dial it back to help calm everyone down. Although I couldn’t bear to leave my bed in the corner where it had been, I did manage to reassure a camper whose terrified trembling was actually audible that night. It put my fear into perspective, and I eventually sucked it up and dragged my bed back to its original corner.

2. Fake It Till You Make It

No one enjoys every aspect of camp 100 percent of the time, but you’d be surprised by how acting like you're having fun can convert an unpleasant activity into a good time. I secretly was not a fan of our weekly campfire, because sitting and singing what felt like the same songs week after week was not high on my list of enjoyable pastimes. At some point, a fellow counselor confessed that she felt the same way. I don’t know how it started, but our participation in campfire quickly escalated from lackluster to completely over-the-top-enthusiastic. The more ridiculously into it we acted, the more fun it became. I’d always been told that you should fake it till you make it, but experiencing how my attitude about campfire changed reinforced the message.

3. You Get What You Give

What you get out of an experience is directly impacted by how much you're willing to put into it, and camp is no different. In my last summer, we were invited to participate in an inter-camp Quidditch tournament. I hadn’t even realized the game had been adapted for real life, but I immediately volunteered to help teach it because it sounded both absurd and awesome. Over the next few weeks, we had multiple groups of campers sign up for the activity, but one in particular was, well, magical. What set them apart was that each and every girl was fully committed to having fun. Whether we were simply running around with our “broomsticks” (a.k.a. lacrosse sticks), humming an off-key version of the Harry Potter theme song, or finding “wands” (a.k.a. twigs), everyone got into it.

4. You Don't Always Have To Be Right

As an authority figure, it feels like you should always have the answers. The fact of the matter is, though, that there will be times — likely many of them — when you either have no idea how to handle a situation, or you get it wrong. It doesn’t have to be the end of the world. I quickly learned that it’s okay to ask for help and to admit when you’re mistaken. Your fellow staff and campers will respect you more for it down the road.

In my first summer, I went to vent to another counselor when a camper's sass was getting under my skin. Little did I know, the camper was behind me. She overheard and immediately called me out on talking behind her back. Even though I felt my irritation was justified, she was right that I’d handled it badly. I apologized, admitted I was wrong, and assured her it wouldn’t happen again. We were able to move on and never had any further problems.

5. Alone Time Is Key To Sanity

Being surrounded by others all the time is mostly fun, but it’s also exhausting — so, so exhausting. If you never take time for yourself, it can get overwhelming. I found that it was important to take time for myself, whether on a day off or during a free activity period. As in real life, a short nap or fitting in the time to read quietly works wonders. People are great, but sometimes you just need to recharge.

My relationships with campers and fellow counselors evolved over my four years. On numerous occasions, I saw campers I’d found somewhat bratty or obnoxious one summer become completely sweet and easygoing the next. Not only did they mature and grow, so did the staff, myself included.

Midway through my first summer, I got into an argument with a coworker. Even though we debriefed about it and reached a truce, we basically avoided each other until we were assigned to the same department…two summers later. I was wary going into it, but to my surprise, we had both reached a point where it didn’t matter anymore. Instead of just managing to tolerate each other, we became close friends.

7. Limiting Your Use Of Technology Can Be Healthy

One of my favorite parts of camp was being unplugged. Not having constant access to my cell phone, the Internet, and a TV made it much easier to be present. Without the usual distractions, our bunk would gather around by flashlight for group activities, to talk, or even to read as a group each night, and it always amazed me how quickly we’d bond over the course of each camp session. Even now, it drives me nuts when anyone tries to split their attention between me and their phone.

Being a camp counselor isn’t easy. As fun as it is the majority of the time, it can also be at turns stressful, overwhelming, and frustrating. Even when you’re exhausted and in desperate need of a break, though, there are moments where you see your campers catch onto a lesson you’ve been trying to pass on, or they recognize your hard work, that suddenly make it all worthwhile. Knowing what a difference a simple “thank you” can make, I’ve become more mindful about sharing my own appreciation.