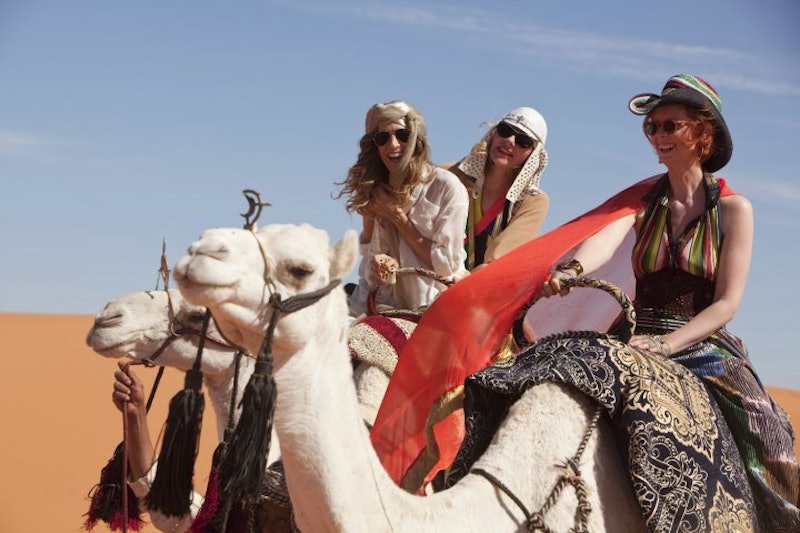 Sex and the City 2 was supposed to be another fun movie with Carrie Bradshaw and the gals from everyone's favorite iconic HBO comedy series. After all, the first big screen iteration did well — why not another? Well, Sex and the City 2 gave us some ridiculous moments, from Samantha's Birkin bag flinging condoms all over a souk (market) in Abu Dhabi to Carrie's weird hats in both New York and Abu Dhabi. In honor of the movie's fifth anniversary, I re-watched it for you and screencapped the most ridiculous moments for your viewing pleasure.

In 2010, Sex and the City 2 was critically panned and banned in Abu Dhabi. The movie has a 15 percent "Rotten" rating at Rotten Tomatoes and the New York Times ' A.O. Scott rated the film 2.5 stars out of 5. "Sex and the City 2 is about someone else’s boredom, someone else’s vacation and ultimately someone else’s desire to exploit that vicarious pleasure for profit," he wrote. Which isn’t much fun at all.... Your watch will tell you that a shade less than two and a half hours have elapsed, but you may be shocked at just how much older you feel when the whole thing is over."

Which is why I understand if you haven't re-watched it. I actually haven't seen it since 2010, until now. Come along on a journey of SATC ridiculousness from the out-of-control movie that is Sex and the City 2.

Carrie's narration states that this is from when she worked CBGB's. Damn.

3. Just Another Day For Samantha At Work

4. Miley Cyrus & Samantha Wear The Same Dress At A Premiere

The joke here was that Samantha was wearing a dress too young for her now 50s self. And isn't it so weird to see vintage "Party In The USA" Miley again?

It looks like some kind of hornet's nest. Someone kill it before it kills them all.

6. Samantha Jones Shows All The Skin She Wants In Abu Dhabi

Even if it's forbidden in a Muslim country. Come on, Samantha. Can't you just respect another culture for just a second? (Nope.) Her blatant disregard for the culture gets her into trouble later.

Because whatever she wore to the Abu Dhabi bar makes her look like the next villan Mario must face after Bowser.

9. Samantha Jones Will Suck Whatever She Wants

Even in a Muslim country. And there she goes, sucking on a shisha (hookah) for everyone to see. So disrespectful. Oy vey.

Ah, the infamous moment when her condoms spill out of her Birkin bag and Samantha yells, "Condoms! I have sex!" to a crowd of Muslim men. And she's showing lots of skin while having a hot flash. The cringe factor is through the roof in this scene.

11. Carrie & The Women Sneak Out Of The Souk

Wearing veils. I can't even tell if this is offensive anymore.

By showing some forbidden leg, of course! Even though it's forbidden. I don't even know.

More like this
Daryl McCormack On His Unusual First Audition With Emma Thompson
By Olivia-Anne Cleary
Kimberly J. Brown & Daniel Kountz Looked Back On Their ‘Halloweentown’ Romance
By Stephanie Topacio Long
All The Sneaky Lindsay Lohan Movie Easter Eggs In Her New Ad, Explained
By Stephanie Topacio Long
The 'Hocus Pocus' Sequel Finally Has A Release Date & It Makes Total Sense
By Shannon Barbour and Radhika Menon
Get Even More From Bustle — Sign Up For The Newsletter