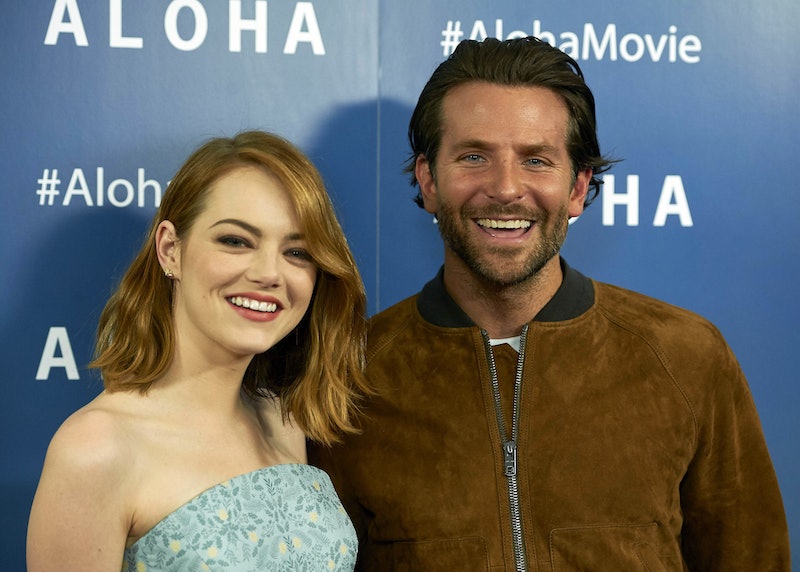 My response to news that Bradley Cooper and Emma Stone were going to be starring alongside one another in the upcoming romantic comedy, Aloha, was an emphatic "YAS!" Not only have these two proven to be inimitably versatile in their craft (props, guys), they also seem to be among the coolest, funniest, and more laid-back celebrities you could meet. Seriously you two, coffee is on me if you ever wanna make my dreams come true and chillax. In Aloha — which hits theaters on May 29 — Cooper plays military contractor, Michael Gilcrest, who travels to Hawaii and unwittingly reunites with an ex (Rachel McAdams) and also develops romantic interest in his assigned Air Force watchdog, Allison Ng (Stone). The movie also costars Bill Murray and John Krasinski, so for reals, what else could you ask for?

Although I am still waiting — with a breath very much bated — to see the film, I would wager a bet that Cooper and Stone's chemistry in Aloha is going to be off the charts based on the movie's trailer alone. This begs the question: could Stone end up being Cooper's new "work wife"? Don't get me wrong, I'm a certified shipper of Cooper and Jennifer Lawrence as the perfect "work spouses", but we all know Hollywood A-listers don't always have schedules that can sync up, i.e., we can't constantly have Cooper and Lawrence sharing the same screen all the time. That's where Stone comes in. Let's take a look at why Stone and Cooper should probably just accept some more scripts together now, because they'd be perfect work spouses.

They Crack Each Other Up

Ch-ch-check out how adorable these two are cracking each other up during an interview. Both Cooper and Stone love to laugh and what better way to enjoy a platonic work marriage than with some giggles?

They Both Have Some Sweet Moves

Stone is poised to showcase some killer dance moves with Murray in Aloha and also put on her dancing shoes for her turn as Sally Bowles in Cabaret. And we all remember Cooper's sweet moves in Silver Linings Playbook.

They're Both Extremely Versatile

While both stars got their start in comedic films, they have proven through their various works that there isn't a single genre they can't master.

Could Either Of Them BE Any Nicer?

Try to come up with a bad thing to say about either of these genial celebs and you're bound to come up short. Both Cooper and Stone have proven that fame doesn't erase humility as they continue to rank as two of the nicest stars around.

Both Have Taken Time To Do Stage Acting

As mentioned, Stone did an impressive turn during her stint in Cabaret, while Cooper received many accolades for his performance in The Elephant Man.

Emma Stone Is A Master Of On-Screen Chemistry

Seriously, no one can avoid having chemistry on-screen with Stone — she's that awesome.

During an interview with Extra, Stone noted that Cooper had some concerns during filming of Aloha as he was preparing for his role in American Sniper, which he had to bulk up for. Stone convinced Cooper to "relax" while shooting their movie in Hawaii. ""I said, you’re gonna get huge… relax. He said, 'Yeah, you’re right,' so he relaxed.” Well played.