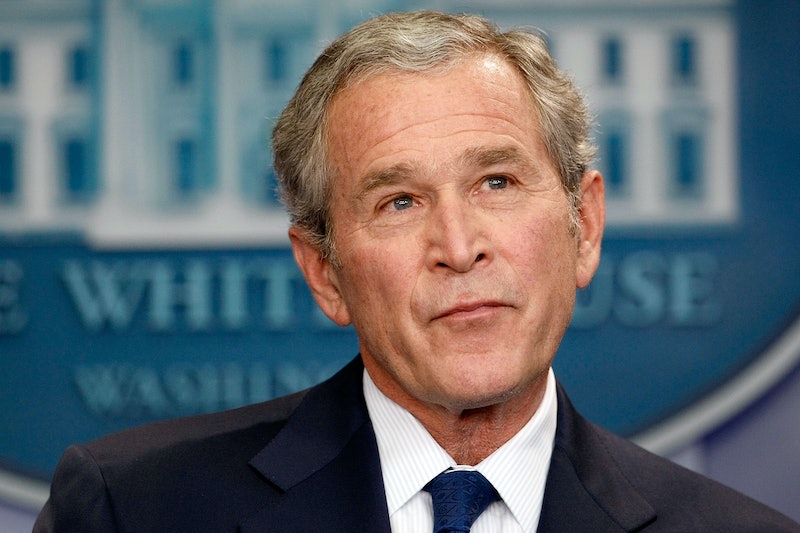 It seems like so many people's views on same-sex marriage have evolved in recent years, doesn't it? Whether you're talking about President Obama, who ran in 2008 while officially opposed to marriage equality, or presumptive Democratic 2016 frontrunner Hillary Clinton, who opposed it until 2013, a whole lot of high-profile people have changed their minds on same-sex marriage. This name, however, may make you do a bit of a double-take — former President George W. Bush almost officiated a same-sex wedding in 2013, ultimately bowing out due to scheduling issues.

The details were buried within a Boston Globe story about likely GOP presidential candidate (and former First Brother) Jeb Bush's new home, which is being built on the family's top-dollar compound in Kennebunkport, Maine. In the process of describing what sounds like a very nice place to call home — picturesque views, a sprawling estate, the whole deal that you'd expect — Boston Globe staff writer Matt Viser let out a gem of a tidbit.

It's important to remember, because same-sex marriage is so much more widely accepted now: Bush was effectively the GOP's standard-bearer for eight years, and he only left office in January 2009, just over six years ago. In other words, it really hasn't been that long. But long enough, clearly.

Some mornings, Bush drops into H.B. Provisions, a cozy general store owned by Bonnie Clement and her wife, Helen Thorgalsen (George H.W. Bush made international headlines when he attended their wedding in 2013; George W. Bush offered to perform the ceremony but had a scheduling conflict).

It's possible you don't remember if it was before your time politically, but in the run-up to the 2004 presidential election, this was not the sort of thing you'd expect from Bush. Obviously, politicians may overstate their feelings in one area or another to suit the common sense of the time — that's how many people view Obama's 2012 awakening on the subject, in view of past indications he'd supported marriage equality.

But Bush's opposition to marriage equality wasn't just a nominal or trifling thing. Quite the contrary, it was a big element of his campaign — Bush ran, in part, on a constitutional amendment banning same-sex marriage in all 50 states.

The only question, really, is whether he actually felt strongly about same-sex marriage, or whether it was a move out of political convenience. Clearly, there were others involved with that campaign who've changed their minds — even Bush's campaign manager in 2004, Ken Mehlman, who's since come out as gay and a marriage equality supporter.

In any event, if it is a matter of Bush softening over time, it's nice to know that even George W. Bush can show some personal growth on this issue. Going from "I'm the most powerful person on Earth and I'm gonna make sure none of you can ever get married" to "hey ladies, can I officiate your wedding?" Evolutions don't get much bigger than that. But even if it seems unthinkable, Bush wouldn't be alone in his changing attitudes — since 2010, an ever-increasing majority of Americans have supported marriage equality.