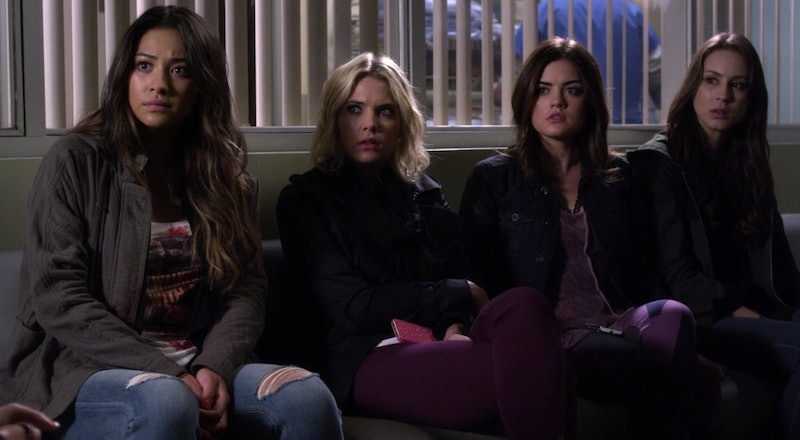 Once again, it's time to turn to Netflix for a good old Pretty Little Liars search for Big A clues, aka re-watching old episodes. Supposedly, there have been hints about A's identity sprinkled throughout the past few seasons, when we were just too busy not thinking about some guy named Charles to notice all of them. However, one guy we were thinking about way back when was Nate St. Germain, Maya's cousin. Or so we thought. Though he was never part of Charles' game himself, the A Team wanted him dead and now after re-watching the Season 3 PLL episode, "The Lady Killer," I'm trying to figure out why.

"The Lady Killer" was the midway point for Season 3, so it needed to end with a big cliffhanger, naturally. It capped off a half-season arc revolving around Maya's mysterious cousin, Nate, showing up in town and immediately hitting it off with Emily. Turns out, this guy was Maya's insane stalker from Camp True North (where she was sent at the end of Season 2), he killed her — maybe? — and now he's out to kill Emily too.

I say "maybe" he killed her, because that's never actually addressed in the episode. It's just assumed. Going back and re-watching PLL episodes is so enlightening, because you pick up on details like this. In "The Lady Killer," it's never explicitly stated that Nate was the one who killed Maya. However, Garrett goes free after Nate's dead... and hold on, let's break this down, piece by piece.

For Starters, Mona's Sneaking Out Of Radley

Mona snagged a key card and a nurse's outfit, and in this episode is coming and going out of Radley as she pleases. Even though she's "left" the A team, she's clearly still working for them. The back and forth between good Mona and bad Mona is enough to give me whiplash. But in "The Lady Killer," she's bad. She also appears to come face to face with A at one point during the episode, so does she know his true identity? Are there still secrets left for Mona to share?

What Side Is Paige On?

At this point, the Liars think Paige is either on the A team, or Big A herself. However, they eventually decide that they were wrong on both accounts.

Still, Paige does get a suspicious text message from A, or someone claiming to be A, in this episode. Either way, I think it's important to note where her thumb is on her phone screen. She's clearly trying to obstruct a name for us, and later she'll say that it was Emily she was trying to protect. OK, but couldn't we then have seen Emily's name on the phone screen? That wouldn't have been a huge deal. But she covers it up.

Paige also doesn't seem too shaken up by the ordeal Nate puts her and Emily through. Her actions throughout the episode actually make me wonder if she's in on the whole charade — whether with A, or with Nate, I don't know. I feel like she actually started off working with A, and then Nate got in the way. A few seasons later, I'm now willing to wager that Paige is still working with A.

Ah, a new A lair. This one's still got a ton of creepy Ali pictures, Ali masks, and Ali memorabilia. It also has a dollhouse, which we probably should've paid more attention to in retrospect.

Mona's seen going to this new lair, and she meets someone there. He/she is completely obstructed from us. Mona also takes a phone call from A, and is informed that the "plans have changed." The initial plan was to plant Maya's cell phone on Paige so she looked guilty of murder but then...

Why Did A Want Nate Dead?

Nate, who turns out to actually be a guy named Lyndon James, is a total creep and psychopath — we can all agree on that. He kidnaps Paige (allegedly) and then kidnaps Emily, and threatens to kill them both. It's Emily who kills him in the end, and later at the hospital she gets a phone call from A, who informs her that he "owes her one." Clearly, it's over the death of Nate/Lyndon. But why?

I feel like this all comes back to the greater Maya mystery. After reading a theory that she's still alive, I completely believe it. I also believe that she knows something about the night Ali disappeared, and I am willing to bet she knows something about Charles. Maybe Nate also knew these secrets, so that's why he needed to die. Or maybe, Nate could have eventually have led them to Maya (though unintentionally, because he assumed she was dead) and that's why A wanted him out of the way.

Regardless of Charles' motives, I think this is the first, and only, time that A and the Liars have been on the same page about something — Nate is bad news.

Toby's The New A Team

Remember how stressful it was when in the final seconds of "The Lady Killer," it was revealed that Toby was also sporting a black hoodie and hanging out with Mona? Toby wouldn't do a thing like that right? By the end of the season, we learned that he only joined the A team to protect Spencer, and I believe that was his true intention.

However, could Toby have some A information we're all forgetting about? He was privy to Mona leaving Radley, so he was probably involved in some sort of A group message at some point. I think there's a possibility that from his time on A's side, Toby knows something that he's either forgotten about or doesn't realize is important.

Nothing To Do With A, But SPENCER'S OUTFIT

I just thought everyone should look at this stunning outfit. Are they horses? Donkeys? Does it even matter? Is that belt with a giant bow on the back of it sheer perfection? Yes to all of this. I will spend every dollar I have to buy this in my size.

In conclusion, what beef did A have with Nate? Was he simply meddling in A's affairs, or was there more to it? "The Lady Killer" just reaffirms my belief that Maya's story isn't over, and we might be hearing more of it when Pretty Little Liars returns for Season 6.