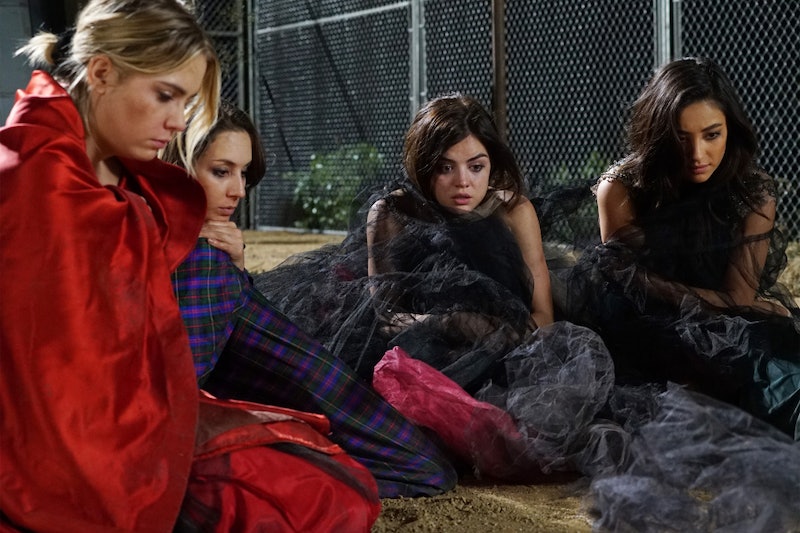 It’s time to go back, Pretty Little Liars fans. Since we have no new information about Charles or the liars until at least June 2 (when Season 6 premieres), it’s time to dig deep into past episodes and do some sleuthing. I recently went back to Pretty Little Liars' Season 3 episode “CrAzy” to see if there were any good Charles or Big A clues back then, and boy, was there an awful lot of foreshadowing of the Liars' eventual fates.

Before I get to that, though, let me set the scene. “CrAzy” is the first time we see a few characters: Ella’s gross eventual fiancé Zach (the one who disgustingly hit on underaged Hanna) and the inimitable CeCe Drake. The first time we see CeCe is with her back turned, and all of the liars think that they’ve seen a ghost, namely the ghost of Alison DiLaurentis. Hanna is close to going to jail because the police think she’s responsible for Ali's murder, and Wilden is trying to get a blood sample from her. Ella is dating again (she actually goes out with Ashley Marin’s future beau, Pastor Ted, which I forgot about completely), and Nate, who at this point we think is Maya’s cousin, is trying to get with Jenna. Oh, and Mona is still in Radley.

Now that I've cleared all that up, there are two major plot points in this episode that foreshadowed/completely mirrored later events. A’s been in this for the long con, y’all.

Mona Was Already Terrified Of A In Season 3

Mona played crazy in Radley for a while, but I’m starting to think now that it was a way to keep herself safe, rather than throw off suspicion of still being on the A team. Early in the episode, there’s a flashback to a time when Mona and Hanna made up a game that uses acrostic poems to make words — the first letters of each word spells out another word. When Hanna and Aria visit her in Radley, Mona’s gibberish spells out “not safe” and a website that turns out to belong to Maya.

In the “A” sequence at the end, A pulls off the heads of the dolls that Mona is playing with to reveal a recorder — he had recorded their whole conversation. I think that Mona knew that she wasn’t safe, and she stayed in Radley as a means of her being under surveillance. A can’t just steal a patient from a mental hospital, can he? It’s also worth noting that Mona is obsessed with playing with the dolls in the children’s ward at Radley, which foreshadows the way that she herself is treated like a doll at the end of Season 5. Mona’s known this game the whole time, and all of her behavior in this episode underlines the theory that Maya is more integral to this game than we’ve been led to believe.

A Is A Bloodthirsty Forensics Genius & Hates Hanna

When blood is found on an anklet of Ali’s and it’s not her blood, fingers begin to point all over the place. They, of course, land on Hanna, and a not-yet-dead Detective Wilden tries to get a blood sample out of her before the episode is through. Unfortunately, so does A — he puts a trap Ouija board in Hanna’s house, complete with spikes, with a note that says, “see how easy it is for me to get your blood?” The smearing of blood on garments was a big storyline in Season 5, and Hanna was the first one to go to jail because of it. A taunts all of the liars in Season 5, saying that he can put their DNA evidence on basically anything, but this episode shows that Hanna was the first one to go down for it all the way back in Season 3. Why does Charles hate Hanna so much? A has been planning this game for a long time. He must be some kind of forensics expert. We still don’t know Charles’ background, but I bet he’s a mad scientist of some sort.

These two notes are huge future plot points in the show, but unfortunately, I can’t tell where they’ll lead in Season 6. Now that we know Big A is Charles, hopefully we’ll learn more about his game and just why he’s been torturing Mona, and Hanna, for all these years.