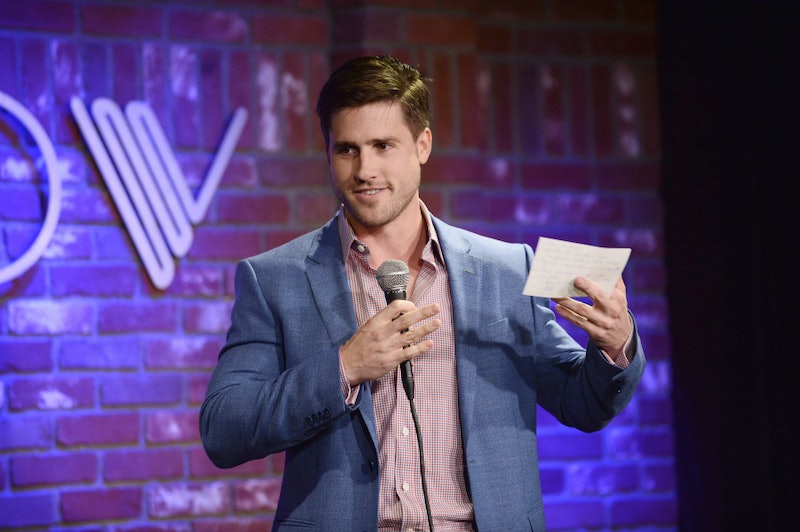 Kaitlyn may be super impressed with this season's group of guys on The Bachelorette, but let's keep in mind that she said that after she'd only met them five minutes ago. And even in week two, it's usually still waytoo early in the game to judge these guys — except for JJ. I am totally judging JJ, but only because he is letting his douche flag fly in a major way. On Monday night's episode, he wasn't holding anything back, and the best part? I don't think he even realized how bad he was making himself look just by opening his mouth. JJ is definitely the resident Bachelorette d-bag, and it's ridiculous.

Over and over again, JJ reminded us that he has a daughter, and that's awesome — except he also lives with his parents, may or may not be unemployed, and doesn't seem to realize these are things he might not want to brag about. Will he ever realize it? Kaitlyn's obviously too nice to tell him, but fortunately, this is where one of my favorite lady comedians come in. After a meeting with Amy Schumer (who was there to guide the guys on a comedy-related challenge), she laid it all on the line: "JJ's a sweetheart. He's just missing charisma, humility, a sense of humor."

Uh, yeah. That's exactly it. And later, she went on to call him a turd, something else I completely agree with. In fact, "turd" is probably the best word I can think of to describe him.

Bad news: Kaitlyn doesn't seem to notice that he's awful. She loves how lovingly he talks about his daughter and seems to ignore all the terrible stuff, which I'm genuinely surprised at. Here's hoping that JJ isn't long for this competition... as long as Kaitlyn realizes that he isn't just a sweet single dad.