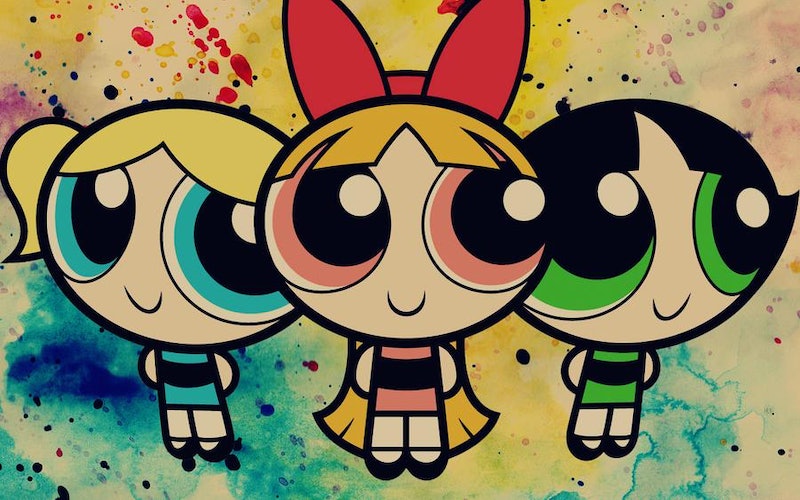 Growing up, I used to love watching The Powerpuff Girls and whizzing around my living room pretending I could fly. It wasn't until recently when I saw some awesome adaptations of the crime fighting trio on Deviant Art that I began to ponder upon what the sisters would be up to now and what the world had in store for The Powerpuff Girls as adults.

For those not enlightened by the adventures of these trouble-fighting triplets that were created with "sugar, spice and everything nice," the story follows Blossom, Bubbles, and Buttercup, who were created by scientist Professor Utonium. It all sounds a bit like Frankenstein and in a way I guess it was; Professor Utonium was trying to "create the perfect little girls," but his plan went awry when he accidentally smashed a vial containing the magical, superhero-creating Chemical X into the mixture. From the off, the girls used their superpowers to fight criminals and restore order to their city. The girls' powers include: flying, x-ray vision, and super speed and strength, to name a few.

Blossom is the red-headed leader who is insanely intelligent and tactical, and her most special power is her ice breath. Bubbles is the sweet, innocent sister who loves animals and can speak different languages, plus the languages of animals. Buttercup is the tomboy of the gang and is a really tough cookie. She doesn't have a unique superpower but what she lacks in unique abilities she makes up for in fighting spirit and tenacity, not to mention that she is the strongest and fastest of the trio.

So here's what I think the girls would be up to nowadays and how their style would have transformed:

Growing up, Blossom found it quite difficult to fit in at high school due to her extremely high level of intelligence, which unfortunately led to her being bullied. Obviously Buttercup and Bubbles attempted to thwart the bullies when they could, but Blossom didn't want them to have to put their social lives and friendships in jeopardy. Thus, Professor Utonium took Blossom out of public school and sent her to a special private school for gifted students. Here Blossom flourished and went on to study a degree in Biochemistry followed by a PhD, and after this, she joined BioVerse Planetary Forces — a (fictional) organization that creates cutting edge technology that is eco-friendly and sustainable.

During university, she almost failed an exam due to her on again, off again relationship with Brick the leader of The Rowdyruff Boys. However, her sisters got her back on track just in time for her to cram for her exam. They took the liberty of deleting his number off of her phone and blocking him on Blossom's Facebook.

Now with her head back in the game, she puts her all into her job (which she loves) and boys are the last thing on her mind. She was asked to star as Elsa in a theatrical adaptation of Disney's Frozen because of her ice breath powers, but she turned it down due to the frivolity of the job role and because Bubbles loves Frozen and always wanted to play Elsa if the opportunity arose.

Bubbles' happy-go-lucky, friendly yet naïve nature made her a hit with the popular kids at school. She made a fantastic cheerleader due to her agility and fun loving personality. However, Bubbles was shocked when her friends turned on her sister Blossom, encouraging Bubbles to do the same. Much to Bubbles' dismay, Blossom was taken out of school and sent to a school for gifted children and life for Bubbles carried on as before.

It wasn't until she was in her last year of high school that she realized her group of "friends" was using her for her powers, and she saw that she had been a pawn in their popularity games her whole adolescent life. She was happy to go back to her true self and leave the slimy guys, fake girls and meaningless friendships far behind her. Bubbles took a gap year where she travelled around the world by herself. After talking to many different people and animals all over the globe, she decided that something needed to be done about the dire state of the world's oceans. She had seen firsthand the floating islands made of garbage, fishermen illegally overfishing, and the cruelty inflicted upon dolphins in Taiji.

Bubbles became a spokesperson for all the creatures of the oceans who would tell her of the disastrous events that certain evil humans were trying to disguise and she helped uncover many unsolved ocean crimes. When she is not working on behalf of the ocean's animals, she works as an international interpreter for peace talks and meetings between world leaders. Thanks to Bubbles, the world's nations have been able to put their differences aside and focus on preserving the planet. She liaises with Blossom on regular occasions to inform the appropriate people of environmental actions that need to be taken.

Bubbles enjoys nothing more then hanging out at home with her five dogs, two cats, eighteen tropical fish, three hamsters, and her white horse called Pegasus. Although she loves spending time at home, she also enjoys aquatic sports, such as surfing and paddle boarding. She especially enjoys flying her board out to exotic locations where she can surf with wild animals. Bubbles wears vegan designer label Stella McCartney for her corporate events and press appearances but when she is relaxing at home she likes to lounge in Black Score's comedic, animal-friendly tees and anything Vaute Couture.

Buttercup's teenage life wasn't an easy ride. She grew up with a chip on her shoulder due to the fact that she lacks a unique superpower and she distanced herself from the other girls. Buttercup became the leader of a rebellious girl gang, dropped out of school, and, in fact, became the opposite of who she was as a child; she became the leader of a criminal gang. She started to date Butch of The Rowdyruff Boys during her mid teens and he led her even further off track with the pair teaming up and pulling together their groups to form one large, badass gang.

It wasn't until Professor Utonium was on death's door — due to being exposed to high levels of Chemical X radiation over the years — that she realized what she had become. Her father pleaded with her that she "stop her nonsense" and be reunited with her sisters again to fight against the forces of evil. On the day Professor Utonium passed away, she broke up with Butch, disbanded her gang, and was reunited with her sisters.

When Blossom went away to university and Bubbles embarked on her gap year, Buttercup held down the fort in Townsville and swore she would protect the streets from the evil she had unleashed upon it. She then set up her own martial arts school for girls and encouraged all of her students to follow the school's mantra: "Fight like a girl!" Buttercup loves attending live sports games and watching wrestling on TV with a mountain of snacks. Buttercup is often seen in clothing purchased mainly at Hot Topic, but when her students are entering competitions, she likes to dress up and wear anything with androgynous vibes from Maison Martin Margiela.

More like this
On The Enduring Allure & Power Of Princess Diana’s Uniform
By Eloise Moran
Bella Hadid Just Wore Y2K-Inspired Pacifier Earrings
By Natalia Perez-Gonzalez
Mrs. Wheeler Wore A Vagina Necklace In 'Stranger Things' Season 4
By Allie Fasanella
10 Miranda Hobbes’ Looks From 'SATC' That Were Totally Overlooked
By Allie Fasanella
Get Even More From Bustle — Sign Up For The Newsletter