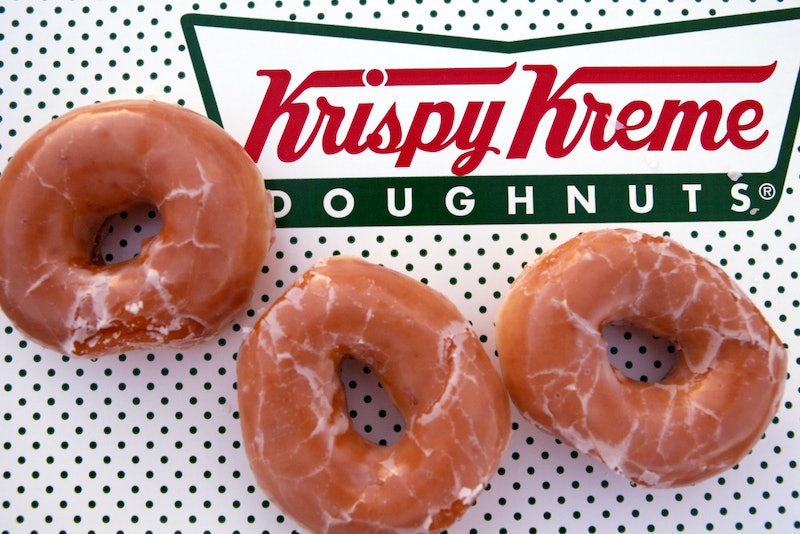 It's a good thing Krispy Kreme loves giving donuts away as much as I love eating them, because hey, guess what? You can get free Krispy Kreme donuts on June 5 in honor of National Donut Day. Hoorah! Free pastries for all!

I did not know this until today, but apparently National Donut Day is more than just a fun little food-related celebration. Created in 1938, it's actually a sort of Memorial Day for donuts: According to SFGate, National Donut Day serves as “a patriotic remembrance of the time in World War I when Salvation Army volunteers handed out donuts on the front lines to soldiers.” Like so many other holidays, it's become somewhat commercialized — but I kind of dig that the spirit of the whole thing (that is, giving out free donuts just because you can) has stuck with it.

As for how to do it? Easy: Just walk into a participating Krispy Kreme location on June 5 and claim your free pastry, no additional purchase necessary (although I'm sure it would be appreciated. Besides, aren't donuts always better with a cup of coffee to dunk them in?). Not only that, but you can pick absolutely any variety you want — none of this “one Original Glazed donut” nonsense that free food promos usually specify. However, there are still a few catches: The “participating locations” stipulation implies that not all Krispy Kreme shops will be supplying free donuts; you've got to be in the U.S. or Canada (including Puerto Rico this time!); you're only entitled to one free donut; and the offer is only valid at actual Krispy Kreme shops, not at grocery or convenience stores which happen to carry Krispy Kreme donuts. Oh, and if you live in Connecticut, you're out of luck — the offer excludes that particular state.

Come to think of it, pretty much every single one of Krispy Kreme's free or BOGO donut promos has that “excludes Connecticut” fine print… but why? Why must Connecticut must always be left in the donut-scented cold? Is it because there are so few Krispy Kremes there? As far as I can tell from the chain's online store locator, there is exactly one Krispy Kreme in the entirety of Connecticut; it's somewhere within Mohegan Sun, the casino located in Uncasville, and it's an “independently owned and operated franchise.” I wondered if the “independently owned” thing had something to do with it — but there are a number of locations scattered throughout the country that are also independently owned and operated franchises, so clearly that's not it. Maybe it has something to do with the fact that it's inside a casino. Thoughts, anyone?

Krispy Kreme Chief marketing Officer Dwayne Chambers noted in a press release that over 100,000 people claimed their free treat last year; they also chronicled their adventures in breakfast pastries via the #NationalDonutDay hashtag on social media. Why not join in the celebration yourself this year? Because, I mean… free donuts!