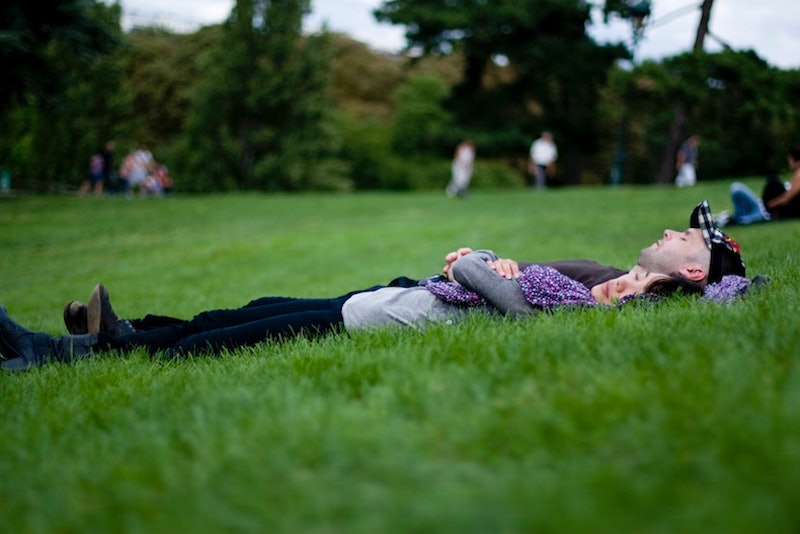 The last time I was single was during the first semester of my freshman year of college, and I like to think that I wasn't too terrible at it. My single friends and I all scampered around to parties, where I kissed engineers, football players, trust fund kids, and juniors (juniors!). Their kisses were beery — sticky and stale — but I wasn’t looking for love. I wasn’t even looking for company at the dining hall. I hadn’t been single in four years, nearly five, and dammit, I intended to make the most of it.

I made it to January. Actually, I didn’t even make it to January, if you count the regular hookup I acquired on Halloween weekend (it began, as most earth-shattering loves do, fully costumed in a frat basement). That makes for two months, or a generous four, of singledom in an otherwise unbroken spectra of boyfriends, which stretches all the way back to middle school.

Being a boyfriend girl is astronomically different from being a girl who just so happens to have a boyfriend. Instead of walking around feeling unfailingly awesome about being in a relationship (I get laid on the reg, high five!), I spend a lot of time brooding over why I can’t seem to exist outside one. I’m a fairly independent person in some respects: I live in a studio apartment, I plan quiet nights in, and I love to eat at restaurants alone. But at the end of the day, I really rely on having someone there to...what? To respond to my texts? To make me feel loved? To take care of me? It leaves me feeling clingy at best, and like an atrocious feminist at worst.

I have cruised around the therapy block too many times to count, so I’m intellectually aware that different people have different needs, and that it’s wrong to feel guilty about or to judge others for having those needs. Still, I feel ashamed. And I even raise the occasional eyebrow at other boyfriend girls. Yep, I judge myself and others like me, because I wholeheartedly believe that people need time outside relationships to grow, even if I haven’t given myself that time. It's a really charming defense mechanism. (Can’t judge me harsher than I judge myself! Can’t judge me if I judge you first!) I’m not proud. It is far better to be a boyfriend girl than a hypocrite; I’m a bit of both.

But I do understand the loneliness and uncertainty at the heart of dating. No partner can completely expunge feelings of inadequacy and insecurity — not even a string of great partners. I don’t want out of my relationship; I love my boyfriend, and I loved those who predated him (well, some). Still, I wonder if being sans dude for a year or two would force me to fill those voids myself, a chore that I’ve deftly avoided by — how else? — distracting myself with some boyfriends.

More like this
30 Sweet Valentine's Day Caption Ideas For Long-Distance Relationships
By Syeda Khaula Saad and Carolyn Steber
5 Signs You Have A Toxic Relationship With Yourself
By Lexi Inks
23 Super Sweet Things To Write In A Valentine's Day Card
By Karen Belz and Lexi Inks
Here’s What TikTok's "Mascara” Trend Is *Really* About
By El Hunt
Get Even More From Bustle — Sign Up For The Newsletter
From hair trends to relationship advice, our daily newsletter has everything you need to sound like a person who’s on TikTok, even if you aren’t.