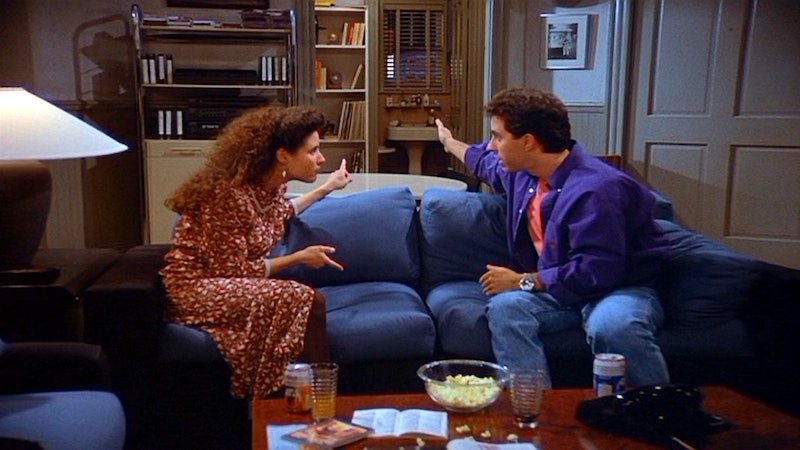 Important question time: Who here has ever watched an episode of Seinfeld at any point in their life? Everyone? Cool, that's the answer I was hoping for, mostly because I'm not in the mood to judge you for your bad choices today. If you've seen (or, honestly, even heard of) Seinfeld, you've probably heard of "The Move" — a sex move of (supposedly) Jerry's own invention that made its debut in the episode titled, "The Fusilli Jerry." The problem: It's never actually described, just alluded to. So, what exactly is The Move on Seinfeld?

Answering that question isn't as easy as you'd think. One wonderful user on a Straight Dope thread transcribed a conversation from the episode during which Jerry explains it to George Costanza:

Jerry: All right. On your bed. You got a headboard? You'll need aheadboard.George: I got a headboard.Jerry: Is it padded?George: No.Jerry: Good. How tall is she?George: Five-foot four. Why?Jerry: You can't have more than a one-foot differential in your heights.Otherwise, you could really hurt your neck.George: I can't tell ya how much I appreciate this.Jerry: George, if you could master this, you'll never be alone again.[Back at Jerry's apartment: Jerry and George have just walked in, stillconversing on the same subject]Jerry: Now, the ending is kind of an option. I use the swirl. I like theswirl. I'm comfortable with the swirl. *I* feel the swirl is a greatcapper. He uses the pinch, which I find a little presumptuous.George: Is it a clockwise swirl?Jerry: I prefer clockwise, but it's not written in stone.

I mean, I'm just trying to imagine the logistics of this whole thing, and I've got nothing. The closest move I can imagine is that maybe we're talking oral sex? Like, the swirl is the tongue? But, I don't want to draw any conclusions just yet. The Internet hasn't seemed to rest since the ever-elusive Move was first mentioned. Urban Dictionary describes it as such:

Sex move used by Jerry in the show Seinfeld. What goes into "The Move" is never revealed, and all that is known of it is that it ends with a swirl, although it can also be closed with a pinch. It was stolen by David Putty after Jerry told him about it at his garage.

OK, so not exactly the most useful definition, but then, when has Urban Dictionary ever actually been useful for anything other than teaching Cards Against Humanity players what "swooping" is?

As you might have already assumed, the Internet was not satisfied with this definition and lack of clarity from Jerry and George's initial conversation. As a result, there's a Reddit chain that has resolved to explain exactly what The Move is. One particular user tried to break The Move down into its three separate components: The swirl, the pinch, and the knuckle:

The swirl - The giver massages the receiver's clitoris with their tongue in a circular motion.

The pinch - The giver pinches the receiver's clitoris with their lips.

The knuckle - The giver massages the receiver's clitoris with their knuckle. Not particularly enjoyable, apparently.

So, it looks like this guy and I are on the same page about the whole oral sex thing. Why this needs to be a "move" and not just a normal thing is a bit annoying, because, let's face it, most (though not all) ladies love receiving oral sex and think men should be giving it more often, but I'll let Jerry Seinfeld be Jerry Seinfeld. Mostly because he's my almost-name twin. But also because he's a funny dude and Seinfeld was a pretty glorious show.

So, what is The Move? The world may never know for sure, but oral is always a safe bet. In every situation. Wink wink. OK, now I'm just talking about sex, guys. Bye.