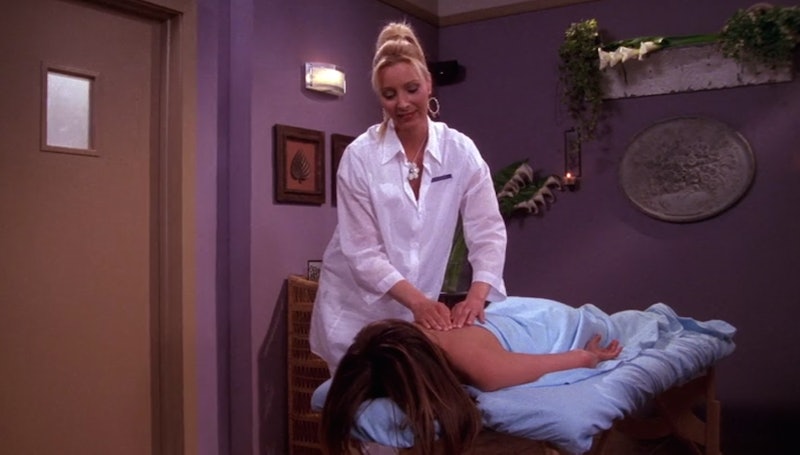 While I'm too messy to be a Monica and my hair is just not good enough to be a Rachel, I do have one major similarity with a female character from Friends. I share the same part-time career as massage therapist Phoebe on Friends . While Phoebe Buffay used music as a creative outlet with hits like "Smelly Cat," she also was a licensed to give massages for her day job. (She was one of the few friends who was always employed.) So, I'm here to analyze how Phoebe would hold up in the real-world. (Spoiler alert: I probably wouldn't go to her for a massage.)

You do meet a lot of interesting characters working in the field of massage therapy (both the people you work with and the people you massage), but that doesn't mean massage therapists are all a bunch of free-spirited hippies like Phoebe makes it seem. But, before you think I'm harping on Friends, just know that the thing I love about this show is the completely outrageous and unprofessional things all of the Friends do in their respective jobs. Phoebe just happens to be a bit of a personal connection for me. Plus, if anyone knows how ripe massage therapy is for joke fodder, it's me.

Here's how Phoebe stacks up:

Fake: Calling Herself A Masseuse

This is based on a pet peeve of mine instilled in me when I went to school for massage therapy in 2008. Massage therapists do not call themselves "masseuses" or "masseurs" (the masculine version) anymore. Perhaps it was a more acceptable term in 1994 when Season 1 of Friends premiered, but because of the, uh... unprofessional associations with the term, we go by the more professional title of "massage therapist." Since people think it's so funny to make happy ending jokes to me (nope, legit massage therapists don't do that either), it's important that we MTs have a serious title for a job that people don't take so seriously. Phoebe and her friends call her a masseuse on-and-off throughout the series, but if I were Phoebe, I would have banned my friends from calling me by that term.

In Season 7, "The One Where Rosita Dies," Phoebe told Monica and Ross she was strapped for cash because she had only given two massages that year so far and the people had been bad tippers. (Turns out the people she massaged were Ross and Monica... more on that later.) Of course, massage therapists never talk about tip amounts to clients, but, just like anyone in the service industry, it's natural to come home and rant about a bad tip day — especially since we just devoted a lot of time and energy into touching someone else's naked body.

Fake: Pressuring Friends To Let Her Massage Them

Phoebe gets upset that Monica thinks it would be weird to get massaged by Phoebe in Season 8's "The One with the Secret Closet." Although I don't think it's weird to massage my friends (it's in my job description to touch other people's bodies), I totally leave that decision up to them. While I can't speak for all professional massage therapists, people lose their identities for me once they are on my table and I honestly don't really think about — or judge —what people have going on physically. (Nope, I don't care that you didn't shave and I'm not staring at your fat.) The fact that Phoebe got so ridiculously upset that Monica was seeing another massage therapist is just immature. But, Phoebe being so sensitive came back to bite her in the end when it turned out that it was really weird for her to massage the groaner Monica.

Real: Needing To Do Another Job

Most massage therapists don't work only as a massage therapist since it's a lot of strain on your body and the money flow isn't always steady. In "The One Where Rosita Dies," Phoebe ends up working as a telemarketer to supplement her income. Legit.

Fake: Saying, "Put Your Face In The Hole"

Good massage therapists would never say, "Put your face in the hole" to a client (like Phoebe did to Rachel), even if they really wanted to. We call that hole by the much classier term of "face cradle."

Yeaaah, OK. We do say, "How's the pressure?" sometimes to check in with our clients.

Fake: Only Massaging People While They Lie On Their Stomachs

Phoebe is never shown massaging people while they are on their backs. For a full, traditional hour-long Swedish massage, your whole body (front and back) is massaged. So there would have been no way that Phoebe could have lied to Rachel for a full hour about being Ikea, the Swedish massage therapist in "The One With the Fertility Test." (Plus, you should always greet your clients before they get on the table.)

Real: Getting Hit On

I am lucky enough to not have had this experience, but if a client touches the massage therapist inappropriately, the therapist will terminate the massage. (That's the official lingo.) Phoebe had even more issues when her client Paolo hit on her during Season 1 in "The One with the Dozen Lasagnas" since he was dating Rachel. Paolo also demonstrated another awkward thing that happens to us massage therapists — clients taking off their clothes while we are still in the room. We don't want to see you naked — that's why you have a sheet over you! Please wait until we step out of the room to drop trou.

This idea had never even crossed my mind! In Season 4's "The One with the Ballroom Dancing," Phoebe was attracted to a client so she dressed up her feet to lure him in. You can massage barefoot, but if you work for a spa or salon, you are most likely wearing shoes. And, the lighting is pretty dim, so most clients have their eyes closed and aren't checking out your feet... at least I really hope not.

Real: Not Being Able To Date Your Clients

Phoebe's feet flirting worked with her client Rick, but she did the right thing by saying she couldn't be his massage therapist since she wanted to date him. Most employers would never allow you to get personally involved with a client, and if you were to do so, you'd have to stop being their therapist. Just don't make out with your married client on your massage table or you'll definitely be fired — and crestfallen — like Phoebe was.

Before Phoebe told Rick she was interested in him, she did the worst draping I've ever seen. (Draping is the method of moving the sheets to keep the important parts always covered.) She just lifted up the towel to expose his butt... and then bit it! Obviously, this wouldn't be acceptable in pretty much every line of work, but perhaps the most fake thing about this is that he came back for a second massage after that incident.

Phoebe's sentiments were spot-on about how she feels about her job when she told Monica, "I'm a professional and I'm really good." Everyone thinks they can give a massage, but it's a craft that us professionals continually work on and are proud of. We have hours and hours of training, exams, and continuing education. (I went to school for 11 months to get certified and each state has their own requirements for you to get licensed.) Plus, it's an awesome feeling when people tell you how good they feel after you've massaged them. But, maybe Phoebe should have rethought that whole "professional" statement when she was using Ross' apartment to give massages right in his doorway.

Perhaps the most fictional thing about Phoebe's massage therapist is the fact that she's really god awful at the job. Not only are her nails too long (you gotta keep those puppies as short as physically possible), her body positioning is way off (massage therapists are continually concerned with their body mechanics to avoid injuries and strain). Even the way her clients are positioned on the table is wrong. (Look at Monica's arms in the above photo. Do you think that's conducive to relaxing muscles?) Once a person gets on my massage table, it's my job to place his or her body in the best possible position for the massage.

Then again, it's not like Lisa Kudrow went through my extensive training just to play out a few hilarious jokes on Friends. I suppose I can forgive her.