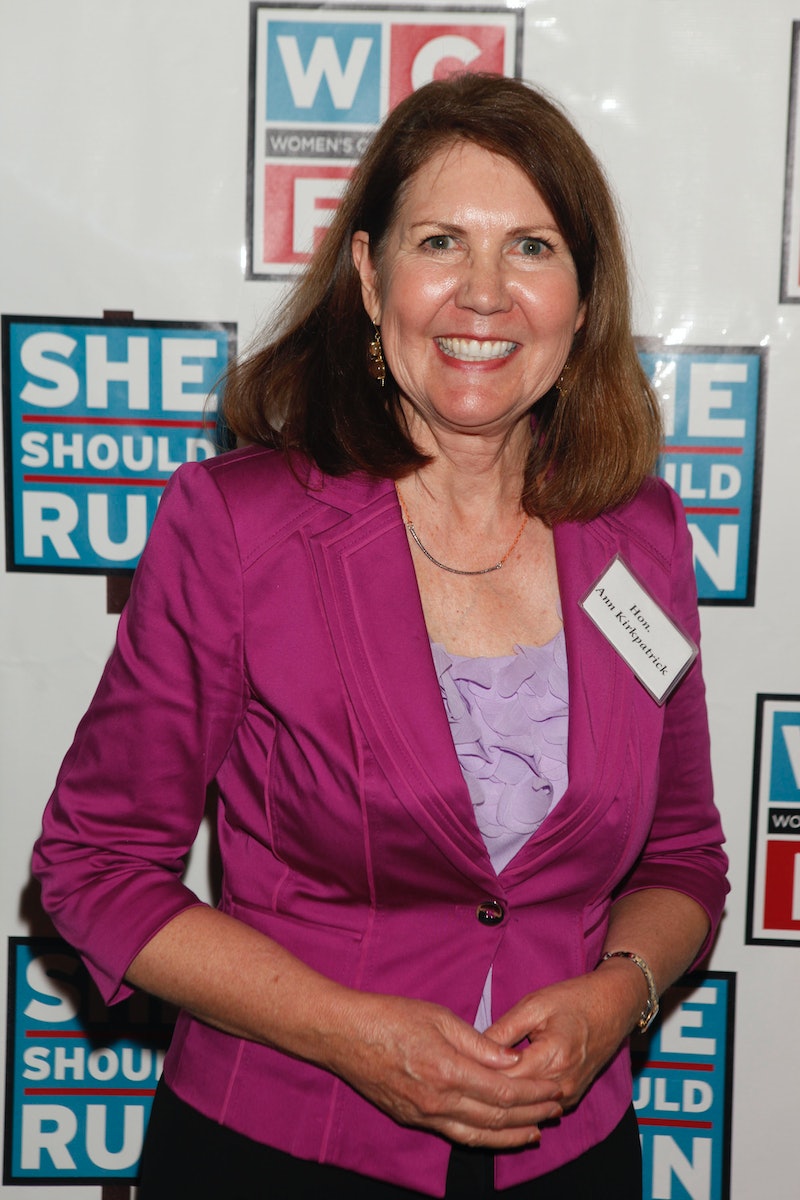 Come November 2016, there could be a new senator in town. Arizona Rep. Ann Kirkpatrick is running against John McCain for his senate seat. On Tuesday, Kirkpatrick announced that she is challenging the five-term incumbent and former presidential candidate for the U.S. senator position. As a female Democrat in the heavily Republican-leaning state, Kirkpatrick is an exciting figure for the state's liberals and the nation's feminists, but she's facing an uphill battle in her bid to become senator. In fact, local Republicans are speculating that this move is in response to the likelihood that her district — which she has already fought to hold onto in previous elections — will be redrawn to favor GOP candidates.

First of all, who is Kirkpatrick? According to a YouTube video announcing her intentions, Kirkpatrick's Arizona roots run deep. "I've lived my whole life here," she said. "That's my dad's general store in White River. Here I am with my mother who was a teacher on the White Mountain Apache Nation." Kirkpatrick graduated from the University of Arizona with a bachelor's degree in social studies, then later earned a law degree there, before becoming Coconino County's first female deputy county attorney, and then the Sedona City Attorney. She won her first congressional race in November 2004.

As a moderate Democrat, Kirkpatrick has gone against the grain in terms in of a red-leaning state, including by voting for the Affordable Care Act, a move that the mostly rural and poor population in her district supported, according to The Hill. During her most recent congressional campaign, she defended the decision in a debate, saying, "I talk to people almost on a daily basis who now have coverage they never had before. Thank heavens."

She also knows how to be bipartisan, reaching across the aisle in joining Republicans to call for a review into two solar companies' "deceptive business practices" and in supporting a copper mine in her district, the Phoenix New Times explains.

Kirkpatrick is also no stranger to close, contentious races. In 2010, she lost her congressional seat, before winning it back in 2012. In 2014, she barely held onto her position against former Arizona house speaker Andy Tobin, with much help from her district's Native American population. Yet the congresswoman faces a tougher battle against Sen. McCain, who outdraws her in name recognition and has already raised $3.5 million for his re-election campaign.

So far, McCain's camp has pointed to a National Republican Senatorial Committee comment when it comes to Kirkpatrick's intentions. Committee spokesperson Andrea Bozek portrayed her as a Washington insider who has harmed her state: "She doesn’t doesn’t believe we should ‘second guess’ President Obama which is why she supported Obamacare, his trillion dollar stimulus that crated jobs in China and cuts to Medicare. There is no question Ann Kirkpatrick has made life worse for Arizona families,” Bozek said.

Kirkpatrick has taken care to underline her commitment to Arizona and its families. In her announcement video, she said, "I'm fighting for Arizona every single day, and I'd be humbled to represent our state in the United States Senate." She also addressed Sen. McCain directly in her video: "I respect John McCain's service to our nation. I just believe our state's changing. Arizonans should have a real choice who they send to the United States Senate."

Kirkpatrick also focused on the cowboy boots that she "bought with [her] waitressing tips," both to portray her connection to Arizona's working class and to fight back against sexism. Last September, the National Republican Senatorial Committee produced an arguably sexist ad portraying Kirkpatrick as a headless body. Kirkpatrick's campaign fired back in a comment to MSNBC through a spokesperson, who said, "The NRCC really blew it. They’ve been in Washington too long — or in the 1950s. Either way, Ann is more likely to be wearing cowboy boots and kicking up dirt."

Later that month, the campaign issued a response ad, centered on how helpful her boots are in Washington D.C. "When Congress tried to give themselves free taxpayer healthcare for life, I put my foot down," Kirkpatrick said. Expect more references to cowboy boots and Kirkpatrick's down-home roots as this campaign heats up.

More like this
5 Concrete Ways To Take Action Against The Rwanda Deportation Plan
By Rachel Mantock
How 5 People Upended Their Lives To Fight For Abortion Rights
By Hannah Smothers
Boris Johnson’s Leadership Is In Question – Again
By Bustle UK
17 Powerful Photos From March For Our Lives Protests Across The U.S.
By Michelle Toglia
Get Even More From Bustle — Sign Up For The Newsletter