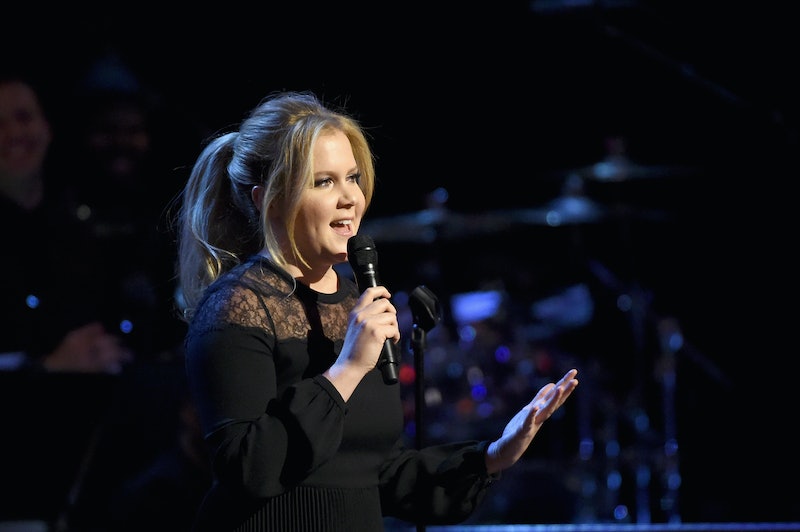 Back in Nov. 2014, the fact that Bill Cosby would not be charged for the rape allegations against him was revealed. Six months may have passed, but Inside Amy Schumer (and many others) have not forgotten and Amy Schumer targeted Bill Cosby with a sketch in her "80s Ladies" episode on May 26. The entire episode embraced the nostalgia of the 1980s, with the most controversial sketch (for Cosby supporters) being when Schumer defended Cosby in a court of public opinion. With celebrities like Whoopi Goldberg and Rush Limbaugh defending Cosby in the past, Schumer's parody showed how nonsensical it is for all people — celebrity or not — to simply dismiss or ignore the allegations against the formerly beloved comedian just because it's simply easier that way.

Remember the good old days when you could watch reruns of The Cosby Show guilt-free? Well, Schumer's lawyer wants to bring back those days. Although Cosby's jokes were not always clean, he represented a lovable "familial father figure" to many children of the 1980s with his Dr. Huxtable, his outrageous sweaters, and his JELL-O commercials. As someone who grew up 10 minutes outside of his hometown of Philadelphia, Pa., Cosby represented a comedian who was more a real person than a celebrity. When I was a child, I'd sing along to Cosby's stand-up about making his kids chocolate cake for breakfast — an iconic bit from Cosby that Schumer capitalized on to convince her jury of Cosby's innocence.

Schumer used Cosby's public persona that he conveyed over the years to show that it's just more comfortable for those of us not involved directly to believe that Cosby could not possibly guilty. Like Schumer passionately told the jury (after handing out pudding pops and Cosby sweaters to them), "If convicted, the next time you put on a rerun of The Cosby Show, you may wince a little. You might feel a little pang. And none of us deserve that! ... We deserve to dance like no one’s watching — and watch like no one’s raping."

But whether he's Mr. Huxtable or not, every rape allegation should be taken seriously. Period.

As you may well know by this point, Cosby's lawyer released this statement when allegations began to surface:

Over the last several weeks, decade-old, discredited allegations against Mr. Cosby have resurfaced. The fact they are being repeated does not make them true. Mr. Cosby does not intend to dignify these allegations with any comment. He would like to thank all his fans for the outpouring of support and assure them that, at age 77, he is doing his best work. There will be no further statement from Mr. Cosby or any of his representatives.

You might not feel raped by watching The Cosby Show, but Schumer's sarcastic stance on how Cosby is perceived by the public should make us all question ourselves when we passively support Cosby's entertainment ventures or don our Cosby sweaters. (I'm looking at you, "80s Ladies" cameo Jerry Seinfeld!)

More like this
Why Sadie Sink Is Hopeful Max Will Return In Stranger Things Season 5
By Brad Witter
'Stranger Things' Star David Harbour Has This Actor In Mind For A Hopper Spinoff
By Alyssa Lapid
What Working At Marvel Is Really Like, According To A 'Ms. Marvel' Co-Creator
By Gretchen Smail
'Schitt's Creek' Star Sarah Levy Named Her Baby Boy After Her Famous Father
By Jake Viswanath
Get Even More From Bustle — Sign Up For The Newsletter