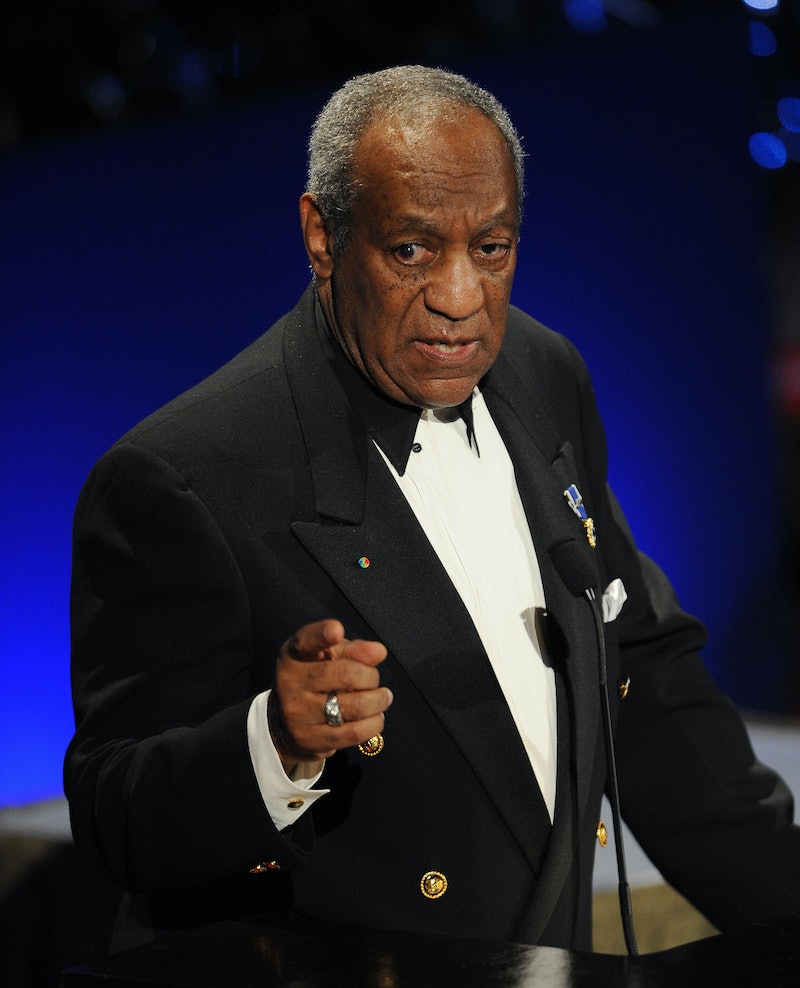 Nearly thirty women have come forward to accuse Bill Cosby of sexual assault. Thus far, he's played mum on the topic, only addressing it indirectly by thanking the people who are on his side. Now, Bill Cosby has released a video message to fans, and it totally ignores the allegations that are piling up against him. In this writer's opinion, this is a pretty tasteless move, and pretending like nothing is going on really isn't the way to go.

Instead of acknowledging the stories of the many women who claim to have been sexually assaulted by the legendary comic, he uses the clip to promote his upcoming shows. A few months ago, he announced he intended to continue touring amidst the numerous accusations of rape.

In the video, he sits in front of an inexplicable blue curtain having a relaxed phone chat with his fans. “Yes, I’m going to be in Wheeling, West Virginia, Capital Music Hall,” Cosby says into the receiver. "8 o’clock show, that’s right! You know I’ll be hilarious!”

The clip ends with a statement that reads:

Considering the fact that the stories of Cosby's supposed misdeeds are disturbing, everything about that message fills me with an overwhelming sense of dread. Check out the clip for yourself:

At the moment, the LAPD is investigating the claims against Cosby and these allegations continue to just be allegations. However, his pattern of deflecting the significant criticism that has arisen against him is just wrong. Janice Dickinson, Beverly Johnson and many others have come forward with molestation claims against Cosby. To make things look even more damning, many of these stories seem to reflect each other.

Up to now, his responses have been limited and indirect. He cancelled a show in Boston apparently because of "weather" although a protest against him in the works probably didn't help either. He has obliquely commented on the melee by thanking fellow stars like Whoopi Goldberg, Jill Scott, and Eddie Murphy for supporting him. However, this simply isn't enough.

Whatever happened, Cosby's silence on the multiple allegations seems to communicate that he thinks all of this will just blow over. At the root of that notion is a belief that powerful men like him are ultimately immune to serious criticism, especially from women. Ultimately, he needs to learn that rape allegations aren't just something you can laugh off.

Back in November, Cosby's lawyer released the following statement explaining the comedian's official view of the situation:

More like this
Beyoncé & Madonna’s “Break My Soul” Remix Honors A Group Of Black Icons
By Stephanie Topacio Long
Christina Perri Reacts To Her 'Twilight' Song Being One Of YouTube's Most-Viewed Ever
By Radhika Menon
Beyoncé Is The First Woman To Have A No. 1 Album Since Adele Did Almost A Year Ago
By Radhika Menon
Britney Spears Is About To Make Her Music Comeback With Elton John
By Jake Viswanath
Get Even More From Bustle — Sign Up For The Newsletter