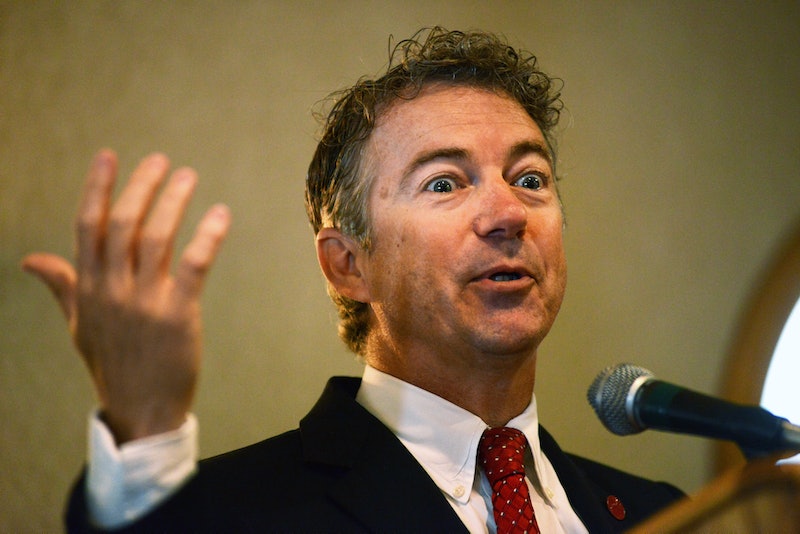 Oh, Rand Paul; an appearance on The Daily Show can go either way, and it looks like Jon Stewart might have gotten the best of you. Again. During Tuesday's episode, the Kentucky senator made a crazy First Amendment claim, a statement that was pretty unbelievable coming from a presidential candidate. So what exactly did Rand Paul say? Let's set the scene.

In his interview with Paul, which was part of a promotional tour for the Republican's third book Taking a Stand: Moving Beyond Partisan Politics to Unite America , Stewart asked about what he saw as contradictions within the GOP when it came to its stance on personal freedoms. Stewart recalled the outrage among some Republicans when developers announced plans to build a mosque near the site of the World Trade Center. Stewart said the same people who were opposed to the mosque are now in favor of Christian businesses refusing services to gay couples, all in the name of religious freedom. In an effort to tease out the differences, Paul replied:

When they told me that they were going to build a mosque at 9/11, I was horrified and thought that was a terrible thing, but I’m not for a law to prevent them. If you want to march down the street and you’re a part of the KKK, I’m horrified by that and I object to it, but the First Amendment is about the right to be despicable.

Whoa, whoa, rewind Randy. You're saying the First Amendment — the beloved opening to our nation's Bill of Rights, which protects Americans' rights for freedom of religion, freedom of speech, freedom of the press, freedom to assemble peacefully, and freedom to petition — is actually about the "right to be despicable"? Rightly so, Stewart was quick to interrupt him and tell Paul it wasn't accurate to compare a mosque with the Ku Klux Klan, a known hate group that actually committed pretty despicable atrocities in our history.

The First Amendment says keep government out of religion. It doesn’t say keep religion out of government.

Actually, according to the Establishment Clause in the First Amendment, the government isn't allowed to prefer one religion over another. So in a way, all or no religions are technically allowed in government. Anyways, check out Paul's egregiously bad SMH moment below.

More like this
6 Organizations Fighting Police Brutality That You Can Support Right Now
By Syeda Khaula Saad and JR Thorpe
'Brookside' Is Coming Back & Soap Opera Fans Are Going Wild
By Sam Ramsden
Eurovision Has Been Given A Whole New Look Ahead Of Its Liverpool Debut
By Bustle UK
This Is When Netflix Is Going To Start Charging You For Sharing Passwords
By Darshita Goyal
Get Even More From Bustle — Sign Up For The Newsletter
From hair trends to relationship advice, our daily newsletter has everything you need to sound like a person who’s on TikTok, even if you aren’t.