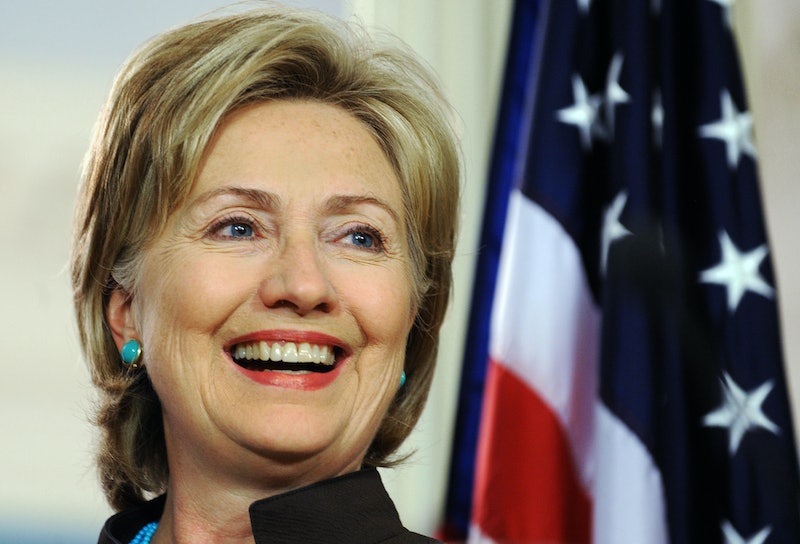 If there's one thing that Democratic presidential candidate Hillary Clinton knows well, it's what it feels like to be at the center of a firestorm. Whether from her time in the White House as First Lady, her tenure in the U.S. Senate, her 2008 campaign, or her years as Secretary of State, she's endured countless questions, accusations and attacks — some valid, many not. There's a sadly predictable element that pops up from time to time, however: All those times Hillary was attacked for being a woman, confronted with remarks, jokes, or pointed criticisms that rely on her gender.

After 2008, Clinton definitely understands the kind of scrutiny she's signed up for by jumping into the race, but it's a shame that she'll have to deal with so many double standards in doing so. Obviously, possibly being the country's first woman president carries a lot of historical heft, and that gives her some momentum that a no-name challenger might lack. But she'll also deal with some things this campaign season that her male opponents likely never will. Whether it's people grousing about her age (younger than Mitt Romney), quizzing her on her favorite fashions, or just being overtly, rudely sexist, here are four times Clinton's faced such nonsense.

This one happened in April. On his daily radio talk show — why stop at TV, I guess — Fox News host Sean Hannity let loose the following stream of sexism against Clinton, as detailed by Media Matters.

You know the one theme that they're playing up – I don't get it – that she's a grandmother. She stresses in the end of her book Hard Choices, the idea is to humanize her, frankly, how do I say, being a grandmother just means, to me, that you're getting older. Doesn't humanize you. Oh, she's a grandmother, grandma, what, are we going to call the president of the United States "grandma?"

She's aging, out of ideas, often shrill, apparently according to oral reports angry and clearly not inspiring. Marco's 43, Hillary's closer to 70.

Back in 2008, in the midst of his first presidential run, a lot was made about Clinton's qualifications — how she got where she is, whether she deserved to be considered such a huge early frontrunner, and so on and so forth.

MSNBC's Chris Matthews decided to offer up perhaps the least nuanced, most reductively offensive analysis of her political ascent possible, however — the idea that her career was the result of her husband's White House affair. Appearing on the cable channel's Morning Joe, as detailed by Politico, Matthews claimed:

To Matthews' credit, he ultimately apologized for the remark.

While appearing on MSNBC's Morning Joe back in 2008 — that show again, huh? — the hyper-conservative Pat Buchanan made some sexist remarks about Clinton, likening her to a sort of national nagging wife to an exasperated Mika Brzezinski.

[F]rankly, it's the voice. Look, Barack Obama has a very deep voice, he can go out and use mockery and ridicule and it comes off very smooth and pleasant. But when she raises her voice, and when a lot of women do ... it reaches a point where every man in America has heard it at one time or another.

When pressed, Buchanan conceded that it was a "sexist" remark, but insisted there was some truth to it.

According to Mic's Scott Bixby, conservative author and commentator Michelle Malkin has also dabbled in some ageist remarks at Clinton's expense — in a 2008 Fox and Friends appearance that Clinton "looks 92," and that "If that's the face of experience, I think it's going to scare away a lot of those independent voters that are on the fence."