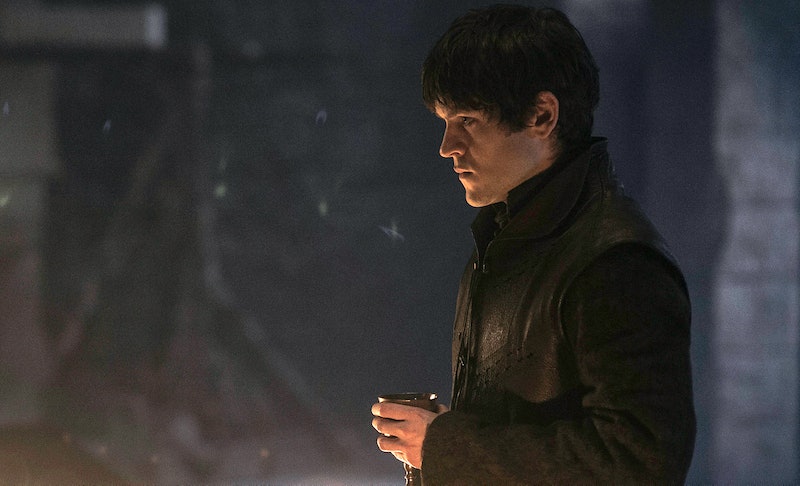 I never thought I'd say this, but I'm kind of starting to miss Joffrey Baratheon's presence on Game of Thrones. Joffrey's cruel games were awful to witness, but he was also just a cowardly little boy who often got put in his place by his elders. This is not to excuse his behavior, or say that he didn't inflict real harm and cruelty upon people. After all, he had Ned Stark beheaded in front of Sansa; he forced Lord Baelish's sex workers to torture one another; and he humiliated Sansa and Tyrion publicly on more than one occasion. Still, he was mostly just a vile and unpleasant nuisance who could be controlled, because he was too afraid to really take things into his own hands. In "The Lion and the Rose," I joyfully watched as Joffrey's head turned a strange shade of purple at his own wedding. Still, the series really hasn't been as much as high stakes since his demise. In fact, new Game of Thrones super villain Ramsay Bolton is far worse than Joffrey ever was.

When Ramsay Bolton, nee Snow, was first introduced to us in the second season of the series, I mistakenly thought very little about his presence. However, watching him torture, brainwash, and break down Theon Greyjoy, I soon realized that he was someone to watch out for. Joffrey sat on the Iron Throne ordering people about or hiding behind his mother. In contrast, Ramsay takes pride in doing his own dirty work. He also revels in the brutality of it all, taking his time to make sure that his victims suffer in the most unimaginable ways.

But in case that's not proof enough, here are seven reasons Ramsay is so much more vicious than Joffrey:

Joffrey was constantly throwing idle threats about when he got angry, and while he could be rather diabolical when he wanted to be, not all of Joff's threats were carried out. Ramsay, on the other hand, doesn't even bother having a conversation. Instead, he just proves time and time again just how horrible he is. In "The Gift" he pulls his new wife Sansa out of her room to show her the woman he flayed for being loyal to the Starks.

2. Ramsay is A Rapist

Though a few prostitutes get caught up in Joffrey's sadistic games, he doesn't seem to find pleasure in sexually violent acts themselves. Ramsay however repeatedly rapes Sansa even after promising never to hurt her. He's also been sexually violent towards Reek.

After sending two women in to pleasure Theon, Ramsay severs his penis him while taunting him about his sexual prowess. Shortly thereafter, Ramsay munches on a thick pork sausages in front of Theon, mocking him about his missing appendage.

Shortly after becoming king, Joffrey ordered that all of Robert Baratheon's bastards be slaughtered. He wanted to eliminate any claims on the Iron Throne; this decree includes babies. That act is obviously heinous, however the image isn't as shocking as Ramsay hunting down a woman he impregnated for sport. (Keeping this in mind, things probably aren't going to turn out well for Ramsay's newly pregnant stepmother.)

5. Joffrey's Mental Instability Could Be Blamed On His Parentage

Joffrey had "hair of gold" which mean that he was a Lannister through and through. Since he was the product of his mother and her twin brother, his instability could be explained by fault in his genetic makeup. Ramsay has no such excuse.

6. Ramsay Has A Friend

No one could tolerate Joffrey, not even his own mother. Somehow, the fact that Ramsay has found a kindred spirit in Myranda his lover makes him even worse. Before being legitimized and marrying Sansa Stark, Ramsay, and Myranda were to marry. For whatever reason Myranda seems not to fear Ramsay in the same way everyone else does. Also, they both get the same pleasure in engaging in sadistic acts with one another, both sexual and otherwise.

7. He Transforms Theon Greyjoy Into Reek

For nearly three season, Ramsay has taken the time to torture and torment Theon Greyjoy. Ramsay has reprogrammed the Iron Prince so that Theon no longer exists. In his place Ramsay has birthed Reek, a shell of a human being who exists only to serve his master.

Clearly, Joffrey wasn't the worst that Westeros had to offer.