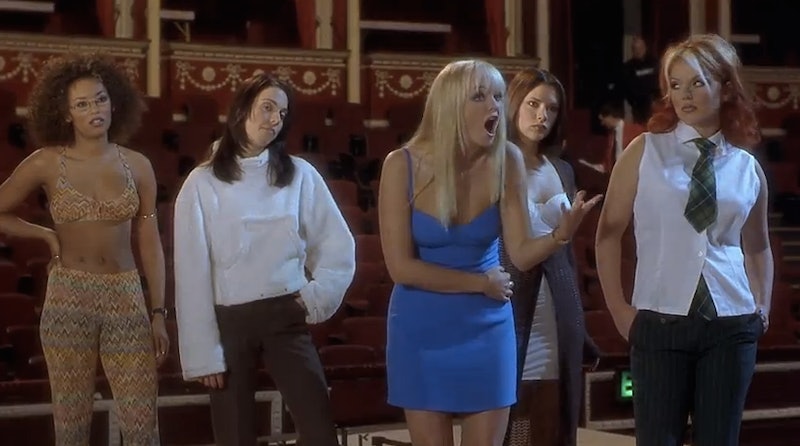 I hate to be the bearer of bad news, but Spice World MAY not be as wonderful as you remember it. I KNOW, I KNOW, it sounds sacrilegious to any girl who fought to be Baby during recess. However, when you rip off those nostalgia goggles, you'll find that the film is a convoluted mess with both scattered non-plots and infuriating subplots alike...making it the perfect candidate for a bad movie rewatch.

If you've long forgotten, Spice World is 1997's answer to The Beatles' A Hard Day's Night. That is, it tracks the new, Spice Girls-led British invasion by following the wacky adventures of the girl group. Those crazy kids just want to let loose and have fun, but they have a big live show in the works, and are constantly hounded by paparazzi and aliens alike — all the while they're neglecting their pregnant friend Nicola, whose existence makes no sense in the context of the movie. It's good fun, but if you're looking at it from a serious standpoint... well, the film can be baffling.

Since the humor in this film is that of self-parody and VERY tongue-in-cheek, I'll forgive a lot of its overall cheesiness. Still, here's 34 baffling things from your favorite childhood flick, Spice World.

1. Sporty, despite being pegged as the favorite for ambivalent fans, wears more lip gloss and frosted shadow than is regularly accepted in polite society.

2. Elton John probably got paid more for this cameo than you'll make this year.

3. Everything about their tour bus makes no sense, including that SWING.

WHERE IS THIS HANGING FROM?

4. Baby speaks Japanese to her fans.

Which makes sense, due to her secret life as Sailor Moon.

5. “When the speeding melon hits the wall, it’s Christmas for the crows.”

Not ironically, which is depressing.

8. "He's gone. Trevor left me. I knew Trevor was irresponsible, but now he's proved it."

HOW IS THAT NOT YOUR OPENING LINE? And how are the Spice Girls not DECENT enough friends to cater to her every whim?

11. Whenever Posh smiles, I want to curl up into a ball and sob.

I don't want to live in a world where that happens.

12. This paparazzi member is WAY too scary for a children's film.

1. That's not how godmothers work. 2. Does she remember these are the people who constantly forget her to pursue fame and platform boots?

15. When Baby says she wishes she could order boys like pizza.

And that's why she's my favorite.

16. Why is Scary wearing an space suit?

How does that fit into her persona?

Ginger made out with the one in the middle, which is good because he's the CUTE one.

20. The girls go to dancing boot camp, where they showcase the LITERAL ONLY MOVE THEY HAVE.

Really, look at ANY performance, it's all shimmy, arm wave, shimmy.

21. When this creatures comes out of the toilet.

And considering they can afford to put in a SWING in their tour bus, why exactly are the girls staying here instead of a motel or something?

Somehow, she still works it.

24. When they commit gentle nautical terrorism.

Telling children to shut up and all that jazz.

27. Almost done with the film and I have NO idea what this lady does.

Besides show up in that sad denim jacket, that is.

In which Nicola, unpregnant, is still DEEPLY useless. Is she just void of talent or something? Dude, that's when you either cut your losses or become a merch girl.

Probably because the Spice Girls were paying for their coffee with DREAMS.

30. When they take their VERY PREGNANT FRIEND CLUBBING.

What makes them think this is a thing she wants? Her feet are swollen, she's a second away from giving labor, she's recently broken-hearted, and these girls want to take her DANCING to their latest remix? HAS NO ONE HEARD OF A BABY SHOWER?

31. And not just that, it's like, a club from Party Monster.

And Nicola's just there, rocking another ill-colored cardigan.

32. And it takes all of 30 seconds before the Spice Girls, who took her out to celebrate their friendship, abandon her.

So now she's alone, and, like, 13 months pregnant — of COURSE she's going to go into labor now.

All in all, a distinguished masterpiece.