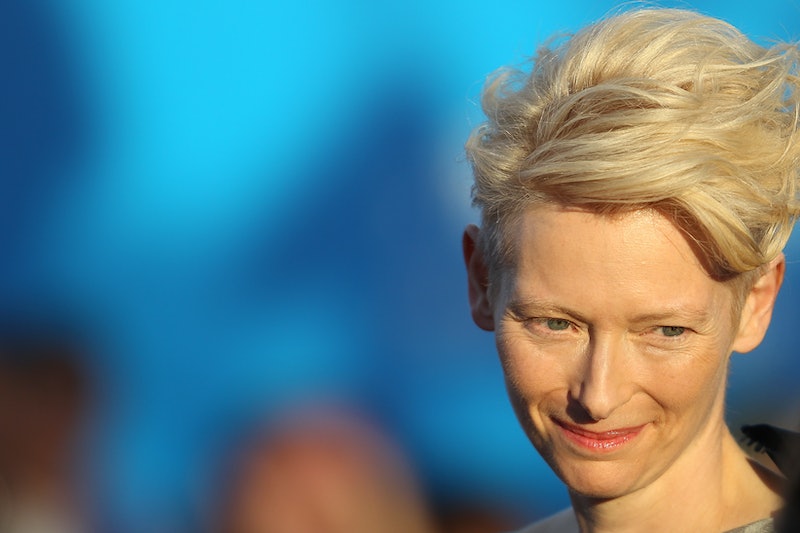 This is one of those casting announcements that makes you stop and think... "What the heck took them so long?" The Hollywood Reporter reports that Oscar-winner Tilda Swinton is in talks to join the cast of Doctor Strange, next year's entry in the Marvel Cinematic Universe following Captain America: Civil War, and every other casting director in the world is probably kicking themselves for not thinking of casting her in their comic book movies first. There's just something about Swinton that seems tailor-made for the fantastical world of superheroes — especially one as mystical as Doctor Strange. Not only is she exceptionally talented, but she exudes an aura of ethereal, androgynous sensuality that simply can't be replicated. And basically her entire career has proved that Swinton is a perfect choice to join the MCU.

In Strange, the 54-year-old actress would be playing The Ancient One, the Tibetan mystic also known as the Sorcerer Supreme, who teaches Stephen Strange (Benedict Cumberbatch) how to use magic to defend Earth from otherworldly threats. This casting decision is notable because throughout Marvel history, The Ancient One has always been drawn as a man. This gender-blind casting is definitely a step in the right direction for a studio under fire recently for its portrayal of female characters.

While I cheer Swinton on her way to (possible) super-heroic stardom, let's take a look at these seven roles that prove the actress has been preparing for this moment her entire career:

Swinton plays a man and a woman in this adaptation of Virginia Woolf's 1928 novel about gender fluidity. In the course of one 90-minute movie, the actress plays a handsome courtier who magically transitions into a woman at the age of 30 and proceeds to live through 300 years of British history.

Swinton continued to play with gender fluidity in this Keanu Reeves-starrer, in which she appeared as the archangel Gabriel, plotting to raise literal hell on earth. This was the first comic book adaptation on the actress's resume... and now, thanks to Doctor Strange, it won't be her last.

The Chronicles Of Narnia: The Lion, The Witch And The Wardrobe (2005)

Her role as the White Witch in this translation of C.S. Lewis's beloved fantasy tale proved that Swinton has no equal when it comes to uttering mouthfuls of mystical mumbo jumbo while maintaining a straight face. Her icy presence helped elevate this film above traditional kiddie fodder and into the realms of iconic villainy.

Swinton's role in this George Clooney vehicle as ruthless attorney Karen Crowder earned the actress a little gold man to put on her mantle. The fact that the MCU continues to attract such Academy-worthy talent just goes to show that, by the time of the studio runs out of material in 2173, every actor in Hollywood (and their mothers) will have played at least one superhero in the course of their career.

As a mother struggling with the knowledge that she's raising a psychopath, Swinton emotionally devastated audiences in this criminally underrated indie film. Being simultaneously terrified of and disappointed in your child is something that will come in handy for her role as The Ancient One: the mystic being is also responsible for training Baron Mordo, who goes on to become one of Doctor Strange's most famous supervillains. (Mordo will reportedly be the villain in Doctor Strange.)

Speaking of The Ancient One... Swinton should have plenty of practice for the role thanks to this recent supernatural drama starring Swinton as a centuries-old vampire named Eve. And who played her Adam? None other than the MCU's most famous baddie, Tom Hiddleston. (Perhaps he's the one who's helping convince his old co-star to join the MCU?) The actress should definitely have that "wise and ageless" routine down pat by now.

Another gonzo 2013 performance by Swinton, another film co-starring a famous member of the MCU. This graphic novel adaptation featured the actress terrorizing Captain America himself: she played iron-fisted Minister Mason to Chris Evans' downtrodden rebel in this terrific sci-fi thriller. Fun fact: in a move that could now be considered prescient, the role of Mason was originally written for a man, before being re-conceived specifically for Swinton.

And while some fans may worry about Swinton going "mainstream," this just seems to me like the next logical step in her career. I don't envision her succumbing to Hollywood blockbusters in the way that, say, Johnny Depp did post-Pirates Of The Caribbean. Swinton is truly a one-of-a-kind actress, and she'll continue to have a one-of-a-kind career, long after the highly-anticipated Doctor Strange has come and gone from theaters.